Although the truce that ended the 2014 Gaza war is still in force, the Israeli army has recently escalated its actions against farmers in the buffer zone between the Strip and Israel. 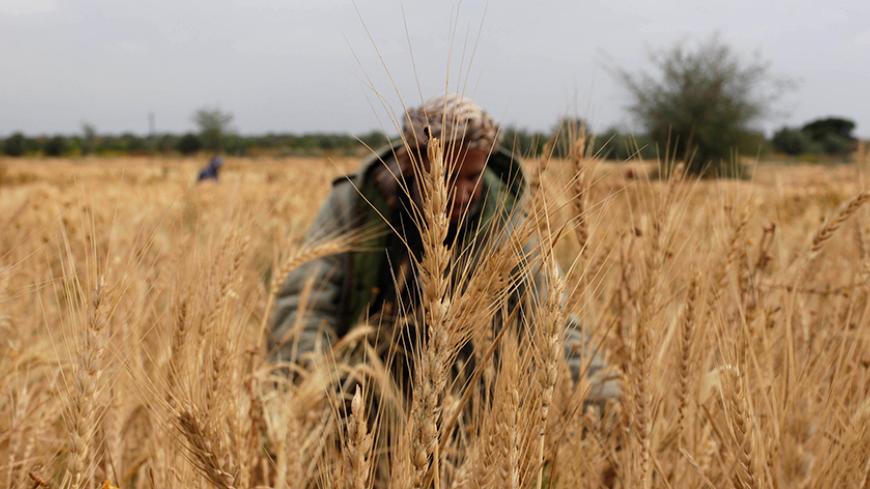 A Palestinian farmer harvests barley on a farm in Khan Yunis in the southern Gaza Strip, April 21, 2013. - REUTERS/Ibraheem Abu Mustafa

GAZA CITY, Gaza Strip — Palestinian farmer Ramadan al-Masry faced fear and anxiety as he harvested wheat and barley earlier this month on his land east of Gaza City, his eyes closely watching the movement of Israeli soldiers deployed along the border.

Angst seems to be the name of the game for Palestinian farmers within the buffer zone between Gaza and Israel, which measures 300 meters (328 yards) inside the Gaza border. Farmers fear what they say is constant shooting from Israeli forces openly defying a truce agreement signed in August 2014 between the Palestinian resistance and Israel in a bid to end the 2014 war on Gaza.

On May 1, Israeli Army Radio announced that the Israeli army would allow Gaza farmers to access areas close to the border to harvest their crops, in cooperation with the United Nations in the Gaza Strip under supervision of the International Committee of the Red Cross (ICRC).

Despite this understanding, however, Israeli forces continued shooting once in a while. On May 12, they fired on farmers and workers harvesting wheat in Khuza’a, east of Khan Yunis, south of the Gaza Strip.

Masry, his wife and six children harvested wheat and barley from their half-acre, which lies about 200 meters (219 yards) from the border. “We cannot work for more than two hours straight, out of fear of being shot,” he told Al-Monitor.

“The Israeli army prevented us from using machinery to harvest our crops; it only allowed us to use sickles. This slows down the harvest process and makes it harder. Despite our commitment to these instructions, we often get shot for no apparent reason."

In 2015, the Israeli army opened fire 194 times along the border line of the Gaza Strip. It also made 44 incursions, according to the annual report on the most prominent Israeli violations issued by the Hemaya Center for Human Rights in January.

In eastern Khan Yunis, farmer Rafik al-Najjar harvested his wheat crop with four workers. “This is our last hour of wheat harvest reaping. We made it safely,” he sighed with relief.

Najjar told Al-Monitor he began to harvest the crops in early May after he heard Israel was allowing farmers access to the zone.

“However, Israel did not allow us to reap our agricultural crops, and it made incursions into the buffer zone on May 4,” he added.

Ismail Haniyeh, deputy head of Hamas’ political bureau, commented on the incursions during his Friday sermon May 6 in the central Gaza Strip. “The resistance will not allow the occupation to impose a new equation, neither within the Gaza border nor in the buffer zone,” he said.

On May 7, the Israeli forces’ incursions ended and so did the confrontations with the resistance. This allowed farmers to return to harvesting, although the reprieve was short-lived: The army soon resumed sporadic but frequent firing on farmers.

“Despite the end of the military escalation, farmers are still working amid concerns because of the daily firing incidents from military towers along the Gaza border,” Najjar added.

The ICRC has not issued any media statements about the recent Israeli violations, and Al-Monitor could not reach ICRC officials for comment.

Medhat Helles, advocacy and media programs coordinator at the Agricultural Development Association in Gaza, told Al-Monitor, “Israel only allowed farmers to reap crops for a limited period of time, ending with the end of the wheat and barley harvest season, which does not exceed a week.”

He added, "Even still, farmers fear for their lives and are not working freely due to the repeated shootings taking place." He noted that the risk of fire does not stop at 300 meters, but can reach up to a kilometer (about half a mile).

According to Helles, Israeli soldiers asked farmers to stay 100 meters away from the border when harvesting crops in the buffer zone.

The buffer zone measures ​​22,500 acres and accounts for 25% of total agricultural production in the Gaza Strip, said Nizar al-Wahidi, the Land and Irrigation Department director in the Gaza Ministry of Agriculture.

“Ever since the end of the latest war on Gaza, Israel allowed farmers to cultivate this zone using short crops that do not grow higher than 80 centimeters [2.6 feet] such as wheat and barley, as it forbids them from establishing greenhouses or buildings there,” Wahidi told Al-Monitor.

He pointed out that after the truce was signed in 2014, farmers were able to return to the buffer zone to rehabilitate and cultivate their land. This led to a boom in agricultural production in Gaza. However, the Israeli army began shooting at farmers again in mid-2015, making them afraid to work.

For Helles, the buffer zone lands are among the most fertile and vital agricultural lands in Gaza, but they are not optimally exploited. Farmers prefer not to invest in the land because of the Israeli policies.