Farmers in Gaza are fed up with replanting their battered lands only for Israel to destroy them, and want negotiators in Egypt to guarantee their security. 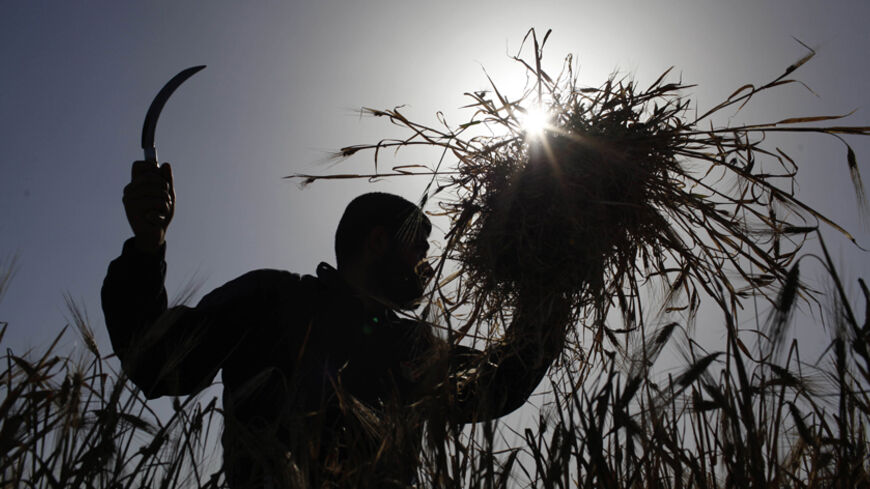 A Palestinian farmer harvests barley on a farm near the border of the southern Gaza Strip with Israel, April 28, 2014. - REUTERS/Ibraheem Abu Mustafa

KHAN YUNIS, Gaza Strip — Farmers in the border areas in the east of the Gaza Strip are voicing concerns over a renewed Israeli war. They fear the imposition of a buffer zone of up to 300 meters (328 yards) if no final agreement is reached with the resistance factions. Talks will take place during negotiations scheduled later this month in Cairo.

The state of calm, which has prevailed in the eastern regions since the announcement of the truce on Aug. 26, was not enough for farmers to rehabilitate their land because of fears of their being damaged again. The border lands are the first to be harmed in the event of a land invasion and the first victim of every Israeli war.

Khaled al-Batsh, a leader of Islamic Jihad and participant in the Cairo negotiations, was more blunt regarding the buffer zone: “There is no buffer zone,” Batsh said.

The Islamic Jihad leader told Al-Monitor that the 2014 truce “confirmed the 2012 agreement concerning Israel’s withdrawal to the zero limits,” implying there would be no Israeli buffer zone inside Gaza.

Nevertheless, the truce has been repeatedly breached, as when shooting targeted fishermen in the Sea of ​​Gaza, and in areas near farms in the eastern Gaza Strip. There was also the brief Israeli incursion at the border village of Qarara, east of Khan Yunis, on Sept. 11.

Farmers need guarantees that if they restore their lands they will not be destroyed again, but Batch offers little comfort. “Only God can guarantee the post-negotiations period. We are in constant conflict, the resistance’s power is there and Israel is responsible for any return to aggression,” he said. “The shooting in those areas is a violation of the truce and the Egyptian side has to hold the occupation to account concerning these violations.”

In the village of Wadi al-Salqa on the eastern edge of the central Gaza Strip, Akram Abu Meghsib bemoaned the loss of his crops, which were ready for harvest when he fled during the war. The fields escaped Israeli bombing, but the war meant no one tended to them, leaving all the crops in ruin. His zucchini crops, which were spread over a large area, turned yellow with brown leaves as they dried out due to a lack of water.

Near his land, acres of cauliflower turned black because of no irrigation. There were also many agricultural tents full of tomatoes, but they dried out, along with many vegetables that have not been seen in the markets since before the war.

As Ahmad al-Law inspected his agricultural land, he said he would have to restore his land for a second time, but would not do so without guarantees. “I paid everything I had. I even sold my wife’s jewelry to be able to rebuild the agricultural tents targeted by the bombing during the 2012 war. This time around, however, I will not repair them until I know what will happen after the expiration [of the cease-fire] and the return of the negotiations.”

In the village of Khuza’a, on the southeastern border of the Gaza Strip, the farmers’ tragedy increases by the day, because the land features have changed after being severely damaged. The lands were once full of olive and palm trees, but it's hard to imagine that now for only traces of the roots remain.

For his part, Jaber Abu Jamea, the director of the Economic Development Department in the Ministry of Planning and a farmer in the village of Qarara east of Khan Yunis, asked that the Cairo negotiations include the issue of the border areas.

In an interview with Al-Monitor, Abu Jamea said, “The negotiations are one thing, but what is happening on the ground is another. Since the truce in 2012, we planted the area near the wire fence, and we got to 200 meters [650 feet] away from it. There was no Israeli withdrawal to the zero borders as has been said.”

“After the overthrow of [former President Mohammed] Morsi in Egypt, the situation has changed, thus increasing the risk. The distance increased to 300 meters, but after the recent war, fears of accessing those areas [close to the fence] grew deeper among the farmers,” he said.

Nabil Abou Shmeleh, an official in the Ministry of Agriculture, told Al-Monitor, “What makes it difficult to determine the safe distance near the border is the lack of written agreements relating to the border area for the two parties to abide by.”

Al-Monitor visited the border village of Khuza’a. Umm Mohammed of Khuza’a, lost her home and farm, her only source of income, in the war.

Her house and farm are 400 meters (a quarter mile) from the border, in plain view of Israeli soldiers in one of the two Israeli control towers in the region. But Mohammed seemed unperturbed by their presence. “Before the war, we had lived here for 20 years. We were safe, the Israeli snipers shoot at anyone who comes near the limits of the wire, or [fire warning shots] in the air, but not on the houses,” she told Al-Monitor, sitting under a vinery she had set up herself.

However, Mohammed feared that the situation might change should negotiations fail at the end of the month. “The state of security that we lived in is history now. The recent war was the worst thing that we ever lived [through]. We do not know what is yet to come,” she said.

Umm Mohammed left sheep, pigeons, olive trees and vegetable greenhouses before fleeing her house to UNRWA schools during the war. “Israel swept [through] everything and now we do not have anything that enables us to replant the land. Even if we have money, we are afraid to invest it in vain. Everything will end if the war returns.”

In the vicinity of her demolished house, she pointed out the vanished features of her farm, saying, “I had a farm here, but all I have now are the pictures that I had taken weeks before the war started to show them to my son, who is a prisoner and whom I was supposed to visit in an Israeli jail last Ramadan. But war prevented me from doing so.”

She pointed to two pigeons above the ruins of the house, saying, “They are the only ones left out of 30; one of these pigeons stood on my shoulder the day we left the house.”

With the start of a campaign to distribute trailers to some of the farmers in Khuza’a, Umm Mohammed said, “We are 12 people. We cannot fit in a caravan. We are tired of partial solutions and I hope that the national reconciliation will take place and that the negotiations lead to a solution so that we reconstruct our destroyed houses and plant our lands quietly again.”