The disputes between Hamas and Fatah over the reconstruction process in Gaza have infuriated Gazans who desperately need assistance. 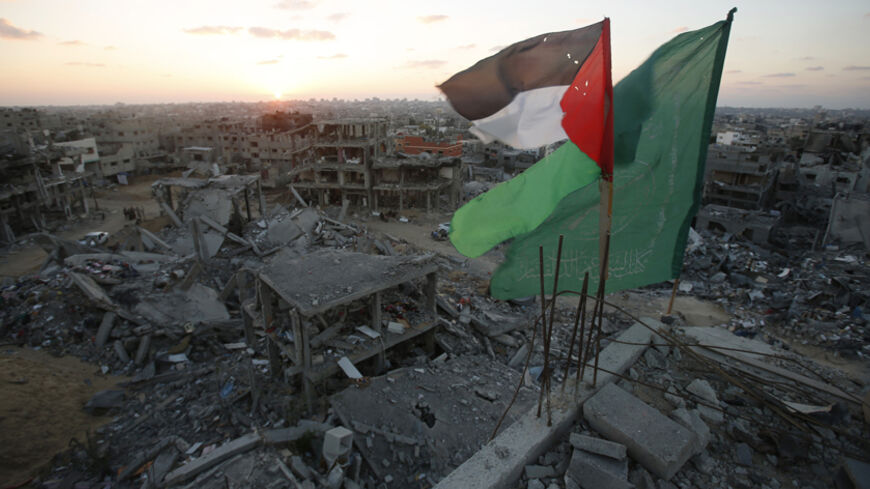 A Palestinian and Hamas flag (R) flutter atop the wreckage of a house in the east of Gaza City, Sept. 3, 2014. - REUTERS/Suhaib Salem

KHAN YUNIS, Gaza Strip — Umm Rashed al-Najjar sits in the shadow of a tent she erected next to her house that was flattened along with dozens of similar homes in the destroyed town of Khuza’a, east of Khan Yunis.

Nearby are hundreds of containers donated as temporary housing units for displaced families. Najjar and the families whose homes were destroyed were shocked at the sight of these containers, which they fear might become a long-term solution to their housing issues.

“These containers are not suitable for housing. We used to own entire buildings, and we are too many to fit in these. We absolutely refuse to live here. They [need to] start reconstructing our houses — we will not accept these containers,” Najjar told Al-Monitor.

She noted that the soil on which these containers are placed is only suitable for animals, adding that she has lost hope in seeing her house rebuilt anytime soon.

Gaza residents have numerous demands, which were carried by the Palestinian negotiators, and started to gain hope again when a cease-fire was negotiated in Cairo last month by the Palestinians and Israelis who seemed determined to make it work. 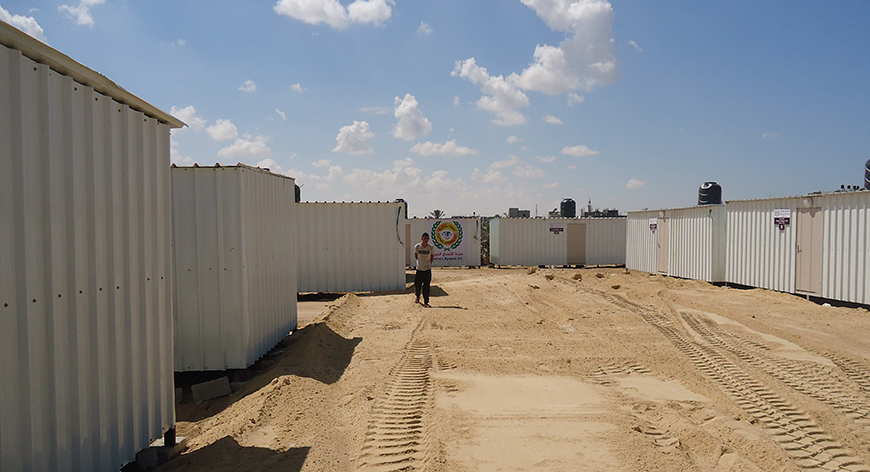 However, hope quickly faded away after the talks ended with the siege in place, in addition to Israel’s lack of approval over the building of a seaport and an airport for Gaza and allowing reconstruction materials to enter.

Ahed Farwana, a resident of the Shajaiya neighborhood, east of Gaza City, said that the situation in Gaza is getting harder by the day due to what he referred to as the crises resulting from the recent war on Gaza, which led to the destruction of life in the Gaza Strip.

“The general situation is not at all promising — the horizon is dark and there are no silver linings. The terms of the cease-fire agreement are not yet clear and we do not know exactly when the opening of crossings, the entry of construction materials and the reconstruction of destroyed homes will take place. The residents' hopes of living in freedom and with human dignity are gradually dissolving,” he told Al-Monitor.

He also noted that the return of the political bickering between Fatah and Hamas after the cease-fire, rather than turning their attention toward the people of Gaza, has aggravated these problems.

Frustration with Hamas and Fatah are widespread among Gazans, who feel their plight is being ignored for the sake of political point scoring. Khan Yunis resident Mujdi Fayyad told Al-Monitor, “The most important issue for Hamas and Fatah in their conflict on the Palestinian scene is related to posts. This is why they disregarded the suffering of the people. The issue of the people’s interests has become a secondary issue for both parties, as they only act according to their own interests. This has pushed us back to square one, right after the end of the war.”

Fayyad said that a significant part of the problems in Gaza will be solved when a real end to the division is achieved, adding, “We are aware that the partisan reconciliation determines the continuation and the end of the division, which is why all previous agreements failed and the next ones will also fail, should the parties hold on to their decisions.”

The unemployment rate in Gaza also spiked, especially among the youth, following the Israeli destruction of many institutions, trading companies, factories and agricultural lands. Many workers lost their jobs, while others still struggle with the lack of job opportunities.

“There are no job opportunities in Gaza and having a job seems almost impossible now, which makes me even more frustrated,” Hussein Nahdi told Al-Monitor, adding, “Like the rest of the young men here, I’m trying to remain psychologically stable, get married and have a family, but the situation in Gaza has postponed this plan along with several other plans until God knows when.”

According to Hussein, the shortfall in prospects and the postponement of many life plans, in addition to the lack of job opportunities, has forced thousands of youths in Gaza to take drastic measures, including dangerous voyages into the Mediterranean in the hope of finding a dignified life in Europe. “Despite the rough situation, emigrating is not my priority. However, the illegal immigration of residents from Gaza to Europe came as a result of the deterioration of the economic, social and political situation in the Gaza Strip, which was caused by the consecutive wars that destroyed the Strip’s elements of life,” he said.

Political analyst Hani Habib said that the current situation and the complex Palestinian scene, in addition to the “no-hope” situation, do not help in eliminating this social frustration.

“I believe that this situation would probably continue given the absence in the ability to find solutions and the loss of hope in the governing authority’s will and competence to overcome such a crisis,” he told Al-Monitor.

The Palestinian reconciliation government continues to disregard the minimum living requirements of Gazans, while Israel refuses to open the crossings, meet the Palestinian demands and allow the entry of construction materials into Gaza. Amid all of this, the people in the Gaza Strip are desperate and losing hope in life.