Two Gazans, a housewife and university student, tell of their daily struggles to pick up the pieces after the last war shattered their lives. 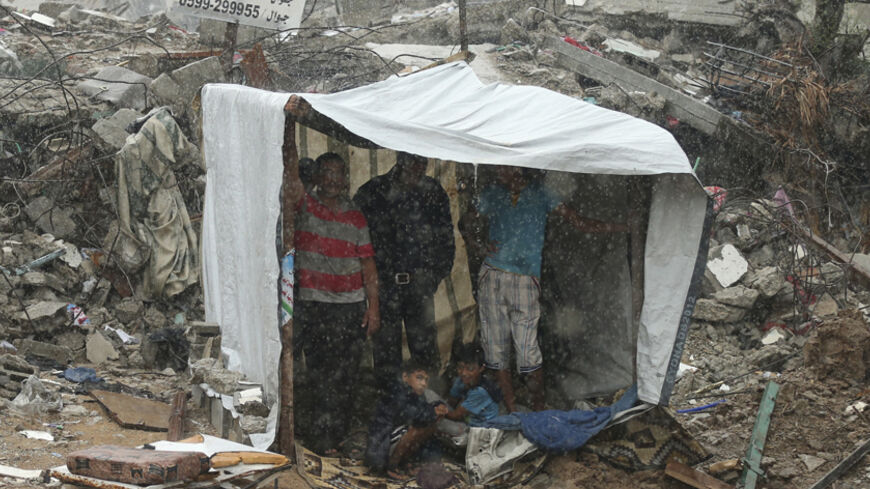 Palestinians take cover from rain inside a makeshift shelter near the ruins of their houses, which witnesses said were destroyed during the seven-week Israeli offensive, in the east of Gaza City, Oct. 19, 2014. - REUTERS/Mohammed Salem

A narrow hallway leading to the entrance of Umm Mohammed’s crumbling home in the Shaaf neighborhood east of Gaza City has become her only abode. Israeli warplanes destroyed her two-story house during Operation Protective Edge, rendering it uninhabitable. The family no longer has shelter.

Mohammed spends most of her time in the hallway, where she washes the family's clothes, cleans the dishes and receives visitors. However, she can't sleep there because it is directly adjacent to a busy street, and so she sleeps in the library of the mosque opposite her house, which was also bombed.

“I'm a woman, and can't sleep in the street like men. Once the daily evening prayers are over [around 8 p.m.], I head to the library of the mosque to sleep, and I wake up before the dawn prayers [around 5 a.m.] to start a new day,” Mohammed told Al-Monitor.

Her day starts by preparing breakfast for her unemployed husband and four children, and then she washes the family's clothes by hand. By the afternoon, she starts collecting firewood from the trees destroyed by Israeli tanks to cook lunch for her family.

“Israel has taken us 100 years back. We now live in tents and rely on firewood, just like our ancestors. We must collect water from a remote location,” she said, her voice filled with anguish.

While sitting on the floor cleaning the dishes, Mohammed said that her family was surviving thanks to donations from good Samaritans, who provide them with canned food. “We eat rice, beans, beef and canned sardines on a daily basis. This is the only food that people offer us.”

Before sunset, Mohammed sits on a worn-out couch that she put in the hallway, taking a moment to relax from the daily chores of looking after her family. She watches a number of workers who volunteered to build a small room for the family, to shelter from the cold and rain before the onset of winter.

“These workers used some stones from our destroyed house and built a small room for my family, but due to the lack of money, we could not build a concrete ceiling. The floor is made of sand, and its roof of tin. There is no way this room will keep out the cold and rain, but I’m hoping that we will be able to cope,” she said.

Mohammed does her daily housework despite the chronic pain she suffers from due to osteoporosis. “We no longer have the money to buy medicine for my treatment. Everything we owned is now buried under the rubble,” she said.

Mohammed fell silent for a moment and then added, “It was a large and beautiful house. We have lost our money and my gold jewelry. We've lost the future and the hard work of the past went down the drain. My biggest dream is to live again in my house, marry off my oldest son and see my grandchildren play. This is all I wish to see before I die.”

Adnan al-Najjar, a student majoring in health management at Al-Quds Open University, had just finished attending classes when he received a text message from his father telling him to get food assistance from an organization in Khan Yunis. "Everything changed after the war. I myself changed; I feel that I grew up 20 years," he told Al-Monitor.

It takes Adnan twice the time it usually takes him to go home after his classes to get from the university to the organization that assists affected families and provides food assistance. Sometimes he even has to leave in the middle of his lectures, which usually end at 2 p.m. He feels responsible for his family, but he only gets a few kilograms of sugar and flour.

Adnan is a thin young man who lost his home in the town of Khuza’a, east of Khan Yunis, during the recent war on the Gaza Strip. He was trapped along with his family under the rubble of his house when it was bombed by planes on July 24. After he emerged from the rubble, he was arrested by soldiers, despite his injuries. "My head was [the only part of my body] above the dirt during the bombing. I didn't expect that my family and I would survive. There was nothing around us aside from the [Israeli] soldiers and their police dogs, which approached my head to sniff at," he said.

His detention lasted five days, and he was released and returned to Gaza via the Beit Hanoun (Erez) crossing on July 28. His brother Khaled, however, remains in custody.

"I'm trying to focus on my studies, but it is difficult. The memories repeat themselves in my mind all the time. I close my book and drift back to the moment the house was bombed with us in it. I remember my brother Khaled, who was going to graduate from the faculty of law this year," he said.

Every morning, Adnan wakes up and stands at the entrance to the town of Khuza’a, waiting for a taxi to take him to Al-Quds University. However, this journey seems impossible following the war and Khuza’a having been declared a disaster zone.

"Even taxis no longer come to our area. I've lost my home, my brother is detained and the family has been split up. My mother is now staying at my uncle's home, my father is with our relatives and my sisters are with my married brother in Khan Yunis," he said.

Al-Monitor accompanied Adnan on his daily journey to his classes. He has to make an hour-long journey that requires three transfers to reach the university. Sitting among the ruined houses of Khuza’a and talking with his friends seems to be the only form of entertainment available to him. When he wants to study, he takes his book and sits on the ground beside the ruins of his home. His older brother Omar sits next to him and holds a book on teaching methods. The two are surrounded by rubble; it is a surreal scene.

Omar remains optimistic. “I am certain that there is nothing more important than education; therefore I will not give in to despair," he said. Adnan smiled and said, "I'm not hopeless, but the scenes of destruction do not leave my mind. My brother Omar was not here when the house was bombed with us in it."

Had Adnan not received an educational grant from Al-Quds Open University earmarked for students whose homes had been demolished, he would not have been able to enroll in his second academic year that started mid-September.

"Sometimes I feel that I need years of entertainment and psychological support to recover my strength, focus and my life as it was," he said.

Walking with Adnan in the streets of Khuza’a, a small village in which 360 homes were demolished, is like walking through a maze of ruins. However, he has memorized the shortcuts and side roads and uses them to lead us to his home. "Eight of my siblings are studying at universities. We know the value of education and it is the only way to improve our situation," he said.

The entrance to Adnan's home does not suggest what lies inside. While the entrance is intact, once inside you see that it is open to the elements. The bombs that hit this two-story home destroyed the inner stairwell and walls of the rooms, making it impossible to walk around inside without falling.

"Every now and then another part of the building collapses. The home is ramshackle, but rents are high so we prefer to study here until the winter comes; then we will move in with relatives," he added.

Adnan, like the Gaza Strip after the war, seems composed from the outside. He is heading toward new beginnings — a university student looking to the future. Inside, however, he is destroyed by loss, pain and memories.