A firsthand account of the intense shelling of Khan Yunis, which left scores of civilians dead and houses turned to rubble. 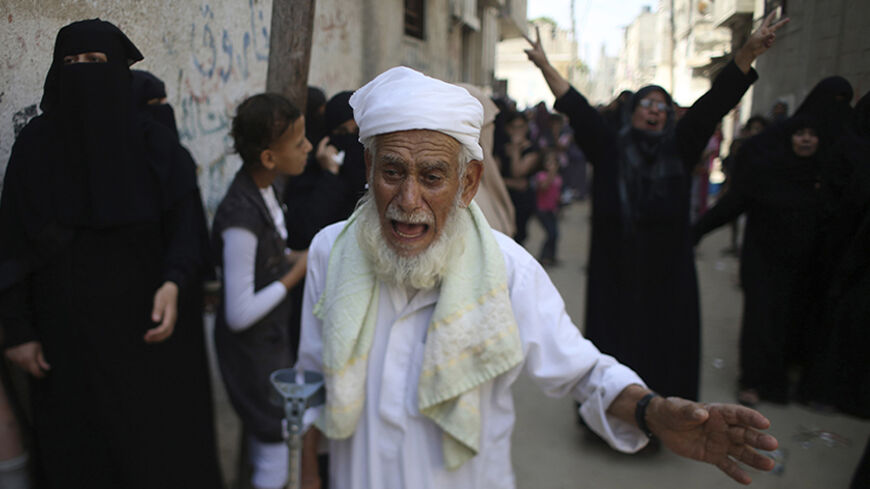 Relatives of a Palestinian man, who medics said was killed in an Israeli air strike, mourn during his funeral in Khan Yunis in the southern Gaza Strip, July 28, 2014. - REUTERS/Ibraheem Abu Mustafa

KHAN YUNIS, Gaza Strip — Magdolene Kodeih, a 27-year-old mother, thought that her baby Nadim had died. His head was covered in blood after the bombing targeted a house in the village of Khuza’a, where they were taking shelter along with more than 80 others. After checking on Nadim, Kodeih discovered that he was still breathing, and that the blood was that of the injured woman next to him.

On July 24, Al-Monitor interviewed Kodeih who was standing in line at the Nasser Medical Center in Khan Yunis, carrying Nadim in her arms and waiting for news about the rest of their relatives.

“We escaped early this morning with the help of the Red Cross after having walked out of the ruins. More than a dozen families were taking shelter in the house when the bombing [took place], killing everyone around us. But the bodies of the victims have saved my son Nadim,” Kodeih said.

Nadim, born on July 4, was not the only survivor. His sister Raneen and brothers Karim and Nassim appeared from under the rubble running toward their mother asking, “Where is Nadim? Where is Nadim?”

Raneen, 8, said, “I went looking for Nadim because he is small and cannot escape by himself.” Nassim, 4, still in shock, asked his father, “Dad, why did the house collapse on our heads?”

The father, Majed Diab, 34, told Al-Monitor, “The children did not understand how they survived the inferno during which the occupation army’s tanks and fighter jets fired shells targeting civilian houses.” Diab said they did not leave their home in Khuza’a for several days after the ground invasion, until they decided to move to their relatives’ house on July 22, but they all faced death there.

Diab recalls how fighter jets bombed the house of Kamal Abu Rjeily, describing how the doctor turned his home into a clinic to treat the injured from the area. He said that the Israeli army bombed the doctor’s house after noticing the crowds around it. The building was destroyed, while Rjeily was inside with his family. Several family members sustained injuries.

“We escaped as soon as I found my wife and kids. We walked on the streets along with others, including my injured sister. We passed by bodies lying dead on the ground. When my brother-in-law approached one of them, he found out that it was his son Rami. We covered his body and carried on, because waiting means dying,” Diab said.

On the morning of July 24, Al-Monitor attempted to get to Khuza’a — east of Khan Yunis in southern Gaza and bordered by the green line with Israel — and enter the village, only to find media vehicles parked 400 meters (0.23 miles) before the Ismail Abu Shanab Mosque. Israeli shells were fired randomly, reaching the middle of the main street adjacent to the mosque. It was extremely dangerous to move any closer. The area looked empty, and thuds of tank shells and warplane roars were the only sounds audible.

Mahmoud Abu Taymah, 47, from inside Khuza’a told Al-Monitor: “We escaped at the crack of dawn after the bombing reached its peak, and we miraculously survived. I took my children away from the eastern villages, but I stayed here at my relatives’ place, so I can check on my house in case the army withdraws.”

On July 26, a humanitarian truce was agreed upon for 12 hours. So Al-Monitor headed out to Khuza'a to check if baby Nadim had returned home. We managed to cross over to the Ismail Abu Shanab Mosque with the blue minaret. When we approached a large water tank, we saw some locals turning back. "Do not go closer to Khuza'a," said Mohammed Abu Amer, who was with his wife Umm Mahmoud. "The situation is serious. Tanks are still surrounding the village. We have heard that Khuza'a has been declared occupied dangerous territory."

Abu Amer added, "We tried to check on our house and bring some stuff for our children who are staying with relatives, but it seems it is a difficult task to achieve."

Khuza'a remained off-limits once again, despite the truce, and so Al-Monitor stayed on the town's border, watching tanks moving slowly. A civil defense vehicle was parked in the street, and firefighters were removing the rubble of a house.

"This was my house, I built it after many years of work inside Israel and now it was destroyed in a few seconds," the owner of the house, Majed Abu Tayr, said in despair.

The three-story building was a pile of rubble, with the stench of death coming from underneath. "I did not leave any of my children behind. But there are other bodies here. They could be the bodies of the refugees who tried to escape," he said.

The bulldozer was removing the rubble, only to stop amid the sudden screams of the people standing nearby. "Blood. Blood!" they shouted. They started to remove stones in search of those killed.

After the expiration of the truce, the Ministry of Health announced that it had removed 117 bodies from under the rubble from different areas in the Gaza Strip that were shelled by tanks. It seems that Khan Yunis is not only the largest province in the Gaza Strip, but also the province with the highest number of deaths, amounting to 306 victims of the more than 1,000 people who have perished since the start of the Israeli aggression on Gaza.

At the Nasser Medical Center, dozens of injured people were lying in hospital beds next to each other. They all told the same story — the story of the bloodbath the east of Khan Yunis, where the majority of locals work in agriculture and with livestock.

Mohamed al-Astal, 10, had serious wounds on his arm and right leg. He could not talk, but his brother, 26, said, "They destroyed our house with random shells. Our mom, Manal, died. We are waiting here for Mohamed to get better."

Abdul Karim, 12, sustained an injury to his liver. "I went with my father to get water. We were very close to the door of the house when we were shelled, but my father is fine," he said. His brother, Ahmed al-Agha, 24, said, "Yes, thank God, our father is fine." When we moved away from Abdul Karim, his brother whispered, "Abdul Karim does not know that our father, Tawfik al-Agha, died when we were shelled."

Issam Abu Ismail, 24, is suffering from severe burns, including to his face. "I was standing with two people near our house in Abasan al-Kabira, when the jet dropped a bomb. I knew they had died. I was suffering for a long time before I was carried away from there," he said.

Baby Nadim and his family have yet to return home. They are sleeping at their friend's house.