As winter draws closer, displaced families in the Gaza Strip are still waiting for reconstruction to begin on their homes. 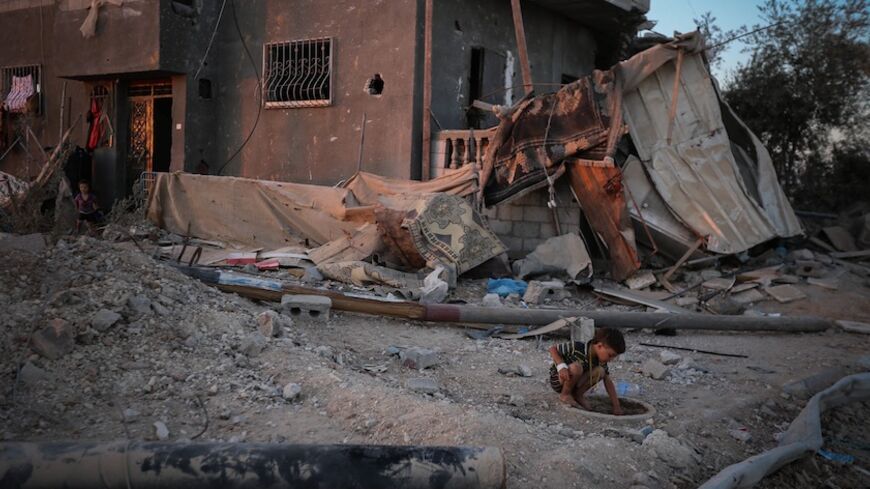 GAZA CITY, Gaza Strip — Umm Raed al-Abadla hangs her ​​children’s clothes on a rope she tied between two trees in front of her family's tent. The family has been residing here, outside Gaza's Shifa Hospital, ever since they fled their home on the Abed Rabbo farm, which was destroyed by Israeli artillery, along with hundreds of others during the recent conflict.

The hardship and homelessness caused by the displacement seem to have left their mark on Umm Raed. “This tent is made from pieces of worn cloth, and is our only shield from the heat of the sun, but what we are really afraid of is that winter will soon arrive and we have no safe home,” she told Al-Monitor.

She fears her eight-member family will be exposed to bitter cold and rain, which will turn their lives into an unbearable hell, noting that her family cannot afford to rent an apartment due to high prices, demand and landlords exploiting the situation.

According to a statement by the United Nations Relief and Works Agency for Palestine Refugees (UNRWA), around 60,000 housing units were damaged during the war on Gaza, of which 20,000 became uninhabitable. UNRWA stressed the need to provide financial support to ensure alternative housing for the displaced before the start of winter.

UNRWA, in partnership with the national consensus government’s Ministry of Public Works and the United Nations Development Programme (UNDP), has commenced assessments of damaged homes in the Gaza Strip, noting that all assessments should be complete within 60 to 90 days. The statement explained that UNRWA will provide financial assistance in the form of “rental subsidies” for an estimated 20,000 families with uninhabitable homes.

However, Umm Raed told Al-Monitor that her husband spends most of his time in another tent located on the rubble of their destroyed home, hoping the committees in charge of drafting the inventory and conducting the assessment of the devastation and damage will show up. “Until this moment no authority has provided any alternative housing for our family. We only hear promises,” she told Al-Monitor.

The distribution of small mobile containers, referred to here as caravans, was one of the alternative solutions to counter the threat. This was provided by the United Arab Emirates Committee for Charitable Works in Gaza, which equipped and distributed around a hundred mobile caravans to displaced people in the town of Khuza'a east of Khan Yunis in the southern Gaza Strip.

Children look out from atop one of the caravan containers in Khuza'a, Sept. 22, 2014. (photo by Motaz Al-Aaraj)

The head of the committee, Imad Haddad, told Safa local news agency that these caravans represent a partial and fast shelter solution for displaced families that can accommodate up to six individuals. He said there have been attempts to bring in more caravans to Gaza, yet, “for the moment we cannot bring in more, and we are waiting to have the opportunity to do so.”

Gaza resident Raafat Magari rejected the idea of using a caravan to house his family of 11. “This does not solve the crisis. These caravans are small and cannot be a safe shelter during the winter season,” he told Al-Monitor.

Magari and some of his children live in their partly destroyed home in the Shajaiya neighborhood east of Gaza, despite the danger of residing there due to cracked walls and ceilings. His wife and other children live in her father’s house, fearing their old home might collapse at any time.

"There is no place for us other than this destroyed house. I am afraid it will crumble all over our heads with the first winter rain shower, which will cause injuries and possibly deaths," Magari told Al-Monitor. "We want our destroyed house to be reconstructed and our family reunited. The concerned authorities must assume their responsibilities."

UN Middle East envoy Robert Serry announced on Sept. 17 that the UN, Israel and the Palestinian Authority reached an agreement allowing the start of reconstruction works in the Gaza Strip, ensuring the control of building materials so they are used for proper civil works purposes. Economic expert Maher al-Tabbah believes this solution “does not meet the needs of the Palestinians” and “does not give citizens the right to freely buy cement and construction materials.”

Tabbah, who is familiar with the details of the UN solution, told Al-Monitor, “Palestinians must obtain the approval of the Israeli side to build any residential units. The construction materials entering Gaza are subject to tight control by UN inspectors, who will track these materials until they reach the desired place of construction.”

He added, “This solution would force a citizen who wants to build an extra room in his house to obtain Israel’s authorization to buy cement and construction materials,” pointing out that it will require 20 years for the reconstruction of Gaza.

Mousa Abu Marzouk, deputy chairman of Hamas' political bureau, said at a political seminar, “The authority and the consensus government have received large funds and they can start the reconstruction of Gaza without the need to wait for the donor conference next month.”

During a meeting held between their delegations in Cairo on Sept. 25, Hamas and Fatah agreed on giving the consensus government full authority to spread across the Gaza Strip immediately.

Both movements asked the government to “achieve the required plans for the reconstruction of Gaza as soon as possible, while giving the utmost priority to the reconstruction of houses, schools and hospitals, which have a humanitarian mission to relief and to shelter the displaced and homeless.”

Unless the conference of donors for the reconstruction of Gaza is held, and the crossings are opened and the construction materials are allowed into Gaza, the displaced will have to face their fate during the winter season, with all the cold, rain and possible floods it could bring.