With the help of the Food and Agriculture Organization, the municipality of Um al-Nasser in the northern Gaza Strip launched a project to distribute lands to residents and train them to plant and export crops. 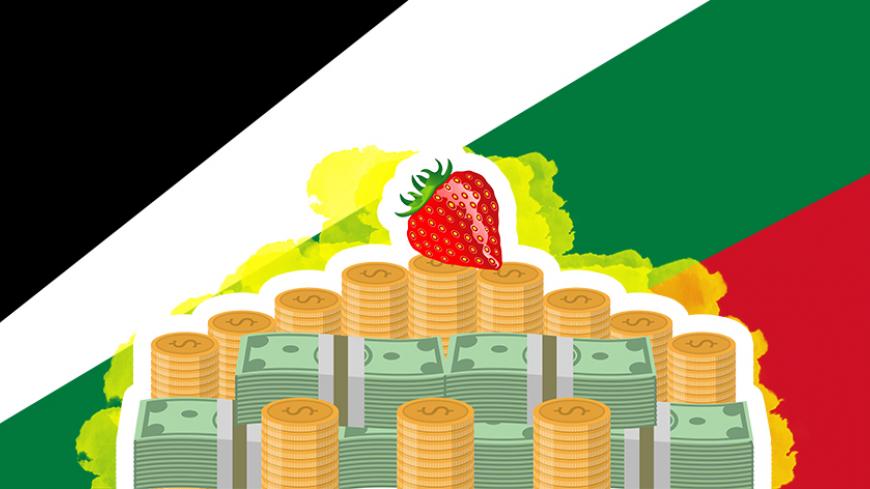 GAZA CITY, Gaza Strip — Strawberry season in the Gaza Strip comes to an end at the end of May. Some farmers in the village of Um al-Nasser in the northern part of Gaza, who started planting strawberries in December 2016, seem quite satisfied with this first-of-a-kind experience. They exported their strawberries into the West Bank and Israel and sold them in local markets.

The introduction of new crops was part of the project to reclaim desert or sandy land in the village, which the municipality first launched in cooperation with the Food and Agriculture Organization of the United Nations (FAO) in 2014.

The project aims to make these lands suitable for agriculture and then rent them to unemployed citizens from the village. An individual rents 2 dunams (0.5 acre) for an amount not exceeding $100 per year, a step that helps alleviate unemployment, which stands at about 41.7% in Gaza, according to a 2016 survey by the Palestinian Central Bureau of Statistics. In addition, the project allows residents to take advantage of state-owned border areas in a way that economically benefits citizens and the homeland.

In this context, Audi Abu Gharat, a farmer who participated in strawberry planting this year, told Al-Monitor, “I was unemployed and so were my sons, but once the project was launched we immediately registered to participate and we received 2 dunams each.”

Abu Gharat said he and his sons developed their agricultural skills in the joint training sessions given for free by the municipality in cooperation with FAO and the Ministry of Agriculture. They chose strawberry planting due to their significant revenues once exported, he said, noting that selling strawberries in local markets is not too profitable because they sell at cheap prices relative to their high production cost. At the beginning of the season, strawberries are sold for $3 per kilo (6.6 pounds) in local markets and $10 per kilo if exported.

Abu Gharat added that they intend to plant strawberries next year as well, since they had no difficulties in light of the relatively stable security situation on the border between Gaza and Israel for the time being.

Farmer Jomaa al-Abraq chose seasonal agriculture such as potatoes and watermelons. He believes it is economically profitable and it does not depend on the closure or opening of the border crossings with Israel because he directly sells the products in local markets. “I had never tried farming before in my life but the training helped, and I took advantage of the other farmers’ experience. Today, I know all about the smallest details and needs of each crop,” he told Al-Monitor.

Abraq explained that the municipality’s project is of great financial benefit for him because it provides a permanent income for his family and has helped improve his financial situation, regardless of the risk they take as Israeli soldiers have in the past fired at farmers, although the situation is calm at the moment.

Speaking to Al-Monitor, Ziad Abu Feria, the mayor of Um al-Nasser, said, “The project of reclaiming the land in our village aims to settle the sand dunes and then prepare the soil for agriculture, to improve the village’s economic situation and help residents escape unemployment.”

He pointed out that the municipality has agreed with the Land Authority to rent 800 dunams (198 acres) — over which an Israeli settlement was previously built — to unemployed residents for $100 a year (for 2 dunams), renewed automatically. He noted that 261 individuals have benefitted from the FAO project so far.

“After settling the land, irrigation networks were connected and the agricultural wells were dug; farmers are able to buy water cups for a very small amount of money,” he said.

Abu Feria pointed out that the municipality has been trying to provide advice whenever farmers may need it and supports them by giving the necessary training, noting that the project is of great economic significance, especially since it contributed to lowering the unemployment rate in the village by 25%, not to mention improving and developing agriculture there.

He explained that farmers are afraid the Israelis will use bulldozers to ruin their land or fire at them while they work, and that FAO stipulated that the land be about 600 meters (656 yards) away from the Israeli border.

Abu Feria said that the future plan is to help farmers develop their skills and encourage them to grow crops with higher economic returns, such as strawberries and watermelons, as well as improve the quality of their crops and export them, noting that farmers have planted about 24 dunams (6 acres) of strawberries this year and exported them.

Nizar al-Wahidi, the director general of Guidance and Environment at the Ministry of Agriculture, told Al-Monitor that the ministry prepared the soil for agriculture without using any chemicals and provided the necessary infrastructure and supplied irrigation networks.

“The project is of high economic viability, as it contributes to completing the food pyramid, increases the quantity of production and improves quality, especially since Gaza’s northern areas are known for their fresh water stock, unlike other areas, while the bottom soil structure is much better than the surface,” he said.

Wahidi explained that the ministry has worked to educate farmers about the needs of each crop and taught them about the market’s needs, to eventually achieve food sufficiency and security.

He pointed out that the ministry has a plan to set up similar projects, but it is waiting for support and funding from institutions to start implementing them. Wahidi noted that there is suitable land for future projects, especially in al-Muhararat (liberated lands), in the southern and northern Gaza Strip.

According to Wahidi, the Gaza Strip is self-sufficient when it comes to vegetables, except for onions and garlic. Meanwhile, strawberry planting has proven to be quite beneficial if the fruit is exported, although strawberries require huge amounts of fresh water. Today, the Ministry of Agriculture is looking to expand its agricultural scope to go in line with the needs and requirements of the market.