Why Israeli watermelons are making headlines in Gaza

As local watermelon supplies dwindle, the Ministry of Agriculture in Gaza has allowed the import of watermelons from Israel and lifted an eight-year ban to cover the daily consumption of nearly 600 tons. 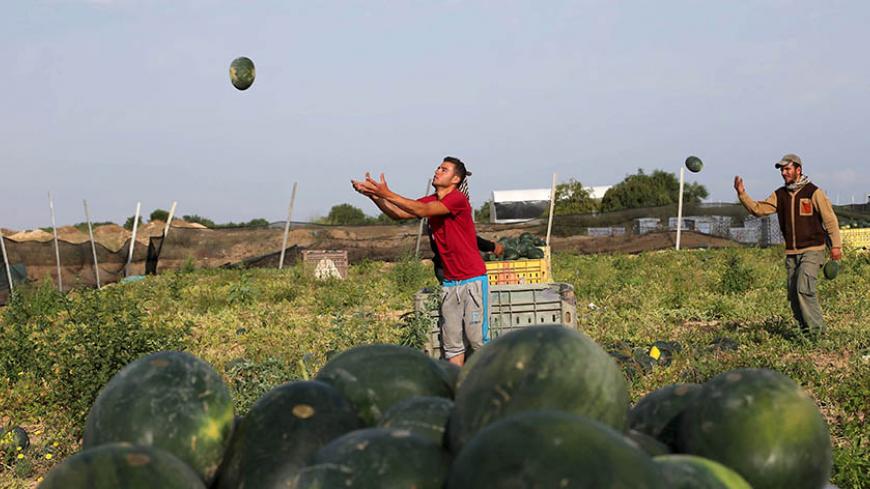 Palestinians collect watermelons at a farm in Rafah in the southern Gaza Strip, May 12, 2015. - REUTERS/Ibraheem Abu Mustafa

GAZA CITY, Gaza Strip — On June 21, the Palestinian Ministry of Agriculture in the Gaza Strip lifted an eight-year ban on watermelon imports from Israel. The Palestinian government formed by Hamas in March 2006 had banned the import of watermelons to Gaza from Israel and limited consumption to local production. Gaza’s annual watermelon crop hovers around 36,000 tons, which covers Gaza’s needs during the two-month summer season when the market registers a daily consumption of about 600 tons.

The Ministry of Agriculture in Gaza justified its import decision citing the rise of local crop prices due to the greed of some merchants and farmers. The price per kilo (2.2 pounds) reached up to 2 Israeli shekels (roughly $0.50), which is high compared to the price of watermelons during the same period in 2015.

Merchants and farmers attributed the watermelon price rise to the dwindling local supply, as the Palestinian watermelon crops have yet to ripen and areas cultivated for watermelon have shrunk from 4,500 acres to 3,500 acres, in light of a shortage of irrigation water.

After Israel’s withdrawal from Gaza in 2005, Palestinians used the land areas that were previously controlled by Israel to cultivate various fruits including watermelons, particularly in the western region of Khan Yunis and Rafah in the south — an estimated area of 1,500 dunams (371 acres).

In this context, Tahsin al-Sakka, the general director of marketing and crossings in the Gaza Ministry of Agriculture, told Al-Monitor, “The shortage of production and the monopoly by some farmers pushed us to import Israeli watermelons. If farmers and traders had reduced their prices, we would not have imported watermelons from Israel.”

He added, “Our policy is to protect national production and encourage farmers to cultivate the land and make use of it. In 2009 and 2010, 2,000 acres of land were cultivated for watermelon production. This increased up to 4,500 acres in 2015 for the production of approximately 36,000 tons, which is enough to cover local consumption.”

Sakka said that the ministry had only imported watermelons from Israel for three days (June 21-23), after which it gave farmers a deadline ending on July 3 to reduce their prices or else the ministry would keep importing from Israel.

“Prices are still high even after the deadline, which may push the ministry to import again from Israel,” he said, expecting the coming days to witness a price drop as Palestinian watermelons are likely to ripen around mid-July.

For his part, fruit trader Jaber al-Shanti told Al-Monitor, “The quantities that crossed into Gaza are limited and insufficient to cover the needs of the local market.” He said that 600 tons were imported between June 21 and June 23, which covers Gaza’s watermelon consumption for one day only.

He explained that the Ministry of Agriculture’s decision to import watermelons from Israel was issued because watermelon crops grown in the Gaza Strip have not ripened yet and because some farmers harvest too early in order to sell at high prices.

He also pointed to the bad quality of local crops since lands are cultivated three or four times a year and have lost all of their nutrients, not to mention the salinity of underground water.

Farmer and watermelon trader Khalil al-Suri told Al-Monitor, “Not only farmers should be blamed for the high prices as traders play a key role in this respect. Some of these traders — out of greed — increased their prices in light of the increased demand during the month of Ramadan.”

He said that Gazans consume watermelons as a basic meal at suhur (the first meal of the day during Ramadan) and that the supply this year witnessed some decline.

Suri predicted that the watermelon price would drop in the coming days, especially since the Ministry of Agriculture lifted the ban on the import of watermelons from Israel and the summer crops are about to ripen soon, which means an increase in the supply.

Al-Monitor met with residents in front of a shop selling watermelons in Gaza City; they blamed the Ministry of Agriculture for the high prices since it stood by idly watching traders selling unripe watermelons.

Government employee Ahmed Ali told Al-Monitor, “Watermelons this year are very expensive. No one can tell if a watermelon is ripe or of good quality. You may get an unripe or a rotten watermelon due to some fertilizers that farmers spray on the crop to speed up the ripening process.”

He added, “I bought three watermelons from a store days ago. Two of them were unripe, and when I tried to exchange them the same day, the seller refused.”

Gazans want their locally grown products to cover their market needs so that importing from Israel is not required. They believe the demand of homegrown watermelons will increase when their quality equals that of imported watermelons.