Each year around Eid al-Adha, the demand for sacrificial animals rises simultaneously with their prices, but more Gazans than ever are left unable to buy them as the already difficult economic situation worsens. 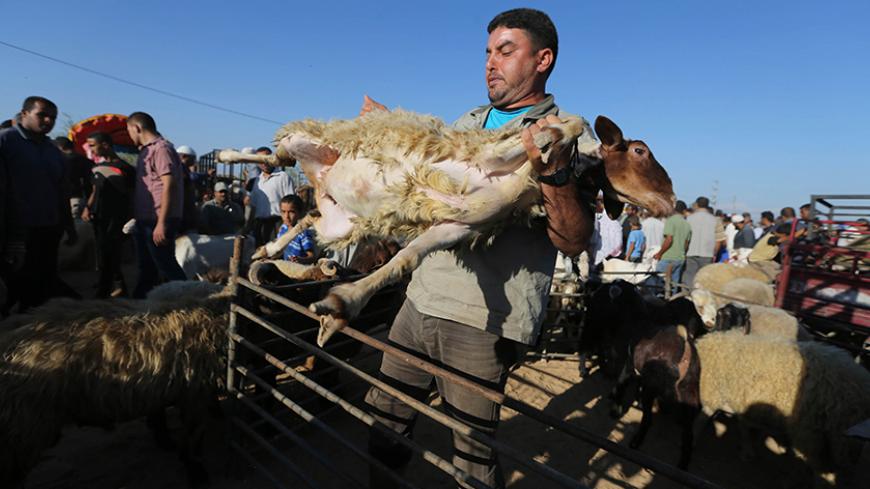 A Palestinian vendor carries a sheep as he shows it to customers at a livestock market ahead of Eid al-Adha in Khan Yunis in the southern Gaza Strip, Sept. 30, 2014. - REUTERS/Ibraheem Abu Mustafa

GAZA CITY, Gaza Strip — “They look around, ask about prices and then leave,” Ibrahim Suri commented on Palestinians who visit his farm, where there are hundreds of calves, cows, sheep and goats. He sees a high turnout before Eid al-Adha each year, the most important season for livestock traders, who sell large numbers of animals for sacrifice.

In an interview with Al-Monitor, Suri attributed the citizens’ reluctance to buy livestock to rising prices. This situation will result in heavy losses for him, as he recently bought a great number of livestock and could only sell a few. According to him, the prices increased by 20% compared with last year, and he does not believe prices will drop by the 2015 Eid al-Adha later this month.

Suri said that before the season is over, he will be forced to sell the livestock for lower prices than he paid for them. He has no hope of recouping his other expenses, including feeding and taking care of the animals and paying the salaries of the additional employees he had to hire for the season.

The livestock trade is an important economic resource for Gaza’s residents, and thousands of dealers, breeders and employees work in this field.

Yasser Sharab, who owns a clothing shop in central Gaza City, explained that he will not be able to buy his sacrifice for Eid al-Adha due to the high prices and a lack of funds resulting from the economic recession in Gaza. He said he told a few merchants that he will not buy livestock so long as their prices remain high, adding that the greed of some prominent merchants played a part in the rise in prices.

Fares Aslim, a truck driver from the Shajaiya neighborhood east of Gaza City, told Al-Monitor, “Almost every year, I and my seven brothers would buy sacrificial livestock. However, this year I will not be able to do so due to the hard financial situation I am going through and the livestock’s high prices.”

The director of the marketing department at the Gaza Ministry of Agriculture, Tahsin al-Sakka, explained that this time every year, livestock prices increase compared to the rest of the year as the demand rises among citizens who buy sacrificial animals to slaughter on Eid al-Adha.

Sakka told Al-Monitor that in Israel — the only source of livestock to Gaza after the closing of the tunnels with Egypt in July 2013 — there is a shortage of livestock because of increasing prices. The situation has pushed the Israeli Ministry of Agriculture to meet with prominent Israeli traders to discuss the lifting of taxes on the importation of livestock to encourage them to import large quantities. However, many Israeli traders refuse to do so, as global livestock prices are currently increasing because of the high demand among Muslims with the approach of Eid al-Adha.

He noted that the entire Arab and Muslim world purchases more cattle on Eid al-Adha, depleting supplies and raising demand. Prices in the Arab region and in Gaza are estimated to have increased by 20% compared with last year. For example, the price of a kilo of meat rose 7 shekels ($1.80) and is now sold at 60 shekels ($15.50), after it had been sold for 53 shekels ($13.60), according to Sakka. The price per calf in Gaza has reached 2,400 shekels ($615).

Sakka pointed out that since early May and until the end of June, Israel stopped importing livestock from Romania and Hungary — two of the largest suppliers of livestock — because of the emergence of foot and mouth disease there. Subsequently, Gaza was affected as well, as the Israeli livestock market is the only source for Gaza. Notably, livestock importation is not restricted by the Israeli authorities in their siege on the Strip.

In addition, Australia has refused to export livestock to Gaza after Australian animal rights institutions objected to how some butchers in Gaza slaughtered the animals.

One of the most prominent Palestinian livestock importers told Al-Monitor on condition of anonymity that prices will remain high until after Eid al-Adha because of the globally large demand on livestock before the holiday. The merchant denied the accusations that merchants control the prices, stressing that there is no supporting evidence for these accusations and that the Ministry of Agriculture oversees livestock importation and knows the prices before merchants bring them into the Strip.

He stressed that Gaza suffers from a general shortage of livestock that worsened after the latest war. Gaza needs some time to recover from its losses, which prompted merchants to import large quantities from Israel to compensate for this year’s shortfall.

Mouin Ragab, a professor of economics at Al-Azhar University, agreed with these assessments, saying that the free market system — in which prices vary depending on supply and demand — could explain the situation in Gaza. During this season and only once a year, demand on livestock increases and Muslims who are able to buy livestock take part in the holiday and sacrifice animals.

Ragab told Al-Monitor that Gaza’s production of livestock has decreased following the latest Israeli war. Merchants have thus been forced to import from abroad, and they often take advantage of this season to make higher profits.

Ragab linked the difficult economic situation in Gaza to the high prices, connecting the ongoing siege and closure of the tunnels with Egypt to a lack of financial liquidity in the hands of citizens. He expected prices of livestock to slightly decrease before the holiday should high quantities of livestock enter the Gaza Strip from the Israeli markets.