After Israeli settlers left, these Gazans planted more than eggplants

Since Israeli settlers withdrew in 2005 from south Gaza, the Palestinian government allowed investments in these lands that turned into crops that generate considerable profit despite the water crisis. 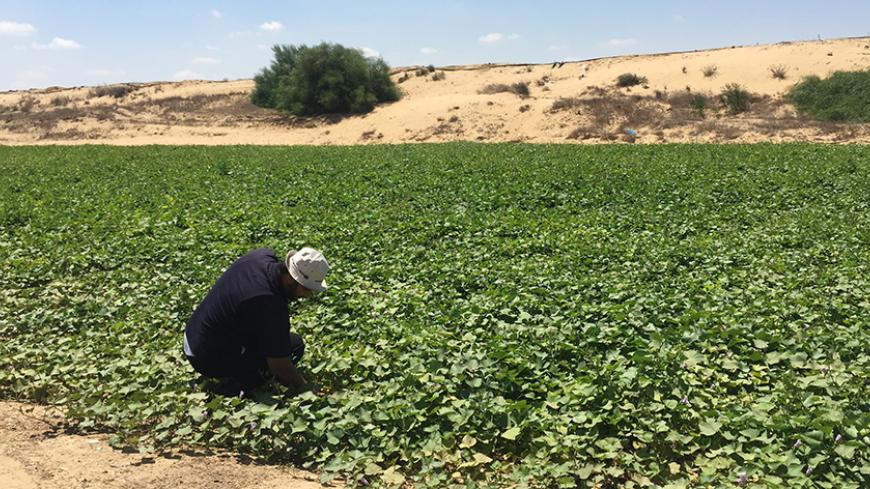 KHAN YUNIS, Gaza Strip — A vast agricultural area in southern Gaza was dubbed by the Palestinian Ministry of Agriculture in 2007 as Muhararat, or liberated lands. This term designates the settlements that were vacated by Israel in August 2005 and turned into Palestinian properties after 38 years. Ever since, the Palestinian government has been using these lands for cultivation, housing projects and resorts.

When former Israeli Prime Minister Ariel Sharon announced Israel’s unilateral disengagement plan in 2003, the withdrawal in 2005 was warmly welcomed in the Gaza Strip. Nineteen settlements and settlement outposts distributed in the south and north were evacuated, and checkpoints were abolished. These checkpoints had been established by the Israeli army during the second intifada in 2000 to impede the circulation of people and to cut apart the coastal strip, upon which Israel imposed a tight siege later in 2007.

In 2006, the Palestinian government announced the formation of the General Administration of National Muhararat, tasked with managing, protecting, investing and supervising the Muhararat while reaping profits from them.

Al-Monitor visited the headquarters of the General Administration of National Muhararat, established in a building that was not demolished by settlers and was previously a kindergarten for Israelis. It is now dedicated to Gazans. Israeli settlers destroyed the buildings during the evacuation process in August 2005.

In Muhararat Yarmouk, Mohammed Shaer, director general of the General Administration of National Muhararat, said, “Israel established settlements in Gaza on the best groundwater reservoir of fresh water, and those settlements occupied 15,000 acres in addition to the space dedicated to the security belt surrounding every settlement.”

“Border settlements are not subject to our control, and only 15 settlements remained within the Gaza border and subject to the general management of Muhararat. These are, from south to north: Rafih Yam, Beit Sidi, Moraj, Atsamouna, Bdoulah, Gan Or, Jadeed, Nivi Dikalim, Agnital 1, Agnital 2, Netzer Hazani, Kfar Darom, Netzarim, Dugit and Nissanit,” Shaer added.

Al-Monitor noticed during its tour around Muhararat that the settlements’ names have been changed from Hebrew to Arabic, and that some were combined together: Muhararat That al-Sawary combines the two settlements previously known as Rafih Yam and Beit Sidi. Muhararat Ain Jalut combines the two settlements previously known as Atsamouna and Bdoulah. Add to this, Muhararat Hamra al-Asad Ganour. All of these settlements have turned into fertile agricultural areas, and their production increases by the year despite Israeli obstacles, such as bombardment and preventing the import of production materials or the export of any agricultural surplus.

After their departure, settlers left modern buildings and productive agricultural land. Shaer said, “Sand dunes have been reclaimed, while a large number of lands have been invested with a variety of fields. The Muhararat management worked in cooperation with the Palestinian Water Authority and the Gaza Ministry of Planning and Housing to allocate spaces for universities, housing buildings and recreational and tourist resorts.”

During its visit, Al-Monitor also noticed that Palestinian factions established military sites across those Muhararat to train their members. Some of these belong to the Islamic Jihad, Hamas and the Popular Front for the Liberation of Palestine.

It should be noted that after the settlers left, the Muhararat territories came under the Gaza government’s control. But today, the government allowed investments in these lands, as the investment ratio has neared 100% after charities and nongovernmental organizations were allowed to rent them, such as the Al-Salah Society, the Kuwaiti Al Rahma Charity Association, the Human Appeal International-UAE and the Al-Sahaba Society, according to sources Al-Monitor spoke with.

In this context, Shaer noted, “A number of civil and charitable institutions took part in the management of those Muhararat by renting them in a bid to impede any individual control over them or the squandering of their resources. Also, there are lands in the Muhararat that were owned by Palestinian families, and these regained ownership after [the evacuation] in 2005.”

It is noteworthy that the agricultural Muhararat became self-sufficient in the production of some crops, which are offered at low prices, such as onions, watermelon, cantaloupe and seedless grapes.

Shaer said that in the past few years, mangos were cultivated in an area of 400 dunums (99 acres), which were previously cultivated by the Israeli settlers. He added that the Agriculture Ministry cultivated 100 dunums (25 acres) of almonds, 150 dunums (37 acres) of olives and 250 dunums (62 acres) of palms, in addition to guavas and apples. New crops will be introduced this year, namely walnuts and avocado.

“There is self-sufficiency as far as the local market is concerned, and this is quite an achievement. In contrast, there are a few crops that overflow this local self-sufficiency, but the closure of the crossings hampers their exportation,” Shaer said.

Despite the great success in the Muhararat’s agriculture, these [lands] suffer from the lack of water under the water crisis crippling the Gaza Strip. Shafiq al-Arrawi, soil and irrigation general manager in the Ministry of Agriculture, told Al-Monitor, “The Muhararat area exhausts about 8 million cubic meters [6,486 acre feet] per year, knowing that water consumption is not supposed to exceed 4 million cubic meters.”

“The size of the aquifer depletion will lead to a decrease in the water level and will increase the salinity of the water in those areas.”

In order to avoid this crisis, the Muhararat administration is working to find alternatives, including the use of clay soil. Rami al-Astal, supervisor of the citrus and potatoes cultivation in the Muhararat, explained the process to Al-Monitor, “All citrus trees have been surrounded with soil clay, which helps reduce the consumption of water. Meanwhile, potatoes, sweet potatoes and watermelons have been planted in the remaining Muhararat areas because these suit the sandy soil there.”

But another part of the soil is no longer suitable for agriculture, Astal said. “The soil in some agricultural greenhouses was affected by the powder rockets fired by the Israeli army on the Muhararat during last summer's war. Following examination, the soil turned out to be poisoned, and we were no longer able to cultivate it even a year after the war.”

Despite the significant agricultural production of the Muhararat, workers are affected by the salary crisis plaguing the Gaza government.

“Workers work here on a daily basis from 5 a.m. to 12 p.m. But when they ask me about their per diem rates and salaries, I cannot cater to them, so I give them some eggplants and pepper at the end of the day,” Astal said.

The cultivation of the Muhararat has formed an important investment and natural resource for the Gaza government and has raised strategic targets over the past years. However, these fields suffer from the surrounding political and economic unrest, which adversely affects any Palestinian attempt to cope with the current siege and decline of the government.