11 years on, have Gazans failed to invest in liberated areas?

More than a decade after Israel withdrew from the Gaza Strip, the liberated lands remain mostly empty, with analysts urging the Palestinian Land Authority to optimize the use and cultivation of these lands. 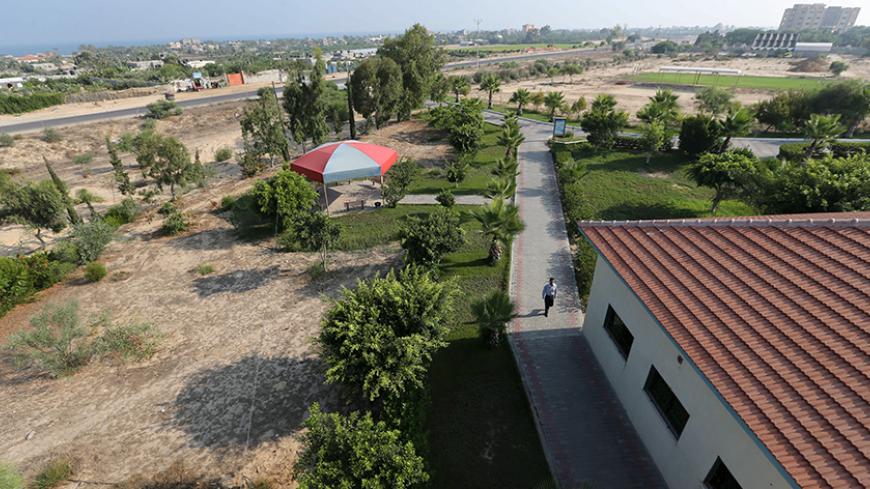 A Palestinian security guard walks at a university built on the former Jewish settlement of Neve Dekalim, in Khan Yunis in the southern Gaza Strip, Aug. 6, 2015. - REUTERS/Ibraheem Abu Mustafa

GAZA CITY, Gaza Strip — The last Israeli soldiers withdrew from the Gaza Strip on Sept. 11, 2005, as per the Israeli disengagement plan, which was set forth and started by Israeli Prime Minister Ariel Sharon on Aug. 15 of that year. The Palestinians dubbed the plan the “unilateral withdrawal,” as Israeli soldiers were redeployed on the border of Gaza. The Israeli army withdrew from more than 15,000 dunums (roughly 3,700 acres) of land it had occupied during the Six-Day War and the occupation of the West Bank and the Gaza Strip in 1967.

Gaza has a population of nearly 2 million people in an area of no more than 365 square kilometers (141 square miles). Meanwhile, the former 25 Israeli settlements in Gaza — which Palestinians call “the liberated areas” — constituted additional territory, after Palestinians had been deprived of that land for 38 years under the Israeli occupation. The pertinent question, however, is how Palestinians might take advantage of and invest in these liberated areas.

When traveling to the former Israeli settlements across the Gaza Strip, one sees largely untapped areas, save for a few residential projects carried out by international institutions, even though the Israeli withdrawal took place over a decade ago.

The Palestinian Land Authority (PLA) in the Gaza Strip is the government agency concerned with the lands. Amal Shimali, the head of the PLA's public relations and media office, told Al-Monitor, “The total of the liberated areas amounts to 5,000 dunums, where some international parties such as the United Nations Relief and Works Agency and the United Nations Development Program implemented housing projects, in addition to other similar projects for Palestinians funded by Saudi Arabia, the United Arab Emirates, Japan and Qatar.”

Shimali said that there are a few agricultural projects inside the liberated areas that promote domestic production and try to achieve self-sufficiency, in addition to other recreational projects and schools.

However, others argue that there is a lack of investment in these large empty lands in Gaza. Political analyst Akram Atallah told Al-Monitor, “It is true that Israeli troops withdrew from the Gaza Strip, bringing the killing and restrictions on Gazans to a temporary halt, but they returned a year later to besiege Gaza.”

He added, “Nevertheless, we cannot deny that the departure of the Israeli soldiers is positive. The occupation meant killing and clamping down on people. As settlers departed, the Gaza Strip was open to free movement, but unfortunately it was besieged from the outside. Yet generally speaking, Gazans have certainly benefited from the withdrawal of the Israeli army as the lands turned into Palestinian properties, which is the most important upside of the Israeli withdrawal."

Attallah said that the liberated areas revealed a lack of experience on the part of the Palestinians in terms of optimizing the use of available resources. “These lands are certainly not for distribution as they belong to the future generation of Gazans and serve as a strategic reserve,” he said.

He added, “However, these lands ought to be cultivated appropriately, especially since Gaza’s food basket is located to the east of Salah al-Din Street in central Gaza. This area [central Gaza] has recently been experiencing turmoil because of wars and the concerns of farmers to cultivate the lands [there] in light of the constant Israeli threat. Hence the liberated areas ought to be turned into a food basket, helping to regulate local agricultural products in Gaza.”

For his part, economist Moin Rajab blames the PLA for not being able to properly manage these lands.

“These liberated areas are ostensibly public lands and thus they fall under the responsibility of the PLA, which is supposed to manage them and use them for different purposes. Gazans ought to be taking advantage of these landscapes that were denied to us throughout the years of occupation. However, following the Israeli withdrawal, some random and hasty projects were set up,” Rajab said.

He added, “The [available] area of the lands is gradually decreasing given the ongoing projects such as private and charitable projects. Thus, it is imperative for the concerned authority to optimize its use as they not only belong to the current generation of Gazans, but also to future ones.”

Rajab stressed the importance of not having any party monopolize this land in the absence of sufficient study.

“It is through so-called central or structural planning that this can be done. The establishment of new schools is inevitable, and so we ought to know the future needs of schools. New hospitals, ministerial facilities, parks and houses are indispensable too. When we take these things into account, we find that there is a high demand for lands and little supply of liberated lands, which is why such lands must be invested well and appropriately,” he said.

More than a decade into the withdrawal of the Israeli occupation from the Gaza Strip and its deployment on the border with Gaza, the Palestinian governmental authorities seem to have failed to successfully invest in those lands.