The Palestinian government and the French Development Agency signed agreements that will support the development of agriculture and water networks in Area C. 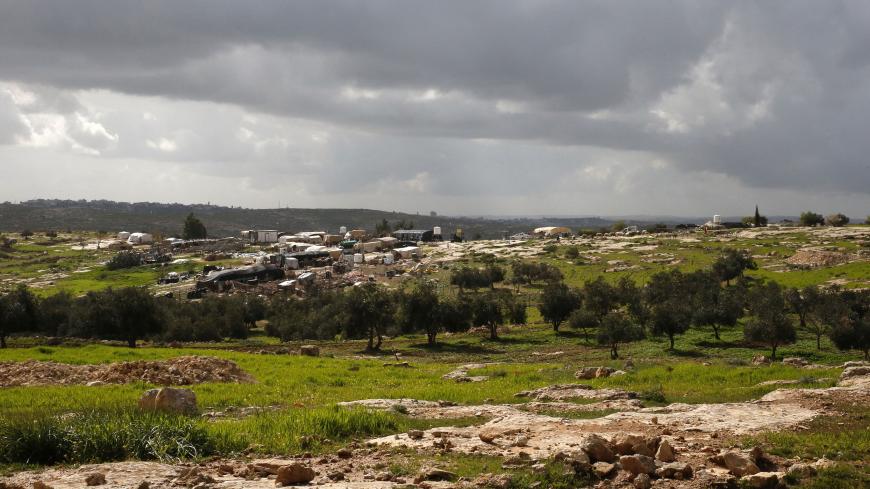 A picture shows a view of the mobile and temporary dwellings of Palestinian families living near the Israeli settlement of Susya, which have been warned to evacuate due to being in Area C in the occupied West Bank, Feb. 27, 2018. - HAZEM BADER/AFP via Getty Images

GAZA CITY, Gaza Strip — The Palestinian government and the French Development Agency (AFD), a representative of the French government, signed two agreements worth 20 million euros (about $22 million) to support agricultural development and the water sector in Palestinian communities in the portion of the West Bank under Israeli civil and security control, known as Area C.

After the agreements were signed Dec. 5 in Prime Minister Mohammed Shtayyeh’s office in Ramallah, he said, “France's support for a number of communities and villages in Area C is at the heart of the government's work strategy aimed at stabilizing these areas as an integral part of the Palestinian territories,” the Palestinian official news agency Wafa reported.

The first agreement provides 10 million euros to support infrastructure and road construction in 19 Palestinian communities in Area C of Salfit in the central West Bank, and Tubas and al-Jiftlik in the northern West Bank. The other agreement aims to develop water networks in the Aboud area and the villages in western Ramallah governorate, with a value of 10 million euros, to be followed by an additional 12 million euros from the EU, which is separate from the two agreements with France, Shtayyeh explained.

Shtayyeh had announced during a government meeting in Ramallah on July 22 that he would no longer recognize these classifications, which means he will not distinguish between the West Bank areas, in response to Israel's earlier demolition of Palestinian homes in areas under the PA’s control in East Jerusalem.

Walid Assaf, head of the PLO Colonization and Wall Resistance Commission, told Al-Monitor, “The purpose of these agreements is to consolidate the Palestinian presence in Area C and prevent Israel from annexing it, as it is an integral part of the Palestinian state based on the 1967 borders.”

Israel has expressed intent to annex large parts of Area C, especially the northern Jordan Valley. Settlement construction in this area is ongoing, while most Palestinian requests to build in this area are rejected. According to data published by Wafa in August, the Palestinians submitted 5,475 applications for building permits to Israel from the beginning of 2000 until mid-2016, of which only 226 were approved, i.e., no more than 4% of requests.

He noted that Israel does not allow the Palestinian government to directly interfere in Area C. The government thus passes its development projects in these areas through Palestinian municipalities and village councils, as they are allowed to operate without permission from Israel, Assaf explained.

He explained that his town, which has an area of 27,000 dunums (6,671 acres) and a population of 4,000 people, faces many Israeli violations, the most important of which is settlements, since the town is surrounded by five Israeli settlements.

“The Israeli authorities demolished four houses in the town during the past year and distributed notices to demolish a dozen others because they were built without a permit,” Ghawanmeh added.

The village of Aboud is one of several villages located in western Ramallah, which will benefit from the second agreement to establish water networks. The area of Aboud was 16,000 dunums in the past, but the continuous settlement encroachment in Area C has led to a loss of 5,000 dunums.

The head of the village council of Aboud, Hanna Khoury, told Al-Monitor, “Today, the area of the village is 11,000 dunums, and the residential and cultivated area is only about 500 dunums, as this area suffers from water scarcity [since] water supply is interrupted for long hours during the day. The rest of Aboud remains untapped, as water has never reached.”

He added, “The second agreement, which provides for the construction of water pumps and networks in the villages in western Ramallah with funding from the French government, will allow the access of water from artesian wells to citizens' homes and agricultural lands, which means cultivating more land and providing job opportunities for thousands of workers and farmers.”

Khoury noted, “This project was supposed to be implemented with funding from the US government, but the agreement was never concluded due to the estrangement between the PA and the US administration," when President Donald Trump recognized Jerusalem as the capital of Israel in December 2017. "Today, France decided to fund this project in accordance with the recently signed agreement," he said.