Palestinians live in caves to preserve their land

The PLO has funded an operation to rehabilitate caves in Area C of the West Bank to allow Palestinian families to remain on their land that is threatened by settlement expansion. 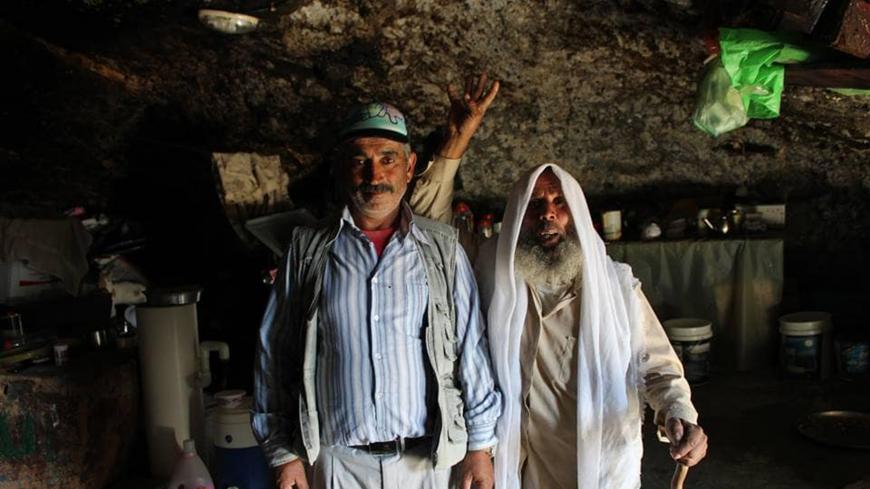 A resident of Ar-Rakeez area stands in his cave, which has been made suitable for living, West Bank. Posted Jan. 30, 2019. - Facebook/wallresistance

GAZA CITY, Gaza Strip — As part of efforts to preserve the Palestinian presence in the West Bank, the governor of Hebron in the southern West Bank, Jibril al-Bakri, inaugurated Feb. 6 five caves suitable for living in Ar-Rakeez area, east of the village of Yatta, located in Israeli-controlled Area C as per the 1993 Oslo Accord.

Dozens of caves are spread throughout Area C of the West Bank, which hundreds of Palestinians have equipped and used as alternative housing for the past years in light of Israel’s policies. Palestinians who have faced displacement due to Israel banning construction in Area C and considering Palestinian homes illegal, claiming they are located within a military zone, have found refuge in these caves.

Between 2006 and the end of 2018, the Israeli authorities demolished at least 1,401 Palestinian homes in the West Bank, excluding East Jerusalem, resulting in the displacement of at least 6,207 Palestinians, including around 3,134 children, according to B’Tselem. These families either move into caves or head to PA-controlled areas.

This is the first time that an official Palestinian body rehabilitates and inaugurates caves suitable for living. Five caves have been renovated with funding by the Colonization and Wall Resistance Commission (CWRC) affiliated with the PLO, which provides care and logistical support for the popular resistance against settlement activity and the wall. The PLO is planning to work on more caves, as they are not considered housing units and Israel cannot ban them.

CWRC head Walid Assaf told Al-Monitor, “Renovating these caves so they can accommodate families is part of a new strategy adopted by the PLO and the Palestinian Authority [PA] with the aim of strengthening the Palestinian presence in Area C, in light of Israel's prevention of Palestinian construction in these areas.”

The CWRC does not put these caves up for sale and lets Palestinians facing displacement in Area C move there at no cost in order to maintain their presence.

Assaf said, “The main conflict between us and Israel revolves around Area C that covers about 60% of the West Bank, where some 400,000 Palestinians live. Israel plans to displace Palestinians and annex the area [to its territories].”

He added that the CWRC has reconstructed the walls of the caves from the inside by filling gaps with cement so snakes cannot hide in them. Each cave has a bathroom and kitchen and a gate at the entrance in order to protect those inside. However, he noted, Israel refuses to connect these caves to the Palestinian electricity grid.

In the Mofkera area, east of Yatta, many families have been living in caves that they had reconstructed themselves years ago, since Israel prevented them from building homes on their land.

Umm Bajas Hamamda, who lives with her family in one of the caves in Mofkera, told Al-Monitor, “The occupation demolished our house in 2002 under the pretext of building without a permit, even though [our family] had been living on our property for generations. We tried to obtain a permit to build again, but the occupation refused to grant us one claiming [our land] was part of a closed military zone.”

The Hamamda family lives a primitive life inside the cave without electricity or running water; they rely on a nearby well for water and use wood to keep warm.

Assaf said that the CWRC’s next step is to support the Palestinian presence in Area C by supplying solar energy and water reservoirs to all the inhabited caves and by opening new caves for families threatened by displacement.

There are no statistics on the number of caves — empty or inhabited — that are spread in the mountainous areas of the West Bank.

The head of the village council in Yatta, Nidal Abu Aram, told Al-Monitor that Yatta, in addition to 19 Bedouin communities in the south of Hebron governorate, are surrounded by settlements — notably Beit Yater, Susya and Maon — all of which constitute a demographic barrier between these communities and their natural extension in area.

Abu Aram pointed out that the Palestinians living in caves “are committed to living there for future generations in order to preserve their land from being taken over by settlers or the Israeli authorities.”

Abdel Raouf Salah and his wife and five children have been living in a 110-dunam (27-acre) cave in the northern West Bank town of Abu Adam, west of Salfit, for the past seven years in order to preserve the land he inherited from his grandparents.

Salah used to live with his family in a small house his father had built on their land before Israel occupied the West Bank in 1967. When the house needed essential repairs, the Israeli authorities did not grant a permit for the renovation works.

“The Israeli authorities prevent me from building anything on my land, claiming that it is within a closed military zone, while settlers are allowed to build in the same area without any obstacles,” Salah told Al-Monitor. He said that this policy has forced some 250 Palestinians living in this area to move to PA-controlled areas.

Salah noted that 1½ years ago, a settler broker made him a tempting offer to buy his land for any amount of money he wanted. He refused the offer, however. “I told the broker, 'Even if you give me gold for the dirt in my land, I would still refuse,'” he added.

Salah explained that his insistence on staying made him vulnerable to attacks by Israeli soldiers and settlers. Nine months ago, the Israeli army killed his donkey, which he had used to work the land. Meanwhile, the olive trees on his land are repeatedly set on fire by local settlers of the Prokhin and Barkan settlements.

“Four of my sons want to get married and build on our land, but Israel's policy is preventing them from realizing their dreams. But it doesn’t matter; we are determined to stay in our land and we will not leave,” Salah concluded.