Dozens of Palestinians are living in caves in Hebron as the Israeli authorities repeatedly demolish their homes built without impossible-to-obtain permits. 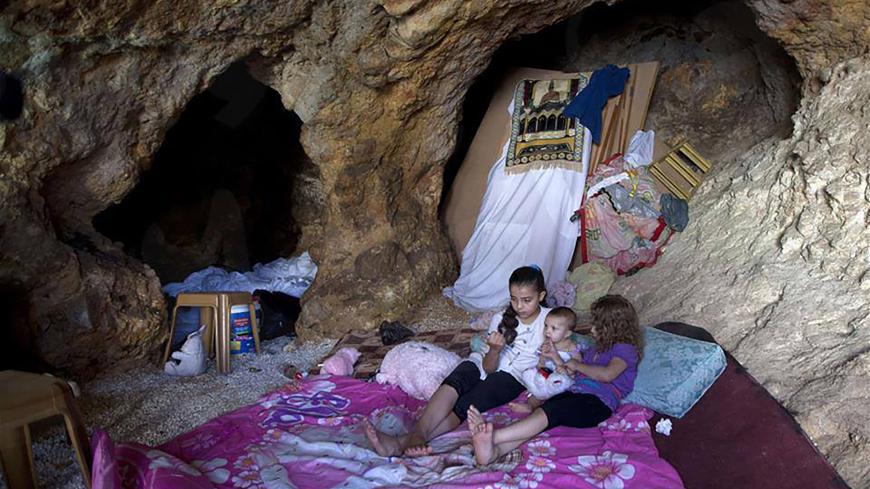 Palestinian children sit in the cave where they live outside of the city of Hebron, in the West Bank, July 22, 2020. - Abdelhadi Hantach/Al-Monitor

HEBRON, West Bank — In the foothills of the rocky mountains of Hebron, Munther Abu Aram, 48, lives a primitive life inside a natural cave with his wife and four children. When the Israeli authorities demolished Abu Aram’s home, they were left with no choice but to live in a cave with no infrastructure, electricity, water or sanitation.

The small cave of some 150 square meters (500 square feet) is located in Khirbet Janba in the occupied West Bank. “Life inside the cave is very difficult, but we got used to it after the Israeli occupation bulldozers demolished my home in 2018, which was built out of bricks, cement and tinplate, because it was built without a license. It was rebuilt and demolished again in 2019,” Abu Aram told Al-Monitor.

According to a report by the Turkish Anadolu Agency in December 2019, about 19 Palestinian families — some 100 people — are living in the caves of southern Hebron, without access to electricity or water, schools or roads.

Israel forbids Palestinians from building in Area C and demolishes the houses they do put up. According to a report by the Israeli human rights organization B'Tselem published Feb. 6, 2019, Israeli forces demolished 1,401 Palestinian homes in Area C, resulting in the displacement of 6,207 Palestinians, including 3,134 children under the age of 16, between 2006 and 2018.

On Jan. 15, 1997, the Palestine Liberation Organization and Israel signed the Hebron Agreement, also known as the Hebron Protocol, which calls for dividing the city into two sectors: H1 with 80% of the city’s area is subject to Palestinian security and administrative control. H2, the remaining 20% of the city, mainly consists of the central Old City and is under Israeli security control. Its population is an estimated 40,000 people.

Abu Aram said, “The Israeli occupation wants to displace us from Khirbet Janba, to confiscate land and turn it into closed military areas and to expand the settlement of Kiryat Arba and the outposts surrounding it.” He added that the Israeli authorities refuse to provide Khirbet Janba with electricity and water and have removed and destroyed utility poles and water networks several times.

Abu Aram and his family farm crops and raise livestock, and he uses a donkey cart to travel to neighboring towns to buy drinking water and other supplies, as well as to transport his children to their schools in a neighboring village dozens of kilometers away.

He uses fuel lanterns to light the cave and his wife prepares food over a fire. During summer, the family sleeps outside for fear of the snakes and scorpions that often make caves their homes.

Khalil Jabreen, 41, also lives with his family in a cave of 250 square meters (820 square feet) near the site of his demolished house in Khirbet al-Fakhit, destroyed by the Israeli authorities in 2000 and twice more in 2015 and 2018.

Jabreen’s family of six has been living in the cave since his house was first demolished in 2000 for having been built without a permit. He told Al-Monitor that every time he would rebuild his home, the Israeli army would demolish it."

“The Israeli forces are constantly evicting us from the area, but we reject all attempts at displacement and we want to keep our land from being stolen from us for them to build new outposts,” he said.

He explained that settlers constantly attack him and his children, while the Israeli forces keep erecting pop-up military checkpoints at the entrances of Khirbet al-Fakhit to prevent them from bringing in food, water and other needs.

Jabreen added, “The area where we live lacks schools, health centers and clinics, and whenever there is an emergency, I am forced to take a long, dangerous journey on a donkey cart to make it to a hospital or so my children can attend school.”

Abdel Hadi Hantash, a member of the General Committee for the Defense of Palestinian Land in the West Bank, told Al-Monitor, “Hebron governorate in the southern West Bank includes 27 Israeli settlements and 32 outposts.” He noted that Israel aims to Judaize Hebron and annex the Old City to the settlement of Kiryat Arba, which the Israeli government granted municipal status.

He continued, “The Israelis consider Hebron a religious city,” pointing out that settlers in this area are particularly characterized by religious fanaticism and political extremism.

Hantash noted, “There are two types of settlement in Hebron. The first is declared by the Israeli government and outlined by the council of settlements in the West Bank, which submits its plans through political channels so they can be legitimized and tenders can be offered for their construction. However, there is also unofficial settlement expansion carried out through Zionist organizations and influential figures in the Israeli government.”

He added, “The Israeli authorities issued over 16 demolition orders in the Masafer Yatta area in Hebron, confiscated 250,000 dunums and declared them closed military areas. Palestinians are not permitted to live or build in them, and the [Israeli forces] constantly try to coerce them into leaving their lands.”

Hantash called on the Palestinian official authorities to build infrastructure in the areas threatened with confiscation and seizure. "They ought to appeal to the International Criminal Court (ICC), which the occupation fears since it can issue arrest warrants for its leaders who commit war crimes and confiscate land, and compel the ICC to issue decisions that do justice to the Palestinians and strengthen their resilience.”