Some 30 families in Khirbet al-Aida in Hebron have received notices that their houses will be demolished and their lands expropriated to expand Israeli settlements. 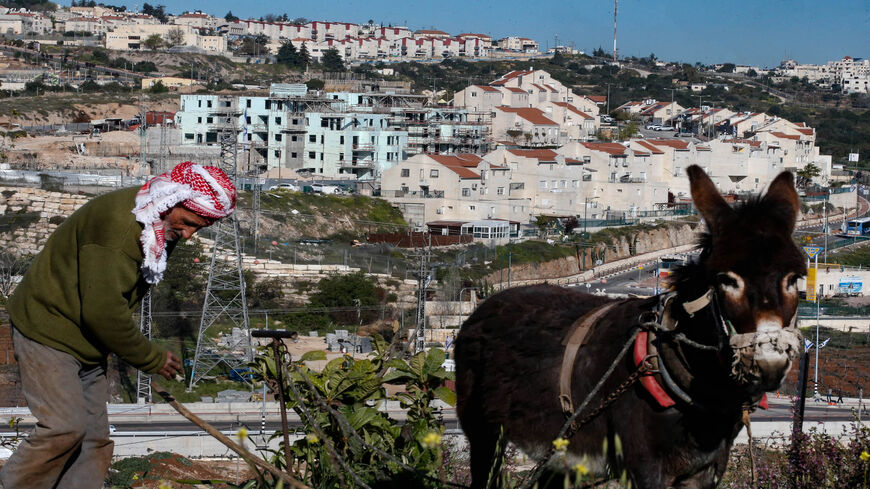 Samer Jaber recalls the place where he lives in Khirbet al-Aida — previously known as Khellat al-Aida — for its beauty and fertile land, and describes it as an oasis in the middle of Hebron, in the southern West Bank. Thanks to its fertile land, its inhabitants grow all sorts of trees, from almonds to grapes and citrus fruits.

He said, “Settlement activities around the area not only threaten us, but also the trees and buildings.”

Jaber, 43, was born after the rise of settlements in the area, which began in 1968, when the Kiryat Arba settlement was built. Jaber spent his childhood years watching as the settlement expanded into his land and the land of his ancestors, and witnessed the establishment of other settlement outposts around the area.

Khellat al-Aida, known as Khirbet al-Aida, is part of Hebron city and is located in Jabal Jawhar, which is threatened with expropriation in favor of settlements that are incessantly swallowing its lands. Khellat al-Aida lands cover only 350 dunams (86 acres), but they are among the most fertile agricultural lands in the area, not to mention their elevated strategic location at the foothill.

Because of its location and proximity to Kiryat Arba settlement, the area has been stricken by demolition and settlement pursuits for years, in an attempt to displace its residents and control it to implement the settlement expansion scheme on its lands.

Jaber told Al-Monitor, “Today we are experiencing an unprecedented state of restrictions and threats of expulsion. The settlers are attacking us in our homes, and the Israeli forces have been giving instructions to demolish our homes and confiscate our lands.”

Jaber said he bought land in the area in 2016 from one of his relatives who lives in Amman, and two years later, he submitted an application for a building permit to the Israeli Civil Administration, since the entire area is under Israeli control. He was surprised that his request was rejected on the grounds that it is a state-owned land.

Jaber then resorted to the Israeli courts to appeal the decision and tried to provide all the evidence that proves his ownership.

This is not the first time Israel obstructs Jaber’s attempts to build on his land. In 2015, he established an agricultural land for his family, by building agricultural sheds and a fence around them, but Israeli bulldozers completely demolished them.

All the residents in the area are in the same position as Jaber. On May 28, Karama Abdel Wahab Jaber received a notice to stop building his house in Khirbet al-Aida.

Before Karama moved in, settlers from the nearby settlement of Kiryat Arba seized it, stormed it and stayed overnight. He was able to reclaim it after the area’s inhabitants gathered and the settlers were expelled from it.

These attacks are not limited to property only, but also affect the lives of the residents who suffer under the continuous attacks of settlers, especially schoolchildren on their way to and from school, which is 3 kilometers (2 miles) from the residential area in Khirbet al-Aida. The parents thus prefer to send their children to school in groups.

Despite all these difficulties, people aren’t considering leaving their homes and lands; they do not have any other land. Jaber said, “Everything that has been happening around us — especially during the past two years — points to a plan to displace us. But our only option is to stay on our land or die on it.”

However, Jaber noted, "[Survival] requires legal and service support from official authorities to strengthen people’s resilience on the one hand, and to ensure that they are not alone in the face of demolition on the other.”

Hebron Mayor Tayseer Abu Sneineh said the municipality, with which Khirbet al-Aida is affiliated, is trying to interfere in the area and other areas threatened with confiscation by providing services on the ground despite Israel’s refusal to grant them the necessary licenses.

Abu Sneineh told Al-Monitor that the municipality built a road from Khirbet al-Aida connecting it to the heart of the city of Hebron. The work teams were working on it in stages and at certain hours, so that the Israeli forces would not intercept them and stop them. He added, “It is a modest step, but this is what we can do in light of the Israeli [construction] ban under the pretext that it is an area under their complete control.”

Abdul Hadi Hantash, a Hebron municipality official in charge of the settlement file, told Al-Monitor that official support must be provided to help citizens persist under these circumstances, by exempting them from electricity and water fees and developing agricultural projects.

Hantash said Khirbet al-Aida is inhabited by 30 Palestinian families, with a total of roughly 300 people. They previously depended on agriculture before turning to work in construction and other sectors due to Israeli restrictions.

He added, “The expansion toward the area's lands began 12 years ago, through plans to link the settlement of Kharsina and Kiryat Arba, and it recently increased, as part of the annexation operations in the West Bank.”

According to Hantash, Palestinians who try to expand construction in the area are pursued by the Israeli forces with demolition notices, under the pretext that they are lands owned by the state of Israel, although all of them are registered in the names of their owners in the Ottoman title deeds.