Why Israeli NGOs are shifting tactics to stop village demolition

The international community is doubling its pressure on Israel to not demolish the Palestinian village of Khirbet Susya and evacuate all of its residents. 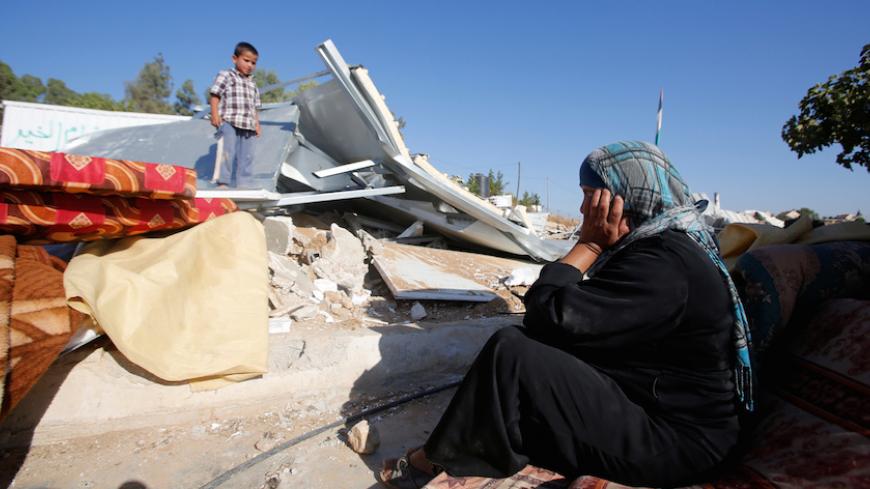 On Aug. 13, Israeli and international human rights organizations will hold another round of protest activities in the Khirbet Susya village in the West Bank in the South Hebron Hills. The activists, who view the Susya campaign as their life work, have recently learned that their protests have borne fruit: The US administration, as well as the European Union and Britain, warned Israel not to demolish the village and expel its residents.

The Palestinian village of Khirbet Susya has been in the South Hebron Hills since the 19th century. The Israeli Susya settlement was erected near the village in 1983 on Palestinian lands that were confiscated by Israel as state lands. Human rights activists claim that ever since then, Israeli authorities, pressured by the settlers, have been trying to drive out the Palestinian villagers from their lands. In 1986, the area was declared an archaeological site, and so the Khirbet Susya villagers were expelled from their lands, moving into caves and tents they erected on agricultural lands that they owned. Since then, Israel has been waging a battle against Khirbet Susya residents, claiming that they have constructed illegal buildings and taken over lands that do not belong to them.

In July 2000, after Palestinian terrorists murdered Yair Har Sinai, a resident of the Susya settlement next to the Palestinian village, the Israel Defense Forces (IDF) began destroying buildings in the village and banished some of the residents. This was in retaliation of the murder, which was not committed by the villagers. The court issued an interim order that halted the demolition work, but the threat remained. Additional attempts were made over the years to destroy structures in the village and expel its inhabitants. Recently, the civil administration issued demolition orders for most of the village’s structures.

However, it seems that the international strategy adopted by human rights activists might accomplish what dozens of demonstrations and petitions to the High Court of Justice couldn’t: the removal of the demolition threat for good. On Aug. 10, US State Department spokeswoman Elizabeth Trudeau said, “If the Israeli government proceeds with demolitions in Susya, it would be very troubling.” She added that the US administration hopes that a solution will be found to avoid the demolition.

The hint and the threat were clear. Her words came as a continuation of the firm message that was also transmitted by other higher-ups in the US administration and by congressmen. They all warned that should Israel destroy the Palestinian village homes, a severe US response would follow. The EU also transmitted sharp messages to Prime Minister Benjamin Netanyahu's office, and high-level British Foreign Ministry officials warned that the demolition of the village would make it difficult for London to continue to assist Israel in international forums.

Rabbi Arik Ascherman, who left the Rabbis for Human Rights organization this week but had spearheaded the Susya protest for many years, told Al-Monitor that there is a dispute among the organizations: whether to keep the protest local or whether to mobilize international public opinion to put pressure on Israel.

“I am a fan of the second approach,” he said, and added that while the first step must encompass efforts to change things from within, once this stage has been exhausted and efforts have failed, it is imperative to continue further. “With all due respect to efforts of the human rights legalists and a battery of legal advisers from all the other organizations, there is no doubt that the reason that Susya is still standing today is international pressure, headed by the United States,” Ascherman said.

The more that the Israeli organizations became disillusioned with the performance of the local authorities and the judgments of the courts, the more they looked outside for help. Thus, they formed contacts with sources that could put pressure on Israel to lead to positive results (in their view).

Two substantive issues regarding Susya were brought to the courts in recent years. The first is whether the village inhabitants are living on land they owned for generations, as they claim, or whether they took control of land over which they have no right of possession. The second issue is why the state is not creating master building plans that will allow the inhabitants to continue to live in their village.

On Aug. 1, the High Court of Justice held another discussion, headed by Supreme Court President Justice Miriam Naor, on the state petition to demolish Palestinian Susya. At the end of the discussion, the justices gave Defense Minister Avigdor Liberman two weeks in which to submit his position regarding the evacuation of Susya and negotiation with its inhabitants. But even before the defense minister could submit his answer, Israel found itself in the crosshairs of an international protest movement that put Liberman in a bind.

Professor David Shulman, an Israel Prize laureate and activist in the Israeli-Palestinian peace movement Taayush, has been a partner in the Susya struggle since its inception in 2000. In an interview with Al-Monitor, he said that the long battle constitutes a test case. At the very beginning of Taayush’s activities in South Hebron Hills, infrastructure for Palestinian inhabitants was erected with the assistance of international organizations and foreign governments that financed them. Over the years, organizational activists brought ambassadors and attaches from the United States and European embassies to the area. At first, this was to encourage the diplomats to help the Hebron Hills residents, and afterward, to enable them to see firsthand the hardships of the Palestinian residents who, Shulman said, are slated for evacuation.

“Today, they are very familiar with Susya,” said Shulman. “Susya is a unique instance in which there is an attempt to demolish an entire village. That is why it enraged the entire world. The [Israeli] courts disappointed us, especially the High Court of Justice that refused to intervene. Evidently there’s no chance to attain a fair trial, certainly not in the military system in the territories. The only thing that deters Israeli governments is international pressure.”

Ascherman also thinks that international mobilization against Israel regarding Susya stems from the fact that over the last year Israel has significantly intensified the scope of demolitions in Area C. According to a B’Tselem press release, Israel has destroyed at least 188 residential structures in Area C that were under Palestinian ownership. According to B'Tselem, this is the largest number of structures destroyed by Israel in the West Bank since 2006.

Human rights organizational activists in Israel believe that the “demolition momentum” in Area C can only be stopped via international pressure, as shown in the Susya instance. In their opinion, the Susya affair clearly showed the defense minister and the IDF that “not everything goes” and that the international community is setting red lines that Israel must not cross.