Israeli Prime Minister Benjamin Netanyahu has remained silent about plans to destroy the West Bank village of Susiya despite calls by the United States and the European Union to rescind the demolition orders. 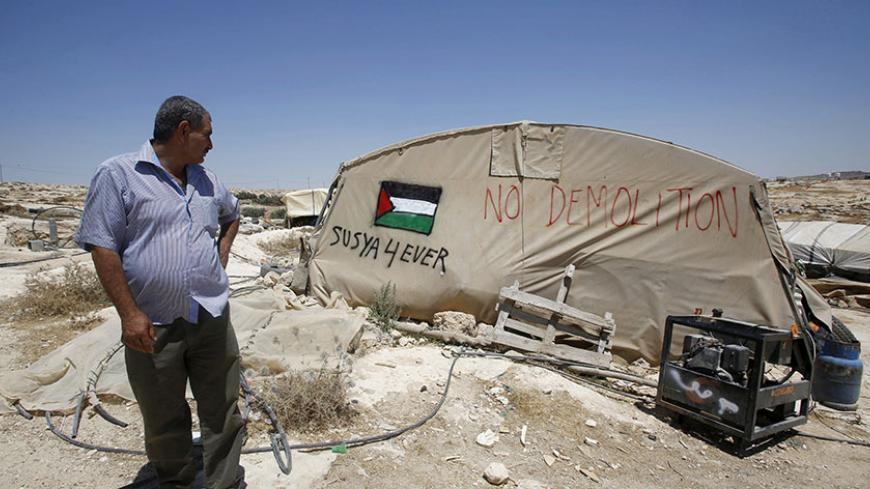 A Palestinian man, Jihad Nuwaja, stands next to a tent in Susiya village, south of the West Bank city of Hebron, July 20, 2015. - REUTERS/Mussa Qawasma

The timing of the announcement by US State Department spokesman John Kirby regarding the Barack Obama administration’s position on the small Palestinian village of Susiya was no less important than its content. Kirby made the statement July 16, as the administration was going out of its way to douse the flames in US-Israeli relations following the signing of the nuclear agreement with Iran.

While world opinion speculated about the effect of the Iran agreement on US-Israeli relations, Kirby arrived for his briefing armed with a stern declaration about the potentially far-reaching implications of the planned demolitions in Susiya in the Judean Mountains south of Hebron.

Kirby made clear that the consequences of Israel’s harassment of Susiya residents would extend beyond the demolitions’ impact on the villagers and their families. He noted that the planned expulsions and land appropriations in Susiya were particularly glaring given the settlement activity in that same region. Several hours beforehand, Dorothy Shea, acting US consul general in Jerusalem, had used similar language. She, too, urged Israeli authorities to abstain from demolishing the homes in the village. These sharp public pronouncements thus turned the Susiya affair into the first test of Israeli foreign relations in the post-Iran nuclear crisis era.

According to information acquired by human rights organizations in Israel and the territories, the Israeli civil administration did not wait until the end of the month of Ramadan to hand out demolition orders for 37 structures. It intends to carry out the orders before Aug. 3, the date set for the Supreme Court to hear an appeal submitted by the Palestinians and these organizations.

European capitals are also eyeing with concern the bulldozers parked outside the tiny village, whose residents have the dubious distinction of living in a region of the West Bank known as Area C. The Oslo Accord divided the West Bank into three zones — A, B and C — with Area C under complete Israeli control.

On June 29, the European Union’s ambassador to Israel, Lars Faaborg-Andersen, said the EU’s humanitarian affairs agency had reported that every month, Israel destroys five to seven projects that the union funds in Area C. “We’re talking about European taxpayer money,” the envoy said at a conference on Susiya held by the Van Leer Jerusalem Institute. The ambassador stressed that European aid does not free Israel of its responsibility under international humanitarian law to ensure a reasonable quality of life for the Palestinian population under its control. He noted that Area C constitutes some 60% of the West Bank and, therefore, is a key to the establishment of a future Palestinian state.

According to EU data, said Faaborg-Andersen, recent years have brought an increase in the number of demolitions in the region (in addition to extensive demolitions in Bedouin villages in Israel). He explained that this stems from the minute number of building permits Israel grants the residents of Palestinian villages throughout Area C.

“If people knew where they could build,” Faaborg-Andersen said, “it would prevent construction without permits and demolition orders.” He added that Yoav “Poli” Mordechai, coordinator of government activities in the territories, shares the view that the appropriate way to overcome the problem is to prepare an Israeli-Palestinian master plan that would enable the Palestinians to build in a legal and orderly manner.

“Unfortunately,” Faaborg-Andersen remarked, “the master plan process has been taken hostage by other events that have been going on between Israel and the Palestinians,” such as complaints against Israel lodged by the Palestinian leadership with international organizations. Like the American speakers, Faaborg-Andersen did not forget to mention that even as Palestinian homes are being destroyed, the settlements are taking over more and more land for construction and security needs.

One can assume that Prime Minister Benjamin Netanyahu is not keen to see footage of bulldozers destroying the homes of indigent Palestinians on television screens worldwide, bumping reports on the condition of human rights in Iran. Even if the prime minister could be persuaded that he should seek a way out of this affair, he could expect a fair number of obstacles along the way.

On the one hand, the international community is pressing him to stop the bulldozers. On the other, Netanyahu is being held hostage by the settlers and their representatives in the leadership of the Likud and HaBayit HaYehudi parties. They will not leave him alone until he wipes out the village stuck in the craw of the settlers of the south Hebron Hills. Yisrael Beitenu, the right-wing opposition party led by former Foreign Minister Avigdor Liberman, would have a field day were Netanyahu to surrender to the left.

This equation is missing an important element — the Israeli left-wing opposition. The Zionist Camp has once again left the Meretz Party to face the right alone. The silence of the main opposition party on the Susiya affair can be added to the absence of its members from the vote on force feeding hunger-striking Palestinian prisoners held on security-related offenses, its vote in favor of the nationality bill that tears apart Palestinian families, its support for thwarting peace activists’ Marianne flotilla to Gaza and its competition with Netanyahu to slam the Iran agreement.

This time as well, Meretz was the sole Zionist party to rush to the defense of the downtrodden. This time, too, a handful of Israeli peace activists — led by members of the organizations Ta’ayush (Living Together, in Arabic), B’Tselem and Rabbis for Human Rights — are standing by the weakest group among the occupied Palestinian population. A chosen few among them, like professor David Shulman, serve as voices delivering the shepherds’ and farmers’ messages to air-conditioned administrative offices in Washington and at European Union headquarters in Brussels.

In his book “Dark Hope: Journal of a Ta’ayush Activist,” Shulman, a member of the Israeli Academy of Sciences and recipient of the prestigious Emet Prize, writes about how he and his friends collected poison pellets that the settlers had scattered to kill the Palestinian residents’ goats and sheep, planted olive trees to replace the ones uprooted by settlers, helped a farmer cross the few yards to his well and provided blankets for uprooted Palestinian cave dwellers.

“Two relentless national movements are engaged in a conflict, street to street, house to house,” Shulman wrote. “One side is infinitely stronger than the other, but not more magnanimous. It abuses its power over and over — the tremendous machine of a state and army and judiciary — in order to disown, threaten, expropriate, control, destroy.”

The well-oiled mechanism of the major powers proved in reaching an agreement with Iran in Vienna on July 14 that it can use its power to achieve compromise, to bridge, to rehabilitate and to build. Now this mechanism is free to focus on dismantling the ticking time bomb on the heights of the Hebron Hills.