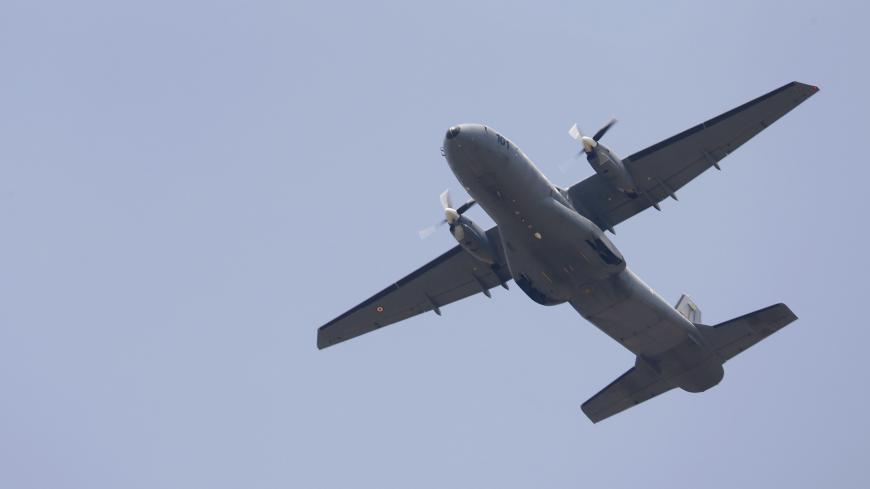 A Turkish Air Force C-160D Transall transport aircraft takes off from Incirlik air base in Adana, July 26, 2015. Turkey has made a dramatic turnaround by launching air raids against both the Islamic State (IS) and the Kurdistan Workers Party and by allowing the United States to use Turkish air bases to fight IS. - REUTERS/Murad Sezer

When this column reported in October that we might be witnessing Turkish President Recep Tayyip Erdogan’s “slow turnaround on foreign fighters in Syria,” we did not anticipate it would be this slow.

Erdogan has faced pressure and criticism for holding back in the battle against the Islamic State (IS) and for Turkey’s at best episodic approach to dealing with foreign jihadi fighters transiting Turkey en route to Syria.

On July 24, four days after a suicide bombing carried out by a Turkish recruit of IS in Suruc killed more than 30 Turkish citizens and injured over 100, Turkey launched its first ground and air combat operations against IS in Syria and approved US use of air bases at Incirlik and Diyarbakir for strikes against IS within Syria.

Metin Gurcan, making reference to Turkey's Justice and Development Party (AKP), the Kurdistan Workers Party (PKK) and the pro-Kurdish Peoples' Democratic Party (HDP) writes that Turks in general are fed up with their government’s Syria policy and ready to let the government know: “Neither AKP elites nor the PKK nor the HDP intends to denounce the Suruc attack and search for new beginnings together. Both want to capitalize on the ramifications of the massacre for their own political ends. There is also a perceptible split between the elites and the street after the attack. Anger accumulated by radical Kurdish and leftist groups is already visible in the streets and is likely to be turned against the AKP decision-makers and the state next. Worried about massive street protests, the AKP government has instructed security forces to maintain law and order without tolerance.”

The July 20 terrorist attack may have been the final straw for the AKP to step up its actions against IS, as well as an opportunity to escalate its campaign against the PKK, which is linked to the Syrian Democratic Union Party (PYD). Erdogan considers both the PKK and PYD to be terrorist organizations. The crackdown by Turkish security forces on IS cells inside Turkey has also targeted some leftist and Kurdish groups.

Turkey’s military operations against IS in Syria have coincided with attacks against PKK bases in northern Iraq, breaking a fragile cease-fire that has been in force between the Turkish government and the PKK since 2013. Although the United States also considers the PKK a terrorist organization, the US military has worked effectively with PYD armed groups to battle IS in Syria.

Al-Monitor’s Turkey Pulse and this column have reported on the priority Erdogan has given to thwarting gains by Kurdish forces in Syria. Fehim Tastekin reports from Turkey that “Ankara may feel it is now the right time to move forward with its efforts to foil the Kurds' designs on expanding their turf from Tell Abyad to Afrin, and to implement a safe-zone project controlled by Turkey-supported Syrian opposition forces. However, the government, which has been massing troops on the border, is entangled in efforts to form a new government. The CHP, which could be a coalition partner with the AKP, is warning the government against actions such as marching into Syria. One must remember, however, that a Turkey rattled by IS attacks may now be more amenable to far-fetched and risky government plans.”

In a July 24 news briefing, US Department of State spokesman Mark Toner did not rule out a long-standing demand for a buffer zone in northern Syria, saying, “We continue to have discussions with Turkey, evaluate options for the best way to counter [IS] along its border. We’ve spoken from this podium and elsewhere about some of the logistical challenges that would be inherent in a buffer zone, but we obviously take threats to Turkey’s border seriously. They are a NATO ally. So we’re looking at options.”

“Friends can disagree,” said US Secretary of Defense Ash Carter on July 21 shortly after visiting with Israel’s Prime Minister Benjamin Netanyahu in Israel.

The visit, widely seen as an attempt to reassure Netanyahu about the Joint Comprehensive Plan of Action (JCPOA), signed between Iran and the P5+1 powers (five permanent members of the UN Security Council plus Germany) July 14, did not stop the prime minister from sharing what one senior US defense official described as Netanyahu's “clear and blunt” views.

Netanyahu now stands alone among US allies in rejecting the deal, as Saudi Foreign Minister Adel Jubeir said July 23 that the kingdom “welcomes any agreement that would guarantee Iran's inability to obtain a nuclear weapon, and that contains an effective inspection mechanism, through which all sites would be inspected, including the military sites, as well as a mechanism to reinstate sanctions against Iran in the event that it violates such an agreement."

While Jubeir’s careful statement masks well-documented Saudi anxieties about the JCPOA, it nonetheless signals that Riyadh will not actively seek to undermine the agreement.

In Israel, Netanyahu’s steadfast commitment to try to derail the agreement may be overshadowing those who see benefits from the agreement’s constraints on Iran’s nuclear program and an opportunity to deepen US-Israel security cooperation, as this column reported last week.

In his testimony before the Senate Foreign Relations Committee on July 23, Secretary of State John Kerry referred to statements from former Israeli security establishment figures including Efraim Halevy, the former director of Mossad, who wrote that the deal “includes components that are crucial for Israel's security.”

Ben Caspit writes that despite the promise of increased security cooperation between Israel and the United States, Netanyahu is holding to his position. “So far, Netanyahu has not allowed Israel’s security forces to enter into a dialogue with the Americans over an attractive compensation deal and vital strategic coordination package for the day after the agreement. He is paying a steep price for his ideology.”

Mazal Mualem reports that Netanyahu has been able to maintain a national state of panic, effectively drowning out competing voices, some of them very senior, who have expressed openness to the deal.

“Two of the dissenting opinions are expressed by Isaac Ben-Israel — a reserve general, professor, chairman of the Israeli Space Agency and recipient of the Israel Defense Prize — and professor Ariel Levite, former deputy director general of the Israeli Atomic Energy Commission. These two experts wrote articles in which they presented the positive aspects of the agreement from Israel’s perspective. But their chances of garnering appropriate public attention were nil given the apocalyptic rage prophecies of the politicians.”

Mualem also writes that while former Deputy Defense Minister Ephraim Sneh was not pleased with the terms of the deal, he was particularly piqued at what he saw as a missed opportunity for Netanyahu to swing a grand bargain: “If Bibi [Netanyahu] seriously believed what he was saying, that Iran is Israel’s main enemy and that it poses an existential threat, he should have paid the price by reaching an agreement with the Palestinians. That would be the kind of deal made by an Israeli foreign policy that is not held prisoner by the settlements.”

As it is, Israel is facing a backlash over plans to demolish the village of Khirbet Susiya in the West Bank, even as the country’s leadership tries to focus international attention on the Iran deal.

Shlomi Eldar writes that the residents of the small village may have again gotten the attention of Israel’s powerful ally: “Already in 1986, in a bid to dissuade Israel from uprooting them from their land, the residents of Khirbet Susiya turned to the US ambassador to Israel, Thomas Pickering, asking that he intervene on their behalf. Pickering, they say, pledged to assist them, but two weeks later the area where they had been living was fenced off with barbed wire. Now they have approached the US Embassy once again, asking that it pressure Israel not to demolish the village. It appears that their efforts have not been unsuccessful.”

Akiva Eldar explains that the timing could prove complicated for Netanyahu: “Prime Minister Benjamin Netanyahu is not keen to see footage of bulldozers destroying the homes of indigent Palestinians on television screens worldwide, bumping reports on the condition of human rights in Iran. Even if the prime minister could be persuaded that he should seek a way out of this affair, he could expect a fair number of obstacles along the way.

"On the one hand, the international community is pressing him to stop the bulldozers. On the other, Netanyahu is being held hostage by the settlers and their representatives in the leadership of the Likud and HaBayit HaYehudi parties. They will not leave him alone until he wipes out the village stuck in the craw of the settlers of the south Hebron Hills. Yisrael Beitenu, the right-wing opposition party led by former Foreign Minister Avigdor Liberman, would have a field day were Netanyahu to surrender to the left.

"This equation is missing an important element — the Israeli left-wing opposition. The Zionist Camp has once again left the Meretz Party to face the right alone. The silence of the main opposition party on the Susiya affair can be added to the absence of its members from the vote on force feeding hunger-striking Palestinian prisoners held on security-related offenses, its vote in favor of the nationality bill that tears apart Palestinian families, its support for thwarting peace activists’ Marianne flotilla to Gaza and its competition with Netanyahu to slam the Iran agreement.”

Netanyahu’s decision on Susiya comes as he faces criticism for his policies on Palestinian prisoner releases.

Shlomi Eldar writes that a program to release prisoners outside of the West Bank, and particularly to Gaza, has backfired after recent terror attacks: “The bottom line is that Israel’s working premise — according to which ‘heavyweight’ prisoners are to be expelled to the Gaza Strip upon their release — has been proven to be wrong. Keeping them at a distance doesn’t keep them away from terror.”

In fact, Eldar writes, “Deporting the heavyweight prisoners to Gaza has another substantial drawback. In Gaza, they are far away from the watchful eyes of the Palestinian security forces as well as the Shin Bet. More than likely, if the West Bank headquarters had been set up in the West Bank, Israel and the Palestinian Authority — which have demonstrated effective cooperation in the past — would have nipped it in the bud.”