After 31 young Turks were killed and many more wounded by a suicide attack in Suruc, protests erupted across the country and politicians scrambled to point fingers. 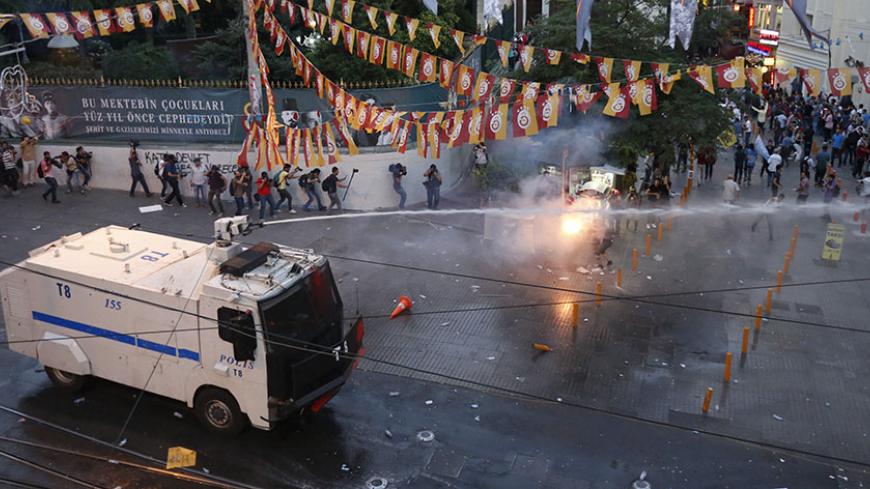 Riot police use water cannon as demonstrators throw fireworks during a protest in central Istanbul, July 20, 2015. Police in Istanbul fired teargas and water cannon when a demonstration by protesters blaming the government for a suspected Islamic State suicide bombing turned violent. - REUTERS/Murad Sezer

Sanliurfa, where the governor recently had three journalists detained for daring to ask whether Islamic State (IS) militants expelled from Tell Abyad had penetrated the province, was bloodied by a suicide attack July 20.

About 300 young people, mostly university students associated with the Federation of Socialist Youth Associations on their way to support the reconstruction of Kobani, were attacked during a press briefing in Suruc; 31 of them were killed and 104 were wounded, shaking Turkey to its foundations once again.

At a July 11 conference in Samandag-Hatay, three young people approached me and said, “We are members of the Socialist Youth. We are launching a campaign for the reconstruction of Kobani. Will you support us with a video message?” I agreed, and the video they taped was released over the Internet. In photographs taken July 20 before the massacre, I saw them in a mass breakfast at Suruc with the families of Kobani victims. They were happy. A couple of hours later, many of them were torn to bits in a massive explosion.

I didn’t know any of them, but now I do. They are the latest victims of a dirty war waged in Syria by militants moved around in ships, planes and buses in the name of changing the regime.

Film producer Omer Leventoglu, who was part of the team going to Kobani, told Al-Monitor, "We were on our way to Kobani with our medical, construction, educational and art teams. We left Istanbul in three buses. We sang and danced all the way. We were stopped at Suruc entrance and the police checked our identities.” Leventoglu listed what they had planned to do in Kobani: One group was to work in construction, and another to build a playground for children. They were going to create a child care center, organize a library and show documentary movies.

When the local district governor refused to allow passage for more than 20 people to Kobani, parliamentarians intervened. The group was to cross the border the minute the permission was received.

The attack came at a press briefing the young people had organized at the Amara Cultural Center to explain their Kobani mobilization.

As protests erupted in many cities of the country over the massacre, harsh allegations came from political figures.

What made Davutoglu’s words so significant was that this was the first time government officials have pointed to IS without instinctively accusing the Syrian regime. Recall that the government had accused Syria of the double car bombing in May 2013 that killed 53 people at Reyhanli and the attack that killed three security officials at Nigde in March 2014.

The man suspected of setting off the bomb at the Diyarbakir rally of the Peoples’ Democratic Party (HDP) on June 5, killing four and wounding more than 100, was found to have once been on a police surveillance list but later taken off it.

The opposition Republican People's Party (CHP) and the HDP directly blamed the Justice and Development Party (AKP) government. Deputy CHP Chairman Veli Agbaba was blunt: “This incident is a result of the Syria policy of the AKP and the MIT [the National Intelligence Organization]. The MIT, which keeps tracks of its critics, did not see those who massacred 31 youngsters. The MIT chief and interior minister should resign.”

HDP Co-chairs Selahattin Demirtas and Figen Yuksekdag wrote in a statement, “The officials in Ankara who gently pat the heads of IS are the accomplices of this barbarism.” Yuksekdag added, “No force in Turkey can even move without the knowledge of MIT and other state intelligence units in the Sanliurfa-Suruc area. Don’t look far for the culprits of the massacre. Those who rule politics today are the responsible ones.”

Devlet Bahceli, the leader of the opposition Nationalist Action Party, chose to question the motives of the victims. He said, "The goals and methods of those who left Istanbul for Suruc with the excuse of Kobani were not pure and ethical.”

The disturbing remarks by Bahceli, who has based his election strategy and coalition bargaining on anti-Kurdish sentiment, are compatible with Turkey's reality and classical state mentality, which allows leftists to be killed with impunity.

The attack followed recent police operations against IS supporters, staged to rebut the accusations against the AKP government of supporting IS but widely interpreted as simply done for appearance' sake. Anti-IS measures became more visible after the recent Ankara visit by a US delegation led by retired Gen. John Allen. The parties were said to have agreed on stepping up anti-IS efforts.

The government is now trying to portray the Suruc attack as retaliation against Turkey for combating IS. The prime minister was asked during a news briefing, “Ten days ago, there was a wide-scale operation against IS in Turkey. Twenty-seven people were detained in four provinces. The Turkish military apprehended six IS members. Could this be retaliation?” Davutolgu seized the opportunity to reply, “You must convey your perceptive view to those who are accusing Turkey and its government. Yes, Turkey has always taken measures to prevent threats by [IS] and similar terror organizations. No doubt such measures are disturbing some.”

But the intelligence that IS was going to send a suicide bomber to Turkey was received long before the anti-IS operations of July 10. According to reports reaching Kilis police, IS had dispatched eight suicide bombers from Raqqa to Turkey. Two bombers, one of them female, both wired with explosive vests, reached an IS cell at Haci Veli village June 8. Six other bombers were dispatched July 15 to infiltrate Turkey.

The opposition is asking why appropriate security measures were not taken despite this intelligence.

One reason why the anti-IS operations were not taken seriously was that only one of the 21 people detained on suspicion of organizing the passage of militants to Iraq and Syria was arrested July 10.

That Turkey would be attacked if effective measures were taken to sever lS logistical connections was expected. But we had seen these kinds of threats and attacks at other times, when Turkey was doing nothing to disturb IS.

Given the increasing reactions by the local public and stepped up pressures from the international community, Ankara feels compelled to take more concrete steps. Radikal’s Murat Yetkin says that after this attack, Ankara will harden its stance against IS with tougher measures in the political, military and ideological realms.

Ankara may feel it is now the right time to move forward with its efforts to foil the Kurds' designs to expand their turf from Tell Abyad to Afrin, and to implement a safe-zone project controlled by Turkey-supported Syrian opposition forces. However, the government, which has been massing troops on the border, is entangled in efforts to form a new government. The CHP, which could be a coalition partner with the AKP, is warning the government against actions such as marching into Syria.

One must remember, however, that a Turkey rattled by IS attacks may now be more amenable to far-fetched and risky government plans.