A panic-stricken media generates public and financial insecurity in Turkey. 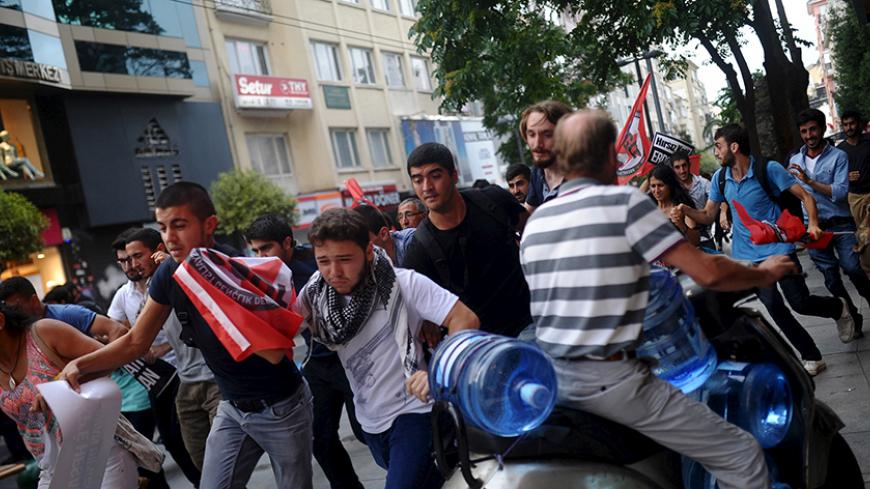 Demonstrators run away from riot police during protests against a deadly bomb attack in Suruc, in Istanbul, July 24, 2015. - REUTERS/Yagiz Karahan

On July 20, in the mainly Kurdish border town of Suruc, a suicide bomber claimed the lives of 32 and injured over 100 peace activists who wanted to contribute to the reconstruction of Kobani, the Kurdish town that survived the Islamic State (IS). The suicide bomber, Seyh Abdurrahman Alagoz, an ethnic Kurd and citizen of Turkey, was allegedly an IS member.

As mainstream media outlets blamed IS for the attacks, the outlawed Kurdistan Workers Party (PKK) executed two Turkish police officers in their homes on July 22. While the PKK assumed responsibility for the deaths of two policemen, so far no accomplices of the Suruc suicide bomber have been arrested. Several individuals who were protesting the bombing were taken into custody.

Allegations have come from the left-wing, pro-Kurdish Peoples' Democratic Party (HDP) and the Republican People's Party (CHP) that the Turkish government and National Intelligence Agency were behind the Suruc massacre. Meanwhile, access to several Kurdish media outlets such as Dicle Haber and Firat News has been blocked in Turkey. Internet service slowed on and off for several days at the end of July.

Since the Suruc massacre, 23 security personnel have reportedly been killed by the PKK. Incrementally, TV news is focusing solely on stories of those who were killed, kidnapped policemen, attacked government buildings and assets, along with bomb threats. Turkish audiences have not seen this many funerals since the early days of the conflict in the late 1980s. For decades, the governments have silenced the press from reporting on the funerals of terror victims — particularly if they are security officials — for various reasons, including showing the weakness of the Turkish state and highlighting the failures of military policies against the PKK terror. Hundreds of families have buried their sons quietly and grieved alone. Indeed, Turkey has seen the Veterans Agency under investigation, its chairman arrested and veterans struggling without government support. In one well-publicized case, as recently as November 2014, the government sought to reclaim the prosthetic leg of a veteran who could not pay for the operation. There was a time not many people wanted to hear the stories of those who were killed, of their loved ones left behind or of veterans’ post-war problems. Today, funerals are packed with the top echelon of the Turkish government, as Prime Minister Ahmet Davutoglu and other ministers are photographed holding the hands and drying the tears of victims’ families. The media gives the names of the fatalities, details their stories and elaborates on how they died fighting for their country.

At the same time, the financial news is not pleasant. Not only has the Turkish currency lost value against the US dollar and the euro, but tourism in Turkey has also reportedly suffered a significant loss.

Taking a break from the summer holiday, the Turkish parliament held an emergency meeting on July 29 while military operations to bomb the PKK at Qandil Mountains, and arrests of IS, Kurdish and leftist organizations' members all over the country dominated the news all day. It was only in August 2012 when the Justice and Development Party's (AKP) then-Deputy Prime Minister Huseyin Celik made the headlines about the death of Turkish soldiers, saying, “We cannot let the PKK determine the agenda of the Turkish parliament just because a few conscript soldiers are killed.”

Times have changed. Now, the CHP has called upon the emergency parliamentarian meeting mainly to open an investigation into the causes of increasing terror attacks all around the country. While the two left parties, the CHP and the HDP, voted for the investigation, the votes of two right-wing parties, the Nationalist Action Party (MHP) and the AKP, prevented the initiation of the investigation.

As tensions climbed, it was not just the death of policemen and soldiers that made the news, but also the funerals of the PKK members or sympathizers. The three-day standoff between police and Alevis in Gazi District — known for its leftist and Alevi population — made the news until the HDP brokered a deal with government officials on July 27. On Aug. 3, after days of negotiations, the bodies of 13 Kurdish fighters who lost their lives in Syria fighting against IS were finally allowed entry into Turkey, as their families wanted to bury them in their hometowns.

The reporting does not reveal any details about the individual stories of the Kurdish deaths. These events have been deepening the rift and tensions between Kurds, Alevis and the government beyond repair.

More than 90 news websites were blocked in Turkey on Aug. 3, including the rather mainstream Evrensel and Ozgur Gundem.

The only news sources available for the mass public nowadays are those approved by the government. These news outlets, TV and print, are overwhelmed with the mood of constant panic and fear. One significant change is the language of the news. The HDP, which was seen as the partner of the AKP during the peace process, is now discredited as the mouthpiece of the PKK. To top it all off, there are other militant and left-wing organizations making the news. One of them, the Marxist Leninist Communist Party (MLKP) — which has been considered an illegal organization in Turkey since 1994 — has particularly become the center of attention. The HDP chairwoman, Figen Yuksekdag, is specifically labeled in the pro-AKP press as a senior member of the MLKP, while several police rounded up members of the MLKP. In the midst of all of these intensified security measures, there is rather mind-boggling news. For example, on July 31, news broke that a young man was taken into custody on suspicion of being a member of the four leftist armed organizations.

In the immediate aftermath of the Suruc bombing, Turkey launched a double-tiered offensive against both the PKK and IS. However, domestically it is the battle against the HDP, leftist organizations and any sort of opposition — including the Gulen movement — in which the AKP government has truly engaged. It has been almost two months since the June 7 elections, and there is little to no progress regarding what kind of coalition government will be formed. Indeed, it is no secret that AKP elites, particularly Turkish President Recep Tayyip Erdogan, wish for early elections in November. The only possible way for the AKP to gain a majority of seats in parliament is if the HDP fails to pass the electoral threshold in the next round. That is why Demirtas said, “How many times does AKP need to lose for their loss to be seen as a loss?”

These fears and rumors were validated as news leaked on July 30 that Deputy Prime Minister Besir Atalay had sent a memo to AKP cadres, saying, “We have been successful in dividing the 60% opposition block; now prepare for early elections.”

Although Erdogan announced that he is against shutting down political parties, AKP members have sought to remove the immunity of HDP parliamentarians. To counter their efforts, the HDP volunteered to remove their own parliamentarian immunity and asked all other parties to follow suit, but only the left-wing CHP joined their plea. In the meantime, a senior HDP member told Al-Monitor, “They will not shut our party down; they will attempt to single out our leaders, tarnish their reputations and prevent the HDP from receiving funding from the government.” According to Turkish political parties’ legislation, all parties that acquire seats in parliament receive funding from the treasury in proportion of their vote share. The HDP was to achieve 27 million Turkish liras (about US $9.6 million); this is most likely to be blocked through the AKP’s efforts.

It is clear that the HDP’s image as not just pro-Kurdish but as a party representing all underrepresented groups in Turkey is being targeted. The HDP is now being branded as the party of “terrorists” by pro-AKP media. In major cities, people are worried about taking the metro and buses or visiting shopping malls and other crowded areas. “Where will the next bomb explode?” has become the regular topic for daily interactions in taxis, coffee shops or stores. Terror aims to change ordinary citizens’ way of life and thinking. The crux of the matter is: By November, will those who voted for the HDP still be loyal to their choice, or will the terror and propaganda effectively work to change their vote?