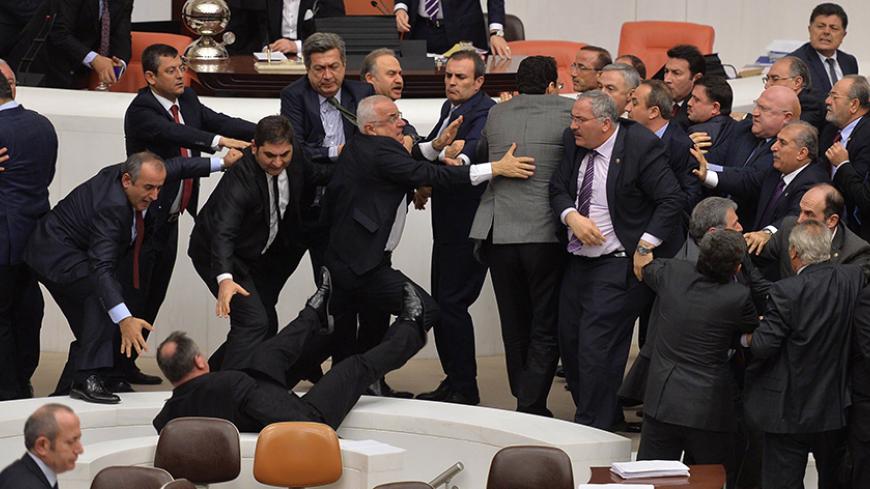 Lawmakers from the main opposition Republican People's Party and ruling Justice and Development Party scuffle during a debate on legislation to boost police powers, at the Turkish parliament in Ankara, Turkey, Feb. 19, 2015. - ADEM ALTAN/AFP/Getty Images

For the past 10 days, Turkey's parliament has been going through the painstaking, and literally painful, process of amending the constitution. If approved, the amendments will clip parliament’s power extensively while providing unchecked freedoms to the executive branch.

This process is taking place as the country is still under emergency law and 11 members of the Peoples' Democratic Party (HDP) are in jail. Only the left-wing parties — the HDP and the Republican People's Party (CHP) — oppose the reform proposal, and their numbers are not sufficient.

Since the ruling Justice and Development Party (AKP) shut down the media outlets it could not control, almost none of the naysaying lawmakers’ speeches are aired on TV. Opposition parties struggle to generate transparency and get their voices out to the public by using their cell phones and capturing and sharing images and videos on social media. In addition, they strive to show the public the reckless behavior of some AKP and Nationalist Movement Party (MHP) members, such as their breaking the internal voting rules by openly displaying their votes in each round of what is supposed to be a secret ballot.

It's mind-boggling that the majority of Turkish parliamentarians are voting willingly to surrender power to an imperial executive and are becoming increasingly violent and lawless against their colleagues.

On Jan. 19, Aylin Nazliaka, a seasoned lawmaker who is known for her courage and tenacious efforts in support of underrepresented groups, handcuffed herself to the podium in an effort to reach the senior members of the ultra-nationalist MHP and convince them not to surrender parliament's rights. Nazliaka aimed to generate a peaceful protest, similar to a filibuster, to raise public awareness and symbolize how helpless the opposition is in its efforts to block these amendments. Nazliaka explained that she wanted to protest wearing handcuffs because passing the amendments would end with locking parliament's doors altogether.

After seeing Nazliaka’s determination, several female AKP members — under the guidance of a male lawmaker — encircled Nazliaka. At this point a few left-wing lawmakers were also around the podium, and they all became victims of violent attacks by a female AKP lawmaker. Several photos show Gokcen Enc attacking her colleagues. The situation became so ugly that Pervin Buldan, a prominent HDP member, got kicked in the chest and was hospitalized with chest pains. Another HDP member was dragged on the floor by her hair. Safak Pavey, an outspoken CHP member, was kicked to the floor and her prosthetic arm was removed. Pavey was also hospitalized due to nerve damage. Nazliaka did not complain about her injuries, but from her screams heard on recordings, she also suffered.

To make matters worse, Ankara’s flamboyant mayor, Melih Gokcek, tweeted his congratulations, complete with hand-clapping emojis, to Enc, saying the country is proud of her. Others used sexual references to ridicule Nazliaka’s peaceful protest. Omer Turan, a conservative journalist, wrote, “Parliament is not the place to realize your personal fantasies. Handcuffs or whips, use them at your home. Don’t dirty the parliament.” Mainstream voices of the AKP criticized Nazliaka for disrupting parliament.

Members from both left-wing parties chanted “justice,” asking the parliament speaker to announce punitive action for the attacker. The speaker, a female member of the AKP, told them she was deeply distraught about the fight and the injuries, including Enc’s. (AKP members and pro-AKP accounts on social media claimed Enc was hurt.) At the end, there were no legal consequences for any of these violent acts.

And this was not the first attack on left-wing female lawmakers. On Jan. 11, a female CHP member, Fatma Kaplan Hurriyet, was attacked by male AKP members because she was part of a team that was recording and publishing AKP members as they showed their votes to each other or entered the booths in threes during secret voting. Although the physical and verbal attack was caught on cameras, no one was reprimanded for this attack, either.

However, one male parliamentarian was suspended: Garo Paylan, an Armenian HDP member. On Jan. 13, Paylan was suspended from three parliamentary sessions, not for physically or verbally attacking a colleague, but for uttering the words “Armenian genocide” during his speech. Paylan said, “Back in the day, we [Christians] were 40% of the population. Christians were represented proportionally at the parliament. A Christian was the one who initiated the writing of a pluralistic constitution. Now we are less than one in a thousand. Something devastating must have happened to us: I call it genocide.”

As other members started screaming at Paylan, the speaker told him, “Please correct your words, there was no genocide on these lands.”

Paylan continued despite endless slurs from his colleagues: “Let’s name it together. Armenian people know what happened to them. I know what happened to my grandparents.” But the audience would not quiet down. Paylan was accused of “hurting the Turkish nation, speaking with the language of the Armenian diaspora” and was reminded that he is “not a lawmaker of Armenia.” Finally, all parties, except for the HDP, voted to suspend Paylan and erase his words from the parliamentary records. Paylan told the press that the MHP had threatened to pull its support for the AKP’s constitutional amendments unless Paylan was punished.

From all these worrisome and crude events, we can deduce the following:

First, as parliament approves changes to surrender its right to audit ministers and the Cabinet, relinquishing its legislative powers, it has become a place of war. Recklessness and disrespect for existing laws have reached a climax. For instance, one of the sentences heard most often from the parliament speaker or anyone speaking is, “Who do you think you are?” On Jan. 10, during the first round of voting, for instance, Health Minister Recep Akdag was caught displaying his ballot openly. When confronted, he scolded his colleagues, saying, “What's it to you?" and added that he was not asking for their permission.

When lawmakers do not respect the law, what does that say for the rest of the country? That is a question frequently asked on social media now.

Next, one cannot help but question why AKP members are so eager to give up their legislative powers. The less deliberation there is, the less the public knows about what these reforms entail. The debates on pro-AKP media outlets have been focusing on the fights at parliament rather than the proposed changes. Considering there will be a referendum in early April after parliamentary approval, we see that AKP members are working on molding a favorable public opinion. The idea of an all-powerful presidency has not been popular in Turkey. However, more than 50% of the public favors rebuffing the pro-Kurdish HDP and secular CHP. So if the referendum can be represented as standing up for stability, security and the moral Islamic values of Erdogan, the AKP could easily get the majority “yes” vote in April.

That also helps explain why many feel compelled to punish those using the words “Armenian genocide.” It was less than six years ago that AKP spokesperson Yasin Aktay tweeted that the AKP would neither forget nor forgive the perpetrators of the Armenian genocide. Times have changed, yet Turkey has not yet outgrown its deadly sins.