A female opposition member of Turkey’s parliament takes social media by storm after threatening to throw her shoe at ruling party deputies. 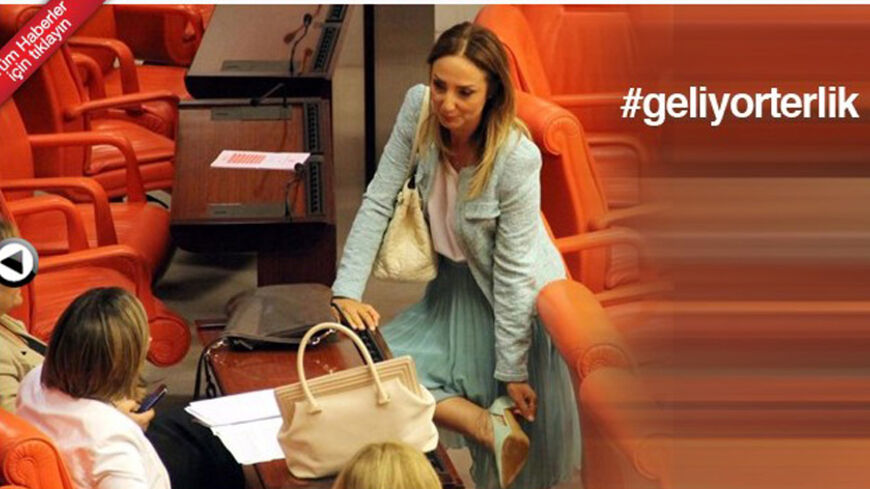 Aylin Nazliaka holds the heel of her shoe in parliament in a photo on her webpage that has a link to the "Slipper's coming" Twitter account. - http://www.aylinnazliaka.com.tr/

In many regions in Turkey, mothers exasperated with a naughty child will take off a slipper and raise it menacingly toward the miscreant, shouting, “Look, the slipper’s coming!” That is the first warning. If the child — typically a boy — fails to stop misbehaving, the slipper soon flies through the air. This “slipper disciplining” usually bears fruit, with the kid either running away or getting hit and calming down. More often than not, the first warning suffices and the child behaves before the slipper takes off.

A similar scene unfolded last week in an unlikely place — the Turkish parliament. Aylin Nazliaka, one of the most active female lawmakers of the main opposition Republican People’s Party (CHP), was making a speech about violence against women in Turkey when she got exasperated with colleagues from the ruling Justice and Development Party (AKP) who sought to sabotage her speech, hurling taunts of her being a “cheapo” and “having Botox.”

“The devil is tempting me to take off a shoe and throw it at you!” an incensed Nazliaka shouted. Yet, the experienced boys of yesteryear ignored the warning and went on with their taunting. “But you are not worth even a shoe,” Nazliaka replied before leaving the rostrum amid a hail of insults.

Nazliaka’s speech on gender discrimination was no doubt a stinging one. “We have come to a point where [the country] discusses what women should wear, what color their lipstick should be, whether pregnant women should go out in the streets, whether women’s laughing out loud is immoral or not and even whether women and men should perform the folk dances together. Even mixed-sex education is being questioned. And you are responsible for all this!” Nazliaka said, shouting at the AKP benches. “Three women are killed every day [in Turkey] and violence against women is up 1,400%, remember? The murderers are emboldened by those who attempt to dictate women how they should behave. Don’t look too far, it’s you I’m talking about! You are the ones emboldening those murderers!” she declared.

Nazliaka’s two-minute parliamentary speech reverberated for days in the media and among politicians, including President-elect Recep Tayyip Erdogan. “Don’t throw that shoe, you’ll need it,” Erdogan said, adding that the lawmaker’s remarks reflected her low “quality and breeding.”

Nazliaka retorted in even harsher terms. “He [Erdogan] would have certainly preferred a shoebox instead of a shoe. Had I thrown a wristwatch, his MPs would have leaped to grab it in the air,” she said, referring to a probe into alleged large-scale corruption among AKP members and cronies, including a bank manager who stashed millions of dollars in shoeboxes at home and a minister accused of accepting an ultra-expensive watch as a bribe.

Nazliaka’s speech took the social media by storm. Twitter users, mostly women, lent the lawmaker support with hundreds of tweets under a hashtag called “slipper’s coming.” In a message reflecting how deep-rooted the “slipper discipline” tradition is, one user tweeted, “I’m the grandchild of a grandma who never missed the target.”

The messages came complete with photos of women’s shoes of all styles, colors and sizes, including the now-famous high heels Nazliaka wore during the stormy parliamentary session. In the meantime, “slipper throwing” games hit the Internet and some shrewd footwear companies took the opportunity to advertise their products.

In fact, shoe-throwing — an Arab gesture of insult — has become a popular expression of protest globally since the Arab Spring. The world had first become acquainted with it after Saddam Hussein’s fall in Iraq when it watched Baghdad residents hit the strongman’s toppled monument with shoes and slippers.

In Turkey, however, things are a bit different, with the slipper used as an instrument of taming mischievous children. Ibrahim Ethem Basaran, a prominent scholar and an expert of Anatolian culture at Ankara University Educational Sciences Faculty, told Al-Monitor: “Slipper throwing in Turkey is not an act of insult or violence. A slipper is being thrown only to stop a naughty kid, when there is nothing else to throw around. Mothers would take a slipper and throw it, but not before warning ‘Look, slipper’s coming.’ The underlying intention is to discipline the child, but neither the slipper nor beating has a place in education. No teacher would throw a shoe at a child. The act is limited to exasperated mothers who are left helpless. The kids themselves would not care much. They would laugh and run away.”

In comments on Nazliaka’s behavior, Basaran said: “The lawmaker is likely to have witnessed slipper throwing in her childhood and remembered it while speaking in parliament. Just like a helpless mother, she could have felt the urge to throw a shoe.”

Despite the outpouring of support on social media, Nazliaka’s fury changed nothing in the parliamentary debate where the episode unfolded. True to style, AKP lawmakers voted en masse to reject an opposition proposal that would have enabled victims of violence staying in women’s shelters to cast their votes in elections. Anything about the session but the bill’s purpose made the headlines. No one knew why a basic democratic right was voted down. And Nazliaka, who was the lawmaker who submitted the proposal, wound up discussing her shoes rather than her bill.

Some 2,500 Turkish women currently accommodated in shelter houses are unable to vote on the grounds of “safety” since no legal arrangement exists on how they can cast their votes. Those victims of violence will be considered nonexistent in the general elections in 2015, just as they were in the municipal and presidential elections this year.

Though the bill was voted down, the click-clack of Turkish women’s heels reverberated across the world as many international media outlets covered the story and foreign women voiced their support on social media.

Speaking to Al-Monitor, Nazliaka herself sounded optimistic. “The shoe became a symbol around the world. Those who represent the dark mentality of medieval ages are seeking to push women out from all realms [of public life], but they will continue to hear the click-clack of our heels just everywhere. They will see how this will grow into a women’s revolution, taking its first steps in Turkey and spreading across the region. Turkish women are capable of moving mountains,” she said.

“I was greatly encouraged by the scale of reaction the incident generated on social media and expressions of support from all over the world. Female cyclists from Poland, for instance, posted a collective picture with their shoes, saying they were ready to come to Turkey in support. There is support pouring out from all over Europe and the foreign press is reporting the issue. An impulse that popped up as a motherly relic had a truly big impact,” she said.