The Justice and Development Party's (AKP) selective conservatism, aiming at regulating Turkish women’s public space, is loudly disapproved by a minority while the majority doesn’t react. 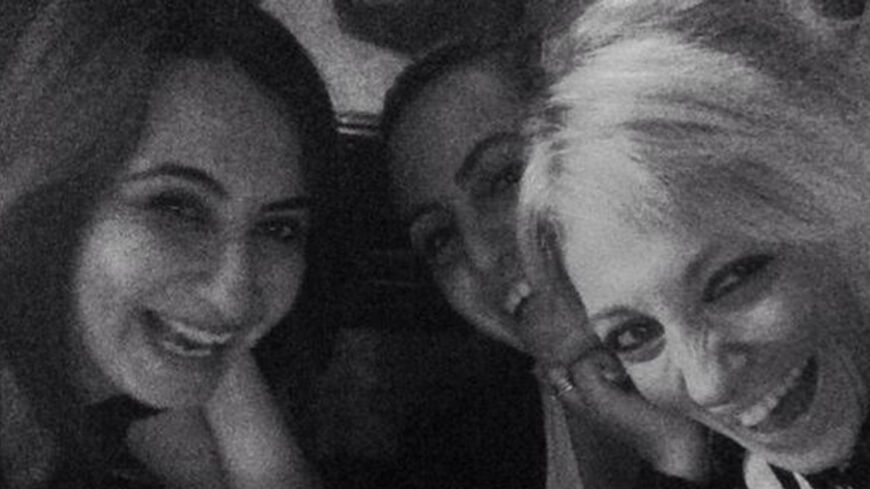 Female Twitter users in Turkey posted photos of themselves laughing after a July 28 comment by Deputy Prime Minister Bulent Arinc stated that women "should not laugh out loud in public." - Twitter/@arzubutuner

On July 28, Turkish Deputy Prime Minister Bulent Arinc attended an Eid-al-Fitr celebration in Bursa. Arinc had a lot to say on moral collapse in Turkey to a mostly male audience. The most striking part of his speech was about “regression in morality and chastity of women.”

With repeated references to the Quran and hadith (Prophet Muhammad’s teachings) Arinc was well aware that his words would stir controversy when he added: “When someone speaks like this they say, 'What language does this man speak?'" Arinc was on the mark with his last comment, for his words that day generated an avalanche on social and print media.

Hundreds of women posted photos of themselves, their friends and celebrities laughing on social media.

A collage of photos of a laughing Arinc went up promptly, as did laughing images of Prime Minister Recep Tayyip Erdogan’s wife, Emine, and laughing female ministers. As photos poured in that day, many newspapers had “photo galleries of laughing female images” linked to the news of Arinc's preaching on chastity and morality. The messages tagged with the photos were meaningful: “I laugh, therefore I exist,” “We will not learn how to laugh from you” and “We lost many freedoms, but our laughter is still alive.”

Politicians reacted to Arinc’s words as well in the heat of the presidential election campaign. Ekmeleddin Ihsanoglu, joint candidate of the main opposition, tweeted “Our country needs the laughter of the women and everyone more than anything.” In one day, Ihsanoglu’s tweet got 5,500 retweets. The Republican People’s Party (CHP) suggested all women should laugh while they cast their presidential ballots on Aug. 10. CHP member of parliament Aylin Nazliaka tweeted, “Women are murdered, forced into underage marriages, violence, abuse, rape is on the rise. We have no opportunity to laugh.”

Indeed, Nazliaka and Arinc had been in a debate about sexism and the appropriate code of conduct in the parliament on December 2012. Nazliaka’s use of the word “vagina,” when she was discussing the abortion laws, and her alleged glare at Arinc apparently generated uneasy feelings in him. Arinc went on the record to say, “When talking about abortion, you uttered a word that made me blush. A woman parliamentarian, married with a child, how can she talk about one of her organs so openly?” Arinc’s words became the most trending topic immediately as independent news sites gathering the most intriguing comments under the headline “Arinc’s Vagina Monologues.” One commentator, recalling multiple incidents when Arinc cried in front of news cameras, wrote, “Arinc is embarrassed by the word ‘vagina,’ but don’t pressure him so much or he will again cry and cry.”

Arinc, 66, had previously made headlines when he was tossing out a traditional paste — mesir macunu — which purports to increase male potency. During a festival before the cameras, Arinc shouted out to the director of Turkish Radio and Television, “Take it, Ibrahim, you really need this!” On a different incident, Arinc had asked a singer not to sing one particular traditional Ottoman song, because the lyrics had the word “raki,” the potent, national alcoholic drink. His comments generated another high tide on social media, where people reacted by sharing glasses of wine, beer and raki with songs that had attributes to drinking alcohol.

Arinc is also one of the founding members of Justice and Development Party (AKP) and his controversial statements are not exceptional for the core voters of the party and AKP leadership. Indeed, on the same day, July 28, in Ankara an advertisement appeared on a city bus for a book titled “Fire of Flirting." The conservative author asked, “Young men, would you prefer your future wife to date other men? Would you like to be the recipient of a bitten apple?” Following this incident, photos of bitten and whole apples were shared on social media along with Adam and Eve and other creative references to apple through centuries.

AKP’s controversial incidents about chastity and decency have multiple examples in recent history. In May 2013, a couple holding hands were warned by loudspeakers not to act against public moral standards at the metro station in Ankara. This incident led to “public kissing protests,” one of which was attacked by a small number of knife-waving conservatives chanting “Allahu Akbar!”

By Ankara standards this may be normal, considering that the mayor of Ankara, Melih Gokcek, has openly campaigned against abortion, even in cases of rape. In June 2012, Gokcek said, “Women should give birth even if it was rape. The government will take care of the baby. The baby is innocent; the woman should be decent and avoid the abortion option. If there should be someone to be killed, the woman should kill herself, not the baby.”

Similar words against abortion were uttered by the former minister of health, Recep Akdag, on May 2012. Aktag said, “The rape victim should give birth and the state will raise the child.”

The AKP elites' controversial approach to women has been consistent. In March 2009, Veysel Eroglu, former minister of environment and forestry, scorned a woman seeking employment: “Don't you have enough house work to keep you occupied?” Eroglu was not alone in this mindset, for Minister of Finance Mehmet Simsek told reporters, “Unemployment levels increase due to women seeking employment.”

Homicide rates for women increase at worrying rates in Turkey. It is even more worrying that the government is useless at protecting potential victims. About 12% of female murder victims are said to be murdered when they are under state protection. That said, in one high-profile murder, in April 2009, Istanbul’s Police Chief Celalettin Cerrah referred to the young female victim and said, “Her family should have kept a better eye on their daughter.” The victim was murdered by her boyfriend, and women’s organizations demanded that Cerrah apologize for his comments blaming the victim and her family.

Erdogan added fuel to the fire following this high-profile murder case in July 2009. He said, “Nowadays we hear of horrible murders. As parents, we should question ourselves and ask, ‘Where did I go wrong?’ There is a fast erosion of morality. If the teenagers [implying young girls] are left to their own devices, they will either end up with bums or losers.” In July 2014, Erdogan went on the record to advise young girls to “get married promptly when you have a suitor.” He advised young girls not to delay marriage, even to get married while still in school. Otherwise, they would become old maids. Erdogan repeats his call for married women to have at least three children for economic success, but updated his suggestion in 2013: better to have five, actually.

AKP elites’ approach to gender and morality issues has paved the way for a selective and quite pragmatic conservatism on social and cultural policies. Constant focus on recoding gender relations in the name of “loving and protecting our women as our honor” has produced unintended consequences. Some of those unfortunate results can be seen from the reaction to each of these statements and policies exemplified here.

Each high moral preaching session generates a public outcry highlighting AKP elites’ hypocrisy in a humorous way, yet we must also acknowledge the increasing number of submissive women and men who cheer on AKP politicians. While an active minority reacts in social media and through organized protests, the majority remains quiet and submissive.