Turkey’s government asks whether "abortion is a disease.” 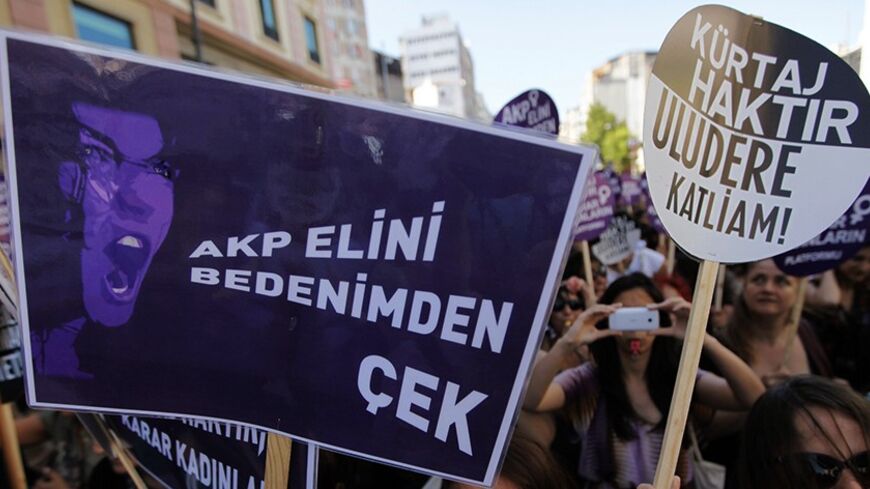 Demonstrators in Istanbul protest against the government's plans for a new abortion law, June 17, 2012. The banners read, "AKP, keep your hands off my body" (L) and "Abortion is right, Uludere is massacre!" - REUTERS/Murad Sezer

On Feb. 18, news broke that a 15-year-old under the care of Child Protective Services was a victim of rape. This crime was brought to light after authorities discovered that the girl was nine weeks pregnant. Child Protective Services sought permission for an abortion because the victim was a minor, the pregnancy had resulted from rape and, most important, the victim’s mental health was of concern. The courts denied permission to terminate the pregnancy of a child who had no choice in becoming pregnant.

On March 4 in Adana province, a 22-year-old woman attempted to commit suicide because she had been unexpectedly denied an abortion at a government hospital. Hearing this news, I could not help but recall the words spoken in June 2012 by Melih Gokcek, Ankara mayor and Justice and Development Party (AKP) member. Commenting on unintended pregnancies, Gokcek asserted, “What is the crime of the baby that he gets aborted? The pregnant woman should commit suicide instead.” It is rather disturbing to see that Gokcek’s wish might be coming to pass.

Indeed, since May 2012, abortion has become a much-politicized issue in Turkey. This development can be traced to a statement by Prime Minister Recep Tayyip Erdogan: “I see abortion as murder.” He added that he also has a problem with Caesarean sections. Erdogan wondered aloud, “Why should the government pay for these?” One can be certain that when Erdogan voices his opinion, it matters dearly in Turkey, affecting the lives of many, for better and for worse. The issue of a woman’s right to choose is no exception.

In summer 2012, there were demonstrations in several cities against the possible banning of abortion. The AKP government did not, in the end, ban it. As with new restrictions placed on alcohol, Internet access and other personal choices, Erdogan was savvy enough to refrain from an outright prohibition. Hence, the AKP can rightfully claim, “There are no bans, just regulations.” Abortion remains legal in Turkey during the first 10 weeks of pregnancy. Every adult woman, married or single, has this right, but government hospitals no longer provide abortion services, because the government decided behind closed doors to stop funding them.

On March 11, a peculiar headline appeared in the press and on social media: “Turkish Society of Obstetrics and Gynecology: Abortion is banned covertly.” Things get a bit tricky here, because the law has not changed. The head of the OB/GYN association, Dr. Cansun Demir, told Al-Monitor, “The option to click on 'Abortion' is removed from our Web page.” Hence, his doctors can no longer approve this procedure, and the government will not cover the expense.

Demir explained, “The right to choose to terminate a pregnancy based on the woman’s decision is legal, but we cannot provide the service. What is left to medical doctors is either classifying any abortion as a medical necessity or redirecting the woman to seek private care to terminate the pregnancy.” Demir said they cannot comprehend or explain the legal basis of this change to the patients, because it appears to be arbitrary.

One must give credit to the AKP ruling elites for their mastery in continually revising laws and regulations until they fit their particular worldview and interests. Hence, Minister of Health Mehmet Muezzinoglu was correct when he asserted, “Abortion is not banned.” Yet, no state hospital is allowed to perform the procedure because there are no longer funds allotted for it. When questioned further by a journalist, Muezzinoglu shot back, “Is abortion a disease? No. Why should the government pay for it? The laws have not changed. They are the same. What issue are you trying to abuse here?”

Muezzinoglu is known to care deeply about Turkey's reputation abroad. He cares so much that he was almost distraught when he saw a photo of a man carrying his ailing son on his back in a sack, trying to make his way to a hospital along a snow-covered road in February. Sadly, the child died. Muezzinoglu asked, “How many children die from the cold in Turkey? Why are these journalists trying to hurt our international prestige with such photos?”

With regard to a woman’s right to choose, the AKP has quietly made it impossible for the poor needing to terminate an unintended pregnancy to access safe options. One's personal beliefs might be that willfully terminating a pregnancy is immoral, and it should never happen. Without getting into religious or moral arguments, however, simply put, a politician’s personal beliefs should not cause harm to anyone.

All women, in particular young, poor, working-class women, are going to fall victim to the AKP’s covert action to restrict women’s access to reproductive health care. When state hospitals cannot perform abortions, the cost of the procedure will increase in the private sector. Research has shown that highly restrictive abortion laws do not translate into lower abortion rates. Also, in conservative societies where abortion is considered murder, banning abortions generates even more death, putting both the life of the mother as well as the child's at risk. Those who claim to care about the sanctity of life should ask themselves, when a desperate woman is denied the right to choose, or when a couple is prohited a safe, legal, accessible abortion, what options remain available to them?

For those who have abundant financial resources, the issue can be handled easily, but what about poor or young unmarried women? Where can they go? The AKP is pushing them toward a life of shame and possible harsh retribution from their relatives — honor killings are not a rarity in Turkey — or into an unsafe back-alley or self-induced abortion. Back-alley butchers will be the only ones to benefit from the AKP’s actions.

Some might shake their head in confusion and ask, “Why not seek clarification of the regulations? Surely they would be found unconstitutional?” I would be the first to ask this question, given that safe abortions are turning into a privilege for the rich, while state-sponsored violence against poor women reigns. Recent public revelations involving AKP officials, however, put its efficacy in doubt.

​In an alleged phone conversation, Efkan Ala, the former undersecretary and current minister of interior, can be heard ordering a governor to arrest a journalist: “Tell your men to break his door open if necessary, and just arrest him.” Ala then explains his worldview and approach to the law in referring to the fact that the AKP had acquired 50% of the vote in the last election. To him, this means that it is entitled to change any laws it wants and make incriminating and criminal allegations disappear at will.

The world according to the AKP can be good for some, but it is painful for many others. The issue of abortion is only one example of the party's attitude that it can do whatever it wants with the law. There are already more than enough tragic examples of women around the world who were made desperate by unintended pregnancies. The mentality of “have the baby and the state will take care of it” may not be a cure, and it is certainly not supportive of a woman’s right to choose. To deny a woman this right, however, is to make her a victim of state violence.

Even when the AKP does not overtly change laws, it has the power nonetheless to muddle in restrictions on personal liberties. While AKP parliamentarians struggle with their corruption problems, pleading with the nation, “Doesn't one have the right to sin?” we must ask, “Is the right to choose a privilege only for the wealthy in Turkey? What of the inalienable rights of women, the poor, the minorities and even the sinners?”