Abortion is illegal in much of the region, and there are various legal and societal barriers to the practice in the countries where it is allowed. 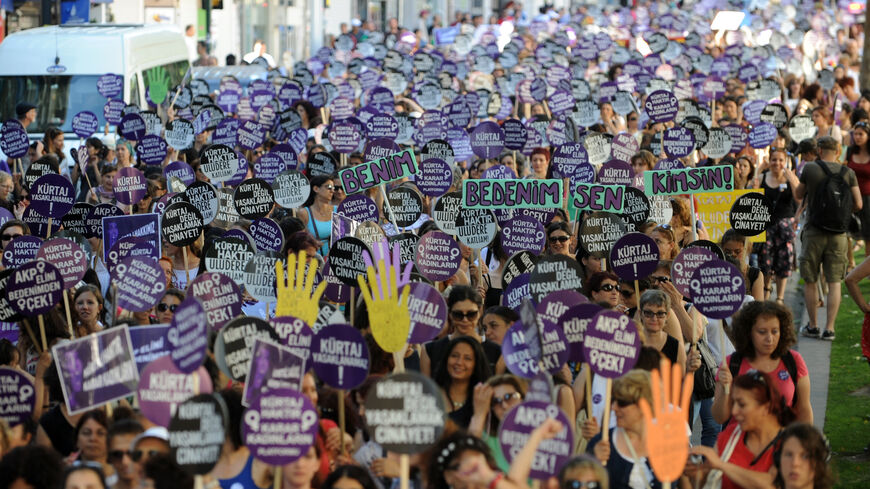 Turkish women hold placards and chant slogans as they march to Taksim Square during a demonstration against the government's plan to reduce the time limit for abortions, on June 17, 2012, in Istanbul. - BULENT KILIC/AFP/GettyImages

A document leaked in the United States yesterday purportedly indicating that the Supreme Court ruled to overturn the landmark Roe vs. Wade decision, which determined that abortion is a constitutional right. The news prompted some comparisons of US abortion laws to those in the Middle East. Abortion is illegal in most of the region and North Africa unless the pregnancy is a risk to the mother’s health or there is a fetal abnormality. However, here are the three countries where abortion is allowed.

Abortion is sometimes legal but significantly restricted in Israel. Women who want to have an abortion in Israel must receive approval from a “pregnancy termination board.” Abortions must meet at least one of the following criteria, per the Israeli Ministry of Health.

Members of parliament from the left-wing Meretz Party have recently pushed for reforms that would give more of the decision-making power on abortion to women. Some religious parliamentarians have voiced opposition to these efforts, The Times of Israel reported in January.

Abortion is legal in Turkey without restriction through the first 10 weeks of pregnancy. Abortions may be possible after that if the pregnancy is a risk to the mother or the fetus has an abnormality. Abortions performed in such instances must be reported to health authorities.

Abortion is not necessarily accessible in Turkey, however. In 2020, the Turkish news outlet Duvar reported that most public hospitals do not perform abortions, regardless of women’s demands. Only a limited number of private hospitals do abortions, according to the outlet.

Abortion is legal in Tunisia until the end of the first trimester, and women do not need permission to get an abortion. It is also allowed after the first trimester in the event of fetal abnormalities or a risk to the mother’s health. There are public “family planning centers” throughout the country.

Know more: Some of Iran’s restrictions on abortion are relatively recent. For years, abortion was legal only if three doctors agreed that the pregnancy would risk the woman’s life or the fetus had severe disabilities. A November 2021 law replaced this system with a panel consisting of a judge and two medical professionals. It also requires state media to denounce abortion and for security authorities to identify illegal abortions. The measure is aimed at boosting Iran’s population.