Turks protest prison term for woman who killed her rapist

A Turkish woman who murdered and beheaded her rapist has been sentenced to life in prison, prompting activists to decry the Turkish justice system, which so often offers leniency to men and harshly punishes women for the same crimes. 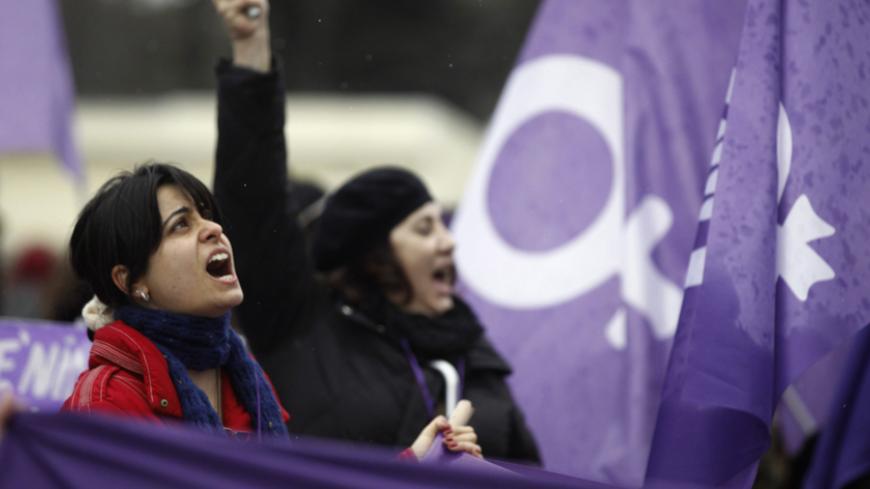 Women protest against the government and violence against women, a day after International Women's Day in Istanbul, March 9, 2014. - REUTERS/Osman Orsal

Nevin Yildirim made the headlines in 2012, both domestically and abroad. The young Turkish woman had murdered her rapist, beheaded him and tossed the head in the village square. Pregnant with the rapist's child, she was barred from having an abortion. She would later place the child in state care. Yildirim is now in jail, serving a life sentence. The case has stoked fundamental questions on the Turkish judiciary’s approach to women, the media’s sexist language, the weight of a woman’s account in cases of abuse and the say the state and fathers have on the fate of an unborn child.

Yildirim, 29, was a married mother of two in a village in the southwestern province of Isparta. A farm laborer with no social security, she led an ordinary life until she crossed paths with Nurettin Gider, who supervised workers in the fields.

According to Yildirim, Gider began making advances toward her at work. She turned him down, but he persisted. One night, when Yildirim’s husband was away, Gider arrived at her house and raped her at gunpoint.

In Turkey, the first question posed to women claiming rape is: Why didn’t you resist? Yildirim responded: “My father-in-law was living on the ground floor. The kids were asleep. [Gider] threatened to kill the kids. I couldn’t cry out [for help]. It was the first time he raped me.”

“Sometimes he would come drunk, take out his gun and have his way. Sometimes I would manage to talk him out and send him away, but resisting was not always possible. Sometimes he would beat me,” Yildirim said. She discovered that Gider had been bragging about his deeds in the village, even claiming to be taking aphrodisiac pills before his visits. “The rumors were spreading like wildfire in the village. I was ashamed to even go out, spending my days at home alone,” she said.

While Gider was busy boasting, Yildirim found out she was pregnant, and attempted to have an abortion. In Turkish hospitals, however, a woman's solo request for an abortion does not suffice. The consent of the husband is also required. Yildirim couldn't dare tell her husband. She returned home without an abortion.

On Aug. 28, 2012, Yildirim decided to break the vicious cycle of rape at gunpoint and the swirling rumors that had made her a prisoner in her home. Gider was once again at her door with a gun. She refused to take him in. The man tried to enter the house through the balcony. Yildirim grabbed the hunting rifle hanging on the wall and pulled the trigger several times. She said she has no recollection of what happened afterward. The next thing she knew, she was sitting at the gate of her house with bloody hands, with her 6-year-old daughter asking, “Mom, what happened to your hands?” She had decapitated Gider and tossed the head on the village square, shouting, “Here is the head of the one who dishonored me.”

Yildirim was arrested and requested an abortion from the prison authorities, but the hospital would not perform one since it was beyond the 10-week period allowed by Turkish law. Yildirim had no other option but to give birth, and on Nov. 17, 2012, she did. She refused to touch the baby girl, though, saying she would not be able to give up the baby if she breastfed her even once. She gave the child away to the state. The wife of President Recep Tayyip Erdogan gave the baby a name, Elif Sila. In the meantime, Gider's wife volunteered to take the baby. Newspapers published surveys, asking readers whether the Gider family should be allowed to adopt the child. The baby eventually was placed with a foster family.

Yildirim remained under constant media scrutiny from the moment she killed Gider. The case came to be known as the “severed head murder.” A photo of a smiling Yildirim at the prison gate accompanied reports about the “female murderer.” She had become the media’s symbol of “the abortion-seeking murderous female.”

Abandoned by both relatives and neighbors, Yildirim received empathy only from a handful of feminists. On March 25, the day of the verdict, feminist activists flocked to the Isparta Heavy Penal Court before police aggressively forced them from the courtroom. The court handed down the heaviest sentence possible: life in prison.

The 125-page verdict, made public recently, stated that Yildirim and Gider had a “romantic affair.” It made no mention of rumors, social environment or the psychology of a woman denied an abortion. The court decided after the lengthy trial that the relationship had been consensual, ignoring Yildirim's rape argument.

In remarks to Al-Monitor, Yildirim’s lawyer Huseyin Aksoy argued that the court's verdict was biased. The logic of the ruling, he said, "is inconsistent with the ordinary course of life. It was issued without any consideration or investigation of Nevin’s social and psychological conditions and the environment and community in which she lived. A woman having a consensual relationship would pay attention to avoid pregnancy or take contraceptive pills. A man [having an affair] would not go to see the woman with a gun.” Aksoy noted that the three-judge panel included two women.

The verdict sparked uproar, especially among women, who were exasperated by a recent string of misogynist court rulings. On April 17, a group of 40 feminist artists displayed bed sheets with Yildirim’s image on them in central Istanbul. On March 29, activists held a demonstration carrying banners that read: “Down with misogynist justice” and “Nevin’s voice is our voice.” An online petition seeking freedom for Yildirim will be submitted to the Appeals Court, which will make the final decision in the case.

Prominent lawyer and women’s rights activist Hulya Gulbahar told Al-Monitor that Turkey’s “entire judicial history is based on the notion that women are cheaters and seducers who lie in all circumstances.” According to rulings by the European Court of Human Rights, a woman is deemed to have willingly engaged in intercourse when she has given a “free, informed and express” consent, Gulbahar explained. Yildirim’s case cannot be passed over as a “romantic affair,” she argued, stressing that any forced sexual act that the woman resists must be considered sexual assault.

“The court ignored both the European Court of Human Rights criteria and universal practices. We are no stranger to this justice system, which hands down merciless penalties when the offender is a woman, while showing leniency to men committing crimes against women and even awarding them with lighter sentences,” Gulbahar said. “The state’s mentality rests on the notion that men and women are not equal. Bodies that deal with women, including the judiciary, are full of people of the same mentality.”

That’s Nevin Yildirim’s story: the chronicle of how a state refused to take its hands off a woman’s body, using the abortion pretext, and forced her to give birth to an unwanted child whose name was then chosen by the president's wife. The state ignored her rape claim, social environment and psychosocial condition, and then penalized her in the heaviest way possible. A woman now silently languishes in jail for the rest of her life — alone, stigmatized and torn from her kids — with only a handful of women determined to bring about change, braving the truncheons of the police.