After mass rape by the Islamic State, Yazidi women still struggle to break the silence

Some of the Yazidi women sold and enslaved by Islamic State militants told Al-Monitor about their horrific experiences, including repeated rapes, but others claimed they were only forced to cook and clean for fear of being stigmatized by their conservative community. 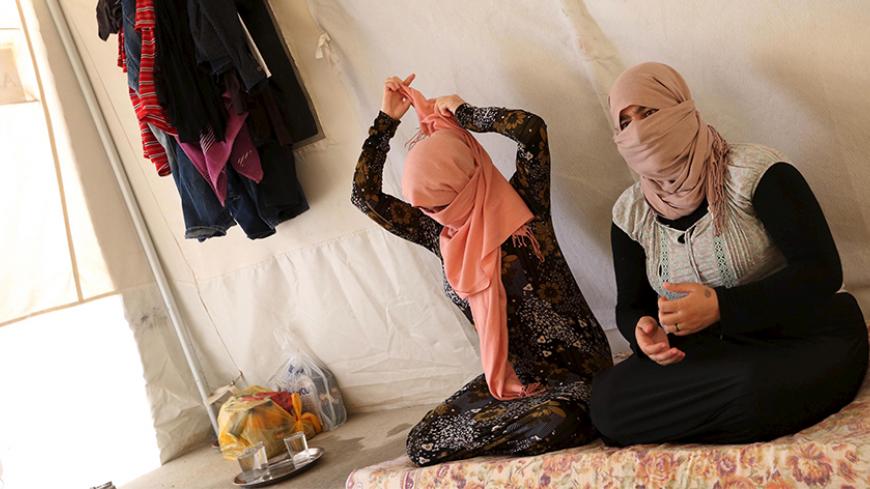 Yazidi sisters who escaped from captivity by Islamic State militants sit in a tent at Sharya refugee camp on the outskirts of Dahuk province, Iraq, July 3, 2015. - REUTERS/Ari Jala

DAHUK, Iraq — The first man Aniya was forced to marry was an Islamic State militant called Abu Safouan. She was 41 and he was 22, but still he bought her and her 3-year-old daughter at a slave market in Raqqa. After he had raped and abused Aniya for 20 days, he told her he was fed up with her and sold her to a 27-year-old man who called himself Abu Ali Sham.

“He used to rape me when my daughter was outside the room. She often screamed and cried, because she knew something was wrong, but he didn’t care," Aniya told Al-Monitor, adding, “I even refused to take showers, hoping that Abu Ali Sham would leave me alone, but he still forced himself on me, saying that if I refused he would kill me.”

On Aug. 15, 2014, IS militants entered Kojo, one of the villages in Mount Sinjar. They slaughtered dozens of Yazidi Kurds, including Aniya’s husband, and kidnapped more than 100 women and girls. The Yazidi women — between the ages of 20 and 42 — who talked to Al-Monitor are from Kojo. They described how the men were separated from the women after IS entered the village. The youngest women were sold almost immediately, while the older women were transported from location to location in Iraq and Syria, until they too were sold to IS militants.

Aniya was enslaved by IS militants for eight months. Three months ago, she and other Yazidi women were rescued by smugglers who infiltrated the terrorist organization, she said. After that, she arrived in the Kurdistan Region of Iraq, where she was taken to a hospital for medical examination, including tests for pregnancy and sexually transmitted diseases.

She talked openly about the horrors she experienced, but when it came to pregnancy, Aniya looked uncomfortable discussing the topic. “The men I was ‘married’ to gave me birth control pills," she said, ending the conversation.

Another 35-year-old woman who was also enslaved by IS militants for months said she heard of girls who became pregnant, but she never met any of them. “But if a girl comes back pregnant, I think her family should help her," Jinan, a Yazidi woman from Kojo, told Al-Monitor.

The Yazidi community does discuss the nightmare that IS has unleashed on it, like the massacres and rape of girls and women, more openly now than before. In September 2014, the religious leader of the Yazidis, Baba Sheikh Khurto Hajji Ismail, issued a statement encouraging Yazidis to accept women returning from IS territory and to help reintegrate these victims, because they had been ”subjected to a matter outside their control.”

“This statement helped a lot, because before it was a really closed society. A lot of things happened in secret," Behar Ali, the head of Emma, a women’s organization that promotes women's participation in the Kurdish region, told Al-Monitor.

However, there is one problem: The women hardly talk about pregnancy. Many pregnant women seek abortions to avoid being stigmatized after spending months in sexual slavery by IS militants. Nongovernmental organization workers and doctors do acknowledge that Yazidi women are coming back pregnant and have abortions, but it's rare for anyone to acknowledge it publicly. This has much to do with their conservative culture, in which talking about such issues brings shame upon the individual and their families.

“Yazidis, a conservative minority with roots in several ancient religions, do not even marry outside of their community. So it is a big problem when they become pregnant by Muslim men. The children will not be accepted," Behar added.

It is not clear how many Yazidi women have had abortions. According to the Seed Foundation, a registered charity based in Erbil, around 2,093 enslaved Yazidis have found a way to escape from IS militants, 1,332 of them female. Kurdish families collected money to buy back their family members or had them smuggled out of the country.

Approximately 2,000 Yazidi women are still being held by the extremist Sunni group, an aid worker who deals with women and girls who survived IS captivity told Al-Monitor on condition that her name and the organization she works for not be revealed.

Having an abortion is illegal in the Kurdistan Region, even in cases of rape, unless giving birth would endanger a woman’s life. However, aid workers who are trying to increase public awareness of abortion as a basic right for women do acknowledge that in Dahuk, some doctors give the girls abortion pills or carry out abortions themselves. This happens behind closed doors, although the Ministry of Health knows about it, according to the aid workers.

“Let’s say that if rape victims need an abortion, they can get one," the same aid worker told Al-Monitor, adding that she had not heard of any cases in which a Yazidi woman decided to keep the baby.

She added, “Some girls come back and tell us they have been sold to IS members eight times. Upon returning to their families, they are so traumatized they need a lot of psychological care. Pregnancy would only increase the burden they have to carry. Some even try to commit suicide.”

She said that while working with Yazidi women, she met two girls who were pregnant by IS militants and who decided to take abortion pills. However, she also met a lot of women who didn’t even want to admit they had been raped.

“They say they just cooked and cleaned. Or they make up some heroic story about how they escaped and killed their rapist. They completely block the horrors they have experienced,” the aid worker added.

Jinan, who was also kidnapped by IS militants last year, told Al-Monitor that she just cooked and cleaned for an IS militant called Abu Mohktar, who bought her and forced her to be his wife.

“He used to beat me and drag me across the floor by my hair. He was an aggressive man, but no, he never raped me.”

The names of the Yazidi women have been changed upon their request.