A threatening tweet against a jailed Kurdish opposition leader’s wife has Turkey up in arms against the patriarchal mindset that threatens women with sexual violence. 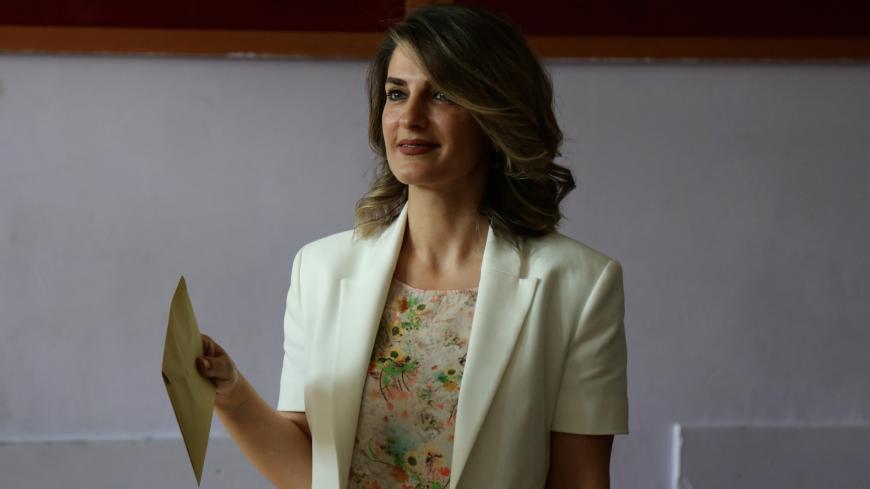 On June 13, Turkish social media was rocked by a crude threat from a pro-Justice and Development Party (AKP) account. The target was Selahattin Demirtas and his wife, Basak Demirtas. Demirtas, the former chair of Turkey’s pro-Kurdish People's Democratic Party (HDP), has been imprisoned since Nov. 2016 along with his co-chair Figen Yuksekdag.

Vedat Muti tweeted that Demirtas “has been in prison while his wife is free," saying, "She must be hot by now, one should extinguish her fire.”

Muti has been arrested, said Mahsuni Karaman, attorney of the Demirtas family. The complaints against him included intimidation, slander, incitement and sexual threats, Karaman explained.

Muti’s Twitter account was suspended. Screen shots provide ample information about his status as an “AK troll,” as certain pro-AKP social media users are called. These accounts often display flattering images of Turkish President Recep Tayyip Erdogan and most of their followers are others like them.

A hashtag meaning “We stand with Basak Demirtas" trended and political figures spoke in solidarity with the Demirtas family, condemning the tweet. Justice Minister Abdulhamit Gul denounced the tweet as well.

Female politicians and journalists who are critical of the government are frequently subjected to sexual objectification, rape threats and slurs from such accounts. It's credited as one of the reasons the number of women in politics is dwindling in Turkey.

One of the strongest voices against the offensive words has been that of Meral Aksener, leader of ultra-nationalist IYI or Good Party. In a searing speech at the parliament, Aksener said bluntly, “This corruption will continue until the people who govern over us take a clear stance against it. So I am calling the government and especially President Erdogan to make their point of view known.”

Aksener asked that “dirty hands” be kept off women and said these sorts of explicit sexual threats owe to the indifference of the government.

Such sexual comments about “lonely” women can have grave consequences. If a woman is singled out as “lonely,” meaning without a husband — divorced, widowed or simply home alone — she becomes a social anomaly. A patriarchal society dictates a woman’s place is with a man, and "lonely" women are the pariahs. Not virgins but still of childbearing age, they are associated with promiscuity and their sexuality must be controlled. This perception forces women to remarry as soon as possible, even into “levirate” marriages, where widows are compelled to marry their dead husband’s brothers.

This sort of entitlement can lead to rape and even murder. Systemic rape often goes unreported as women suffer in silence. In the notorious case of Nevin Yildirim, for example, she quietly suffered rape for three years while her husband was working out of town for long periods of time. She got pregnant by her rapist and the town exploded in gossip. Yildirim murdered the rapist to defend her honor and was sentenced to life in prison.

The state’s patriarchal Islamist ideology has made women’s bodies vulnerable. In its logic, women are the property of men. Each political conflict is seen as a battle. When the battle is over, the winner can have the loot, including the women and girls. For example, after the July 15 attempted coup, pro-AKP social media posts claimed that the “wives of putschists are our trophies.” During the referendum of 2017, an employee of Istanbul Municipality posted on social media that it was war, and when those who oppose the presidential system lose the referendum, “we can have their daughters and wives.”

Suleyman Demirtas, younger sibling of Selahattin, told Al-Monitor, “These sorts of threats are made to further polarize society and keep women locked in the house and obedient to men at all times. The HDP champions women’s struggle for equality, and it is not a gift or a blessing from the men. Kurdish women and women who are working in HDP’s ranks have earned it all by themselves. If women are obedient and subservient to men, this helps the establishment to limit competition and turn women into servants of men at all levels.”

It should be noted that although the HDP is a pro-Kurdish party, the movement embraces all ethnicities.

Gulistan Kocyigit, an HDP parliamentarian from Mus province, told Al-Monitor how meticulously the HDP and Kurdish movement have worked over the years to create an equal representation and a support network among female political activists.

“Our establishment has been designed around trust,” Kocyigit said. “That encourages more women to participate in the political process. That is precisely what the AKP aims to block. These types of attacks signal to women, ‘Politics is not for you.’ They know and fear that women acting on their own free will are able to destroy the patriarchal system and mindset."

Kocyigit provided several examples of how Kurdish women who may have been housewives only a few years back are now at the forefront of the political process. Kocyigit also explained that although Kurdish women are specifically targeted, they are not the only ones that the larger system wants to control. “Even a white scarf my colleague [Remziye Tosun of Diyarbakir] wears to the parliament has been made an issue with the patriarchal political system,” said Kocyigit. Tosun is not a part of the political elite and she is not rich, but she made it to the parliament as a part of HDP, Kocyigit emphasized.

Huda Kaya, a HDP parliamentarian from Istanbul, told Al-Monitor, "The words against Demirtas reflect the government's perspective on women. I have also been targeted with slurs and threats. In the last weeks, the threats have intensified from calling for making us into concubines to other offensive words I will not repeat. These minds rely on the AKP's power. They know there will be no consequences, no punishment for their acts or words."

Within hours of Keskin’s interview with Al-Monitor, unknown perpetrators broke into her house to threaten her.