Threats and venomous words against Turkish women have caused an uproar among citizens but haven't drawn much of a reaction from the government. 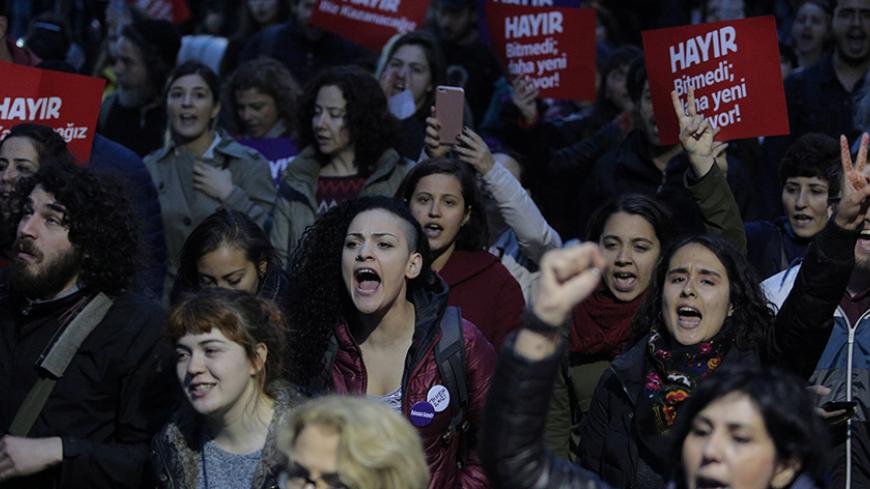 Anti-government demonstrators shout slogans during a protest in the Kadikoy district of Istanbul, April 17, 2017. - REUTERS/Kemal Aslan

There is a growing environment of fear, suspicion and anxiety on Turkish streets. Months of acrimonious campaigning ended April 16 with voters narrowly approving constitutional amendments that will greatly expand the presidency's power. Though the campaign is over, it cultivated seeds of ill will that have grown and spread, evoking hateful rhetoric against those who opposed the amendments.

Some strongly pro-government citizens are likening the campaign to war and the election's outcome to the victory of war, and even — incredibly — placing women among the spoils of war.

The week before the referendum, Istanbul City Municipality (IBB) worker Omer Akbayrak posted the following lines on his Facebook page:

“Dear Friends! The Republican People’s Party [CHP] has openly declared war and is doing all that it can [against us]. The attacks [the CHP] have started at the parliament with all their rhetoric and action now targets yes-sayers. On April 17, after we win the war, their wives and daughters are available as loot [and] as halal to [those who vote] yes.”

IBB is controlled by the ruling Justice and Development Party (AKP) and Akbayrak has since shut down his Facebook account. But this controversial post and his subsequent commentary about Islamic warfare rules and norms and women have generated an uproar in Turkey. Akbayrak ended his commentary by saying that according to Islamic law, after a war, the defeated army's women become the victors’ concubines, and he added that those details would be sorted after the victory. His post, less than five days before the referendum, generated such shock that within 48 hours an official investigation was launched against Akbayrak. He has been suspended from his position.

Although most Facebook commenters were critical of Akbayrak’s statement, quite a few applauded him as well. For example, one Twitter user wrote, “Omer Akbayrak, my brother, whose freedom of expression has been curtailed, stand straight. This nation is with you. No one speaks up against those who want to run us [yes-sayers] into the sea, but speaking about the law of war, gets one suspended.”

Several people on social media called for Akbayrak's immediate arrest. Hundreds of commenters on social media argued that the attitude he reflects is the expected result of senior leaders referring to naysayers as terrorists and traitors for weeks, and that it will only get worse.

There is also concern about the rise of radical militant Islam in Turkey. Some commenters have approached the matter with a bitter sense of humor. They ask whether Akbayrak will be joining the Islamic State (IS). Zaytung, a satirical Turkish website similar in tone to The Onion, wrote that after the Akbayrak fiasco, IBB now plans to decrease its hiring quota from among IS ranks. Despite IBB's prompt and firm action, several pessimistic tweets and posts said that, based on how previous cases of physical threats, sexual harassment and rape have been addressed, most of the public is convinced that in a few days Akbayrak will be reinstated to his position or maybe even promoted.

Akbayrak’s ferocious words are not the first nor will they be the last derogatory comments targeting women in Turkey, but they were a catalyst. Turkish women are increasingly demeaned and devalued as militarization and radicalization rises.

There is another crucial trend that is not discussed openly in Turkey. A professor of Islam and political science, who asked to remain anonymous to keep his job at a Turkish university, told Al-Monitor, “Turkish Ikhwan [Muslim Brotherhood], politically represented by the AKP, is changing fast. Ikhwan in Turkey has been rather different than its versions in Syria or Egypt in two ways: First, [Turkey's Ikhwan] never boycotted elections. However difficult the times were, they remained in the race. The harsh treatment of secularists could not dissuade Turkish Ikhwanis’ struggle for legitimacy. They were receiving only a quite small percentage of the votes from the mid-1970s until the mid-1990s, but keenly used political channels and put up a good fight within the establishment. Since the mid-1990s, they have been able to acquire a majority of municipal, and then national, elected branches and slowly they have replaced the bureaucratic cadres with men of their own Islamic views."

He continued, "Second, they have not been violent or advocated violence. We have seen the Turkish Hezbollah at the end of the 1990s who had committed extremely violent acts, but Ikhwanis have always kept themselves clean. They have not advocated or engaged in violence against society. This is changing as a consequence of the rise of authoritarianism and full-scale involvement in Syria. Turkish involvement goes beyond military intervention and it has social aspects as well. This means their understanding of Islam is resembling more radical elements, along with advocating violence.”

He was quite worried about the concubine rhetoric. “We saw photos of wives, daughters, granddaughters of prominent figures [naysayers who were courageous enough to advocate against the constitutional amendments] being displayed as halal [permissible] loot for all those who said yes, or for the believers. This is not a joke. This is the first time in Turkey that Islamists declared their fellow citizens enemies and a democratic political process [referendum] as a war and called upon believers to consider the others as losers, and punish them as losers would be punished in accordance with Islamic law.”

Not even one political figure stood up against this.

Are Akbayrak and his supporters on social media an isolated and marginal group? Or do they have wider support from silent groups as well?

Two recent events are telling in this regard. First, on April 19, a member of al-Qaeda wanted for a 2003 deadly attack in Istanbul was caught in Turkey. The suspect, whose name was kept out of the press, is a government-paid imam. Second, a well-known media figure and AKP supporter had called for the masses to be ready for another war after a victory on the referendum. Cem Kucuk appeared on television and called on Turkish President Recep Tayyip Erdogan to part ways with radical Islamists. His words were met with anger among Islamists in Turkey. Among the 30,000 Twitter comments (followed by lawsuits), several called on believers to take action. Both of these recent incidents provide clues about how deep and complex Islamist relations with the state have become in the past decade.

Turkish Ikhwan was moderate in the sense that it had not recommended violence against its own people, with the exception of alleged cases of blasphemy. On top of it, Akbayrak and the like are not challenging individual women directly. In radical Islamist rhetoric, women are seen as objects, not worthy of being considered individuals. Here, in the rhetoric of turning women into concubines, also lies the cruel wish to kill the men who dared say no, making their property, including women, the loot.

While this is the first public rhetoric about concubines in Turkey, sexual violence, particularly rape, is not new. A Kurdish female activist told Al-Monitor, “We experienced horrible treatment in Diyarbakir prison after the 1980 coup. It was systematic and brutal. However, this is different. This is out in the open. It terrorizes randomly, and its victims could be any female. This instills perpetual fear in our hearts.”

Al-Monitor asked respected senior Islamists from different religious groups about their views. It was a relief to hear that none of them condoned such words, let alone such actions. However, they had not openly disowned it; most of them said they didn't want to engage on the topic and denounce such rhetoric because it wasn't worth it.

For example, Barbaros Sansal, a prominent fashion designer and critic of the AKP, was extradited in January from Cyprus and jailed in Istanbul for months for just a few anti-AKP tweets that did not include a call for violence against individuals or groups. Sansal was attacked on social media by pro-AKP groups and physically attacked on the airport tarmac in front of cameras.

In the case of Akbayrak, there was a clear call for sexual violence against a specific group, and he has not even been taken into custody. No respected pro-AKP figure has spoken out against him. But Kucuk’s statement targeting Islamists put his life at risk. Apparently, his words were worth the engagement. How can anyone feel safe in Turkey with such hypocrisy?