With the battle over Turkey's constitutional referendum, state-paid imams have become Erdogan’s best advocates for the 'yes' campaign. 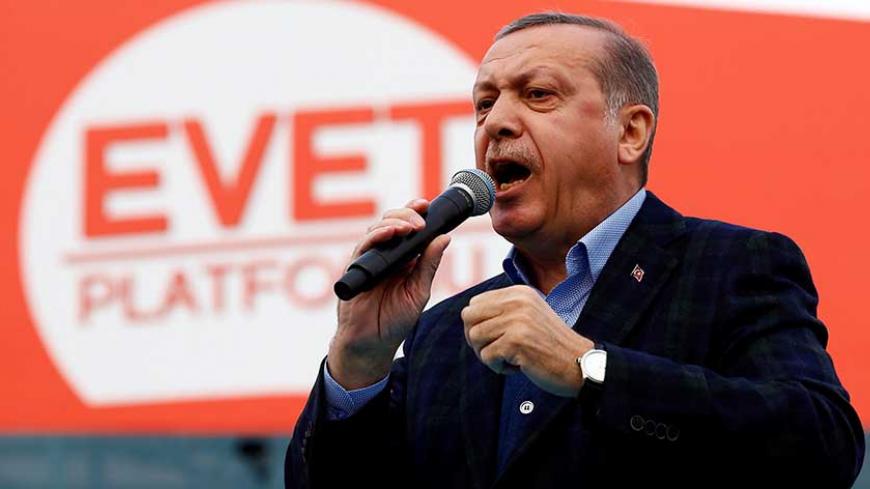 Picture this: A group of well-mannered, middle-aged men and women are traveling to the picturesque Aegean town of Ayvalik as the mosque’s loudspeakers announce, “Strangers have entered our village, do not open your doors.” Members of the secular nongovernmental organization (NGO) Ataturkist Thought Association experienced this April 4 as they approached the town to talk to the residents about the upcoming referendum. They were the ones the imam called strangers. Ahmet Uzgec, the head of the NGO, told the media that there is quite a bit of confusion among citizens. Some elderly were told that if the April 16 referendum on providing greater powers to the Turkish presidency does not pass, their retirement funds will be cut off, along with the government aid provided for the disabled.

The event in Ayvalik, where advocates of the NGO were shunned by the imam, was not an isolated incident. Not many can dispute that the mosques have become campaign centers for Erdogan’s referendum. Indeed, there are several examples, some of which were documented by opposition media outlets.

For example, on Feb. 3, Huseyin Gulec, the imam of a prominent mosque in the Umraniye district of Istanbul, was recorded by a phone camera advocating for "yes" during his Friday sermon. Umraniye has voted overwhelmingly for Islamist parties since 1994, but it is still home to rather moderate Muslims as well. Gulec told the congregation that those who oppose the presidential system are ignorant. The imam’s statements were passionately pro-government as he defended the state of the Turkish economy and warned against those criticizing the government. He cursed the naysayers, saying they were against the grandiose infrastructural successes of the Justice and Development Party (AKP), such as the third airport. However, Gulec backed down as one member of the congregation yelled, “This is a mosque and we are here to pray, but you are declaring naysayers as traitors.” Immediately, Gulec reverted back to reciting prayers in Arabic.

In Turkey, nearly all mosques — and there are almost 85,000 — are registered under Turkey’s official religious body, the Diyanet, which is currently operating under the prime minister’s office. The Diyanet has extensive human and capital resources both inside and outside Turkey. The Turkish state not only trains and pays the salaries of the imams, but also covers the expenses of the mosques. In return, the imams — who are government employees — have to follow strict government guidelines in their sermons. Imams who fail to adhere to these sermons, particularly in Kurdish areas, have been prosecuted for decades.

Al-Monitor interviewed 14 imams from Ankara and Istanbul’s conservative districts March 14-19. Imams are gently prodded to advocate for the “yes” vote, but they are also advised not to be too provocative. The Diyanet employs the carrot and stick policy on them: Imams are fearful that pro-AKP mukhtars (elected local officials) attend and report about their sermons. Those who are not supportive of the referendum efforts can be labeled as being pro-Gulen movement and punished. Others have mentioned the rewards the government provides for the good imams.

Another added that they are also competing against the alternative mosques and religious orders, saying, “Those orders get the lion’s share. We are the ones walking a tight rope. If we do not advocate for the government, we are out of a job. If we do and a member of the congregation complains about us, we are taken to court for organizing a political movement. But religious orders can do as they please without any supervision.”

Indeed, the imams’ observation about religious orders are crucial. Although these establishments are generally quite circumspect, some news reports have emerged about their efforts. For example, a video of Masum Bayraktar, a prominent figure from the Ismailaga Order, shows him telling his followers that naysayers are nonbelievers and foreigners. He used the derogatory word for foreigner, “gavur,” known for centuries to denigrate non-Muslims. Bayraktar sought solidarity among believers against the nonbelievers. He warned his followers repeatedly that if they waver, nonbelievers would take away all of their Islamic freedoms.

There are undeniable signs of concern among the Islamists. First, learning from the bleeding wounds from his battle with the Gulen movement, President Recep Tayyip Erdogan is worried about the burgeoning religious orders and subgroups. Initially, the AKP government acquired its core support from these groups by opening up space for them on social and economic fronts. However, when Gulen’s rivalry turned dangerous, Erdogan began fearing that other rivals might emerge.

Therefore, the AKP tightened its grip in social and economic arenas; 1Turkey saw the growth of Erdogan-family led NGOs, such as the Ensar Foundation or younger son’s TURGEV and younger daughter’s KADEM. Under the emergency law since August 2016, hundreds of NGOs have been shut down, along with Alevi and Shiite media outlets, while Erdogan-approved ones are flourishing.

During Al-Monitor’s interviews with the imams, another common concern was the rise of alternative mosques, known as street masjids. Although “masjid” literally means a place of worship, in Turkey it has been used differently than a mosque. For example, Friday prayers are not allowed in a masjid. However, it has become an open secret that some of these masjids are more active and popular than mosques. Local imams are worried about losing congregations to these masjids and wonder why the government allows them.

Who leads and attends these alternative services? We see that younger imams are not able to be government employees because there is a supply surplus in imams and growing unemployment overall, and these imams are against the idea of being told what to preach by the state. Their congregations are mostly young and middle-aged Turks who are dismayed by the economic difficulties, marginalized in the suburban peripheries of big cities and looking for alternative ideas to the stale government rhetoric. An attendee of a neighborhood masjid told Al-Monitor, “I am tired of hearing the same old lies on television, in the papers and at the mosque. So I come here now. Real Islam does not need the Diyanet, it is solely based on the Quran [holy book of Islam] and the hadith [words and deeds of the Prophet Muhammad], and this is how I pray. We are always asked for donations at the regular mosque; here at least I know we are supporting the imam and not some unknown cause.” When asked about his vote for the referendum, he lifted his hands up and said “Hayirlisi” — meaning “for the best,” but also including syllables of “no” in Turkish.

The Diyanet and its mosques in every small town provide an unmatched power for the government. But this is a referendum, so the weight of votes in small towns will not be as high as in local and general elections. Erdogan has lost several crucial allies during this referendum process, but the Diyanet’s imam army seems to be dedicated. In major cities, the Diyanet is losing some ground to its competitors. Erdogan, a savvy politician, is well-aware of that, and that is why a brand-new Erdogan image appeared last week: A photo of Erdogan teaching the Quran to his grandson — taken on the night of the July 15 attempted coup — is now being praised on all pro-Erdogan media outlets.