Observant Muslim women have won their struggle to access all public buildings in Turkey and will now take on the mosques. 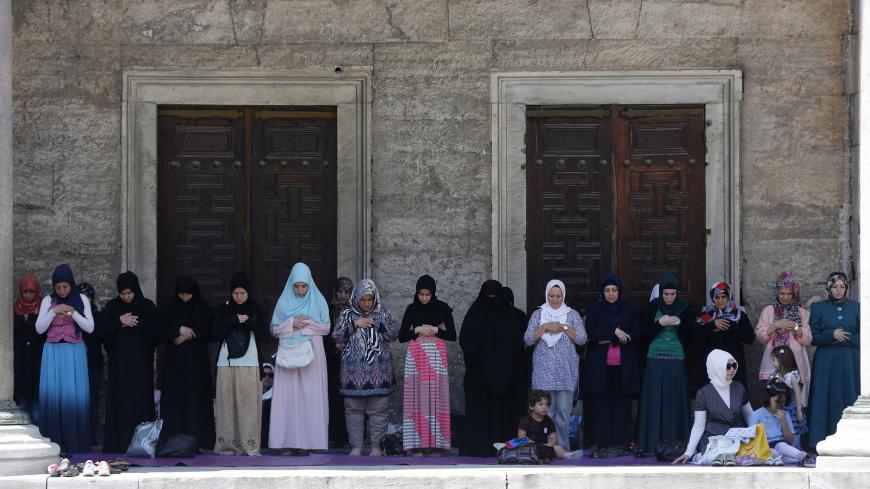 In October 2017, a group of Muslim women launched a campaign on social media called Women in Mosques with the hashtag #kadinlarcamilerde. The group announced an invitation for weekly gatherings at a mosque in Istanbul to discuss women’s access to prayer halls.

These gatherings aim to correctly diagnose the problems women face at mosques and discuss possible solutions. They highlight the most important problem as inadequate spaces reserved for women while the most unorganized and dirty spaces are wrongly seen as appropriate for women.

How women are received at mosques differs, as each mosque has a different design and size. Ideally, mosques — just like Turkish baths — should have separate entrances for men and women. In some cases, women and kids are allotted space in the balcony area where they can still see the imam and the congregation and pray under the same roof. However, as the Women in Mosques campaign has documented, that is not always the case. Sometimes the upstairs is locked or unavailable. In some instances, the stairs are so steep that it becomes a safety concern — particularly for children and the elderly.

The hardship starts from the moment women decide to pray. The bathrooms — essential for ablution prior to prayers — that are reserved for women are frequently locked or out of order in many mosques.

In several mosques, women are escorted outside and told to pray in a closeted area away from the prayer section. These areas are rarely used, frequently cold, dirty, dark and overall quite unwelcoming for any sort of prayer or meditation. The group asks for the right to pray under the same roof with men at mosques, where there are soft, clean carpets and the sermon can actually be heard. The idea of praying in the mosque is to feel part of the congregation. In some mosques, that would not be a problem.

Indeed, major cities provide quite nice bathrooms and prayer sections for women. Based on personal observations since 2012, significant improvements regarding women’s access to mosques have been made. Still, reception of female worshippers varies from one mosque to another. The photos, videos and their narratives shared on the group’s website help explain why the majority of women still prefer to pray at home.

It is indeed a vicious circle. “Because most women do not come to mosques, most mosques are not welcoming to the women,” said an imam in Ankara who gave his name as Hasan. It is quite intriguing that with hundreds of mosques named after Ottoman Sultan’s mothers, sisters, wives or daughters, these places are not worship spaces for families.

Berrin Sonmez, a scholar and an observant Muslim, expressed strong conviction that women should join in the Friday prayers — also called Salat ul Juma, the most important prayer of the week — with the congregation at mosques. Yet she and several others said women reading the Quran have been asked to leave prior to Friday prayers so that men can take over the women’s quarters for the service. Sonmez also emphasized that because of seclusion from the congregation, women in Turkey do not get to learn mosque etiquette or culture. Her insistence to join the congregation has produced different results over the years. She said that for other prayer sessions, while the mosque has only a handful of male participants, women may still be asked to leave or told to pray outside the mosque.

The Turkish Religious Affairs Directorate (Diyanet) has been launching one campaign after another to make mosques more women-friendly over the last decade. They should be applauded for encouraging women to join Friday prayers with announcements of the names of mosques that have women’s sections. Increasing the number of Muslim tourists and refugees who are accustomed to attending mosque services is also crucial in big cities.

Zehra Yilmaz, author of the 2015 book “Female Piety: The Evolution of Islamist Women’s Movement,” explains the debate about equal access to mosques between two genders. Yilmaz details in her book that while the Diyanet has been trying to make mosques more women-friendly, most religious orders in Turkey would rather not.

Members of the Women in Mosques campaign have been working diligently for the last eight months, but they did not receive the attention of society at large until April 4 via BBC programming in Turkish. The women have been organizing solidarity prayer sessions at mosques that aren't yet friendly to women. Among all of their statements, one sentence generated an uproar on social media. One of the members was quoted as saying, “We can work together [with men]; we can study together. But in the mosque, we are told to stand back.” Women are expected to pray not in front or next to men but behind them, so as not to tempt them during worship. Most of the comments were angry and inflammatory toward the campaign in the conservative media.

Al-Monitor contacted the group and asked for clarification or comment on the public reactions to this specific point. The group declined a response, stating it is not providing press releases at this time.

Hilal Kaplan, a columnist for Sabah, a Turkish daily supportive of the ruling Justice and Development Party (AKP), wrote a piece in which she concurred with the group about its grievances and said that the Diyanet could be doing more to make mosques women-friendly; however, she did not agree that demanding to pray side by side was permissible. The demand to curtail gender-based segregation is not new. In her book, Yilmaz provides an example of a member of the Muslim nongovernmental organization MAZLUMDER stating that “this kind of strict separation of genders at mosques is not needed since we cohabit all walks of life with men in public.”

Gamze Gursoy, spokeswoman on behalf of the Radical Change Journal’s women’s branch — which is affiliated with Turkey's far-right Hizb-ut Tahrir — was clear in her objection to the campaign. Gursoy agreed that the logistics issues with regard to women’s access to mosques were real, but sge said these issues are administrative and could easily be handled by the Diyanet. Gursoy told Al-Monitor, “Danger lurking behind the call for reform in Islam is serious. What will be next? Demanding female imams? Accepting same-sex relationships? Renewing rules of hijab [the Islamic dress code for women]?” Gursoy also highlighted that this campaign was against Muslim women and did not represent the majority of Muslim women. Gursoy’s views were echoed by dozens of other pious women Al-Monitor spoke with off the record. It would be safe to assume that most women in Turkey do not demand or accept coed prayer sessions.

Omer Faruk Gergerlioglu, a renowned human rights activist in Turkey, told Al-Monitor this campaign could be rather beneficial for society. Gergerlioglu said there are accounts from the first caliphs — 1,400 years ago — that women were a part of the congregation; there is a recorded instance where Caliph Omar accepts his mistake during a sermon upon the warning of a woman. Gergerlioglu emphasized that despite all the uproar on social media, the campaign is not about men and women praying next to each other but rather for both genders to have equal access to the mosques. It is refreshing to have men express solidarity on such a matter in Turkey. Gergerlioglu also conveyed his hope that the campaign will evolve into a social movement.

It is particularly important that for decades Islamist policies in Turkey had to battle a secular establishment that prohibited women with headscarves from accessing public spaces such as schools or public employment. There have been gradual yet important improvements, and today — even in the military — women are free to wear headscarves. So it is quite interesting that after years of battling for access to the public domain, women are still facing obstacles about access to mosques in a Muslim majority country.

There is hope, after all. The Women in Mosques campaign keeps growing strong, undeterred by all the misled criticism. The Diyanet is turning mosques into not only places of worship, but also into learning and sports centers for children, youth and the elderly of both genders. Another sign of hope is the soon-to-open mega mosque Camlica on one of the most impressive hills of Istanbul. Designed by female architects, it features rooms for nursing moms and sizable prayer areas within the mosque reserved for female worshippers.