The Turkiye Diyanet Foundation is restoring mosques in the Syrian province of Aleppo, recruiting preachers and teachers and providing hundreds of job opportunities. 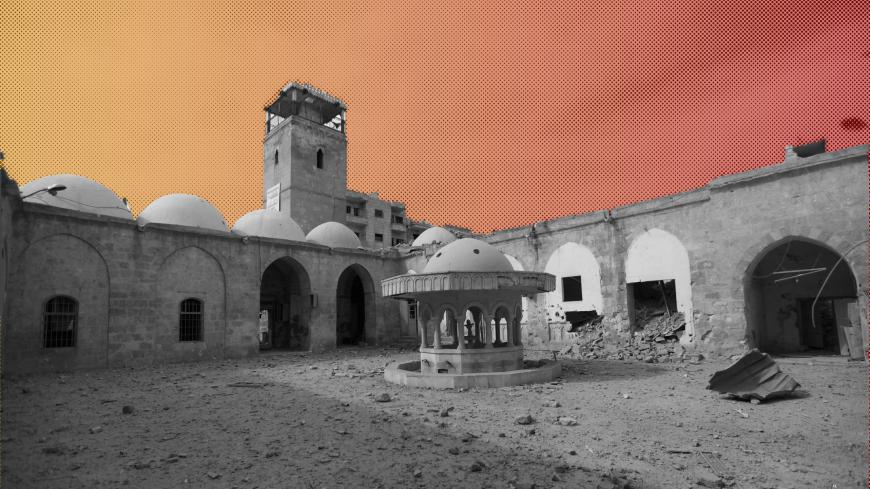 ALEPPO, Syria — A large number of mosques in Aleppo province were destroyed by fighting that raged between the Free Syrian Army (FSA), the Turkish army and the Islamic State (IS) as part of Turkey's Operation Euphrates Shield. To restore stability to the newly liberated area, the Turkiye Diyanet Foundation embarked on a mission to rebuild and renovate these mosques, to open Sharia education workshops and to provide jobs for hundreds of people.

Many mosques were destroyed by IS mines and explosives, especially in al-Bab, where IS turned some mosques into military headquarters and used the rooftops and minarets of others as sniper platforms, which drew heavy fire.

More than 66 mosques have been restored since April 1 in the main cities, including Azaz, Marea, al-Bab, Souran, al-Rai and Akhtarin. This month, workers have begun rebuilding mosques in small villages.

The Turkiye Diyanet Foundation is a Turkish religious institution affiliated with the government. It was founded in 1975 and has nearly a thousand branches in Turkey. It provides humanitarian services in 135 countries to people affected by natural disasters, wars, violence and famine, regardless of their religion, race or language. It also carries out many educational, charitable, social and cultural activities.

Sheikh Ali Mohammed, the mufti of Marea, told Al-Monitor, “As soon as the battle ended and IS was expelled from the region, officials from the Turkiye Diyanet Foundation started examining the damage suffered by the mosques. The restoration work included painting the mosques, repairing the cracks, walls and roofs, fixing the electricity networks inside the mosques, replacing old carpets with new ones, waterproofing the roofs and providing bathrooms.”

Mohammed explained that the restoration work isn't limited to the destroyed or damaged mosques but also includes mosques that had been neglected since the beginning of the Syrian revolution and that required services such as water, along with furniture, paint and other necessities that were not available due to lack of funding.

“The main goal behind the rehabilitation and restoration of these mosques is to attract residents, strengthen their faith and prompt them to attend seminars held therein," Mohammed said. "The aim is to spread the correct Islamic principles that are devoid of any impurities and that are full of tolerance and love, to expel extremist and strange ideas that IS promoted when it controlled large areas of the countryside of Aleppo."

The Turkiye Diyanet Foundation also recruited 500 preachers, imams and muezzins (who conduct the calls to prayer) and has paid their monthly salaries since June. Islamic scholars of the area warmly welcomed the move, as they hadn't been paid since 2012, when the regime lost control of the province. They relied on some donations from the FSA and local residents. Now, preachers and imams receive $150 (500 Turkish liras) a month, while muezzins are paid $120.

Since the beginning of June, religious education seminars have been held in these mosques for boys and girls aged 8 to 15. The teachers had to take an admissions test, and 1,000 were accepted. Al-Monitor attended several Islamic education sessions held in Marea during the summer and noted they attracted a large turnout of more than 2,000 students in the city alone. There were about 150 teachers.

Hisham Abbas, who works at Omar Ibn al-Khattab Mosque in Marea, told Al-Monitor, “I have been working as a Quran teacher since June. I get a monthly salary of 300 Turkish liras [$90]. The Turkiye Diyanet Foundation pays my salary and the salaries of hundreds of Sharia and Islamic education teachers."

The foundation is developing the public services and religious facilities in cooperation with Syrian opposition Islamic institutions, such as the Syrian Scholar’s Association and the Syrian Islamic Council, in a bid to help the area recover.