Store owners at a market in al-Bab have reopened their shops, which were heavily damaged in the fight against the Islamic State. 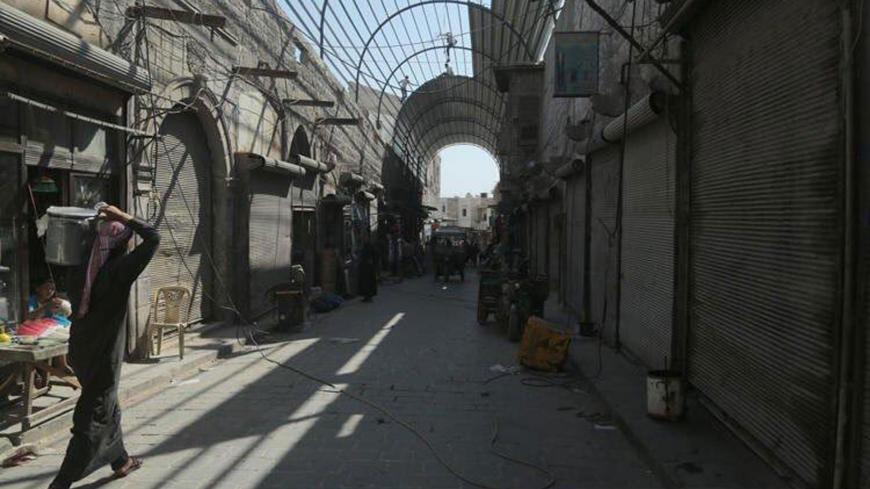 ALEPPO, Syria — Business activity is resuming at the old market in al-Bab, as shopkeepers opened their doors to customers Oct. 31 for the first time in two years.

The market, in Aleppo province’s northeastern countryside, suffered large-scale destruction during the battles waged by the Free Syrian Army (FSA) and the Turkish army against the Islamic State. The battles began in November 2016 and ended in February 2017 when the FSA took control of the city. Although the Turkey-backed FSA has held the city since then, most of the shops in the covered marketplace remained closed because of the extent of the damage.

Over the summer, owners started repairing their shops, building new ceilings over the market at their own expense and preserving the original designs. The shopkeepers used the same rocks, stones and building materials, to maintain the market’s historical identity.

Al-Monitor visited the market, where shops on both sides of the street now open their doors to hundreds of shoppers every day. The marketplace includes several sections, including a tailors’ area where traditional clothes worn by the elderly in al-Bab and Aleppo province are made. In the western part of the market are herb stores and shoe repair shops. The carpenters’ section includes a number of shops that sell wooden products used in agriculture, cooking and other work. There are also different areas where vendors sell women's clothing, meat and locally made foodstuffs. The prices are reasonable: A traditional men’s outfit costs about 23,000 Syrian pounds (around $45). One could also buy a herbal weight loss mix for 2,500 pounds (about $5).

The covered market is characterized by its predominantly Ottoman-inspired architecture. While the roofs of the shops are arched, some have wooden ceilings and clay is used to build walls. The walkway through the marketplace is some 2½ meters (about 8 feet) wide. In October, shopkeepers paid to renovate that corridor, covering it using wooden girders and iron boards to make it easier for shoppers to get around throughout the seasons.

Even though the market is lively, business hasn't recovered yet to its previous level.

Mustafa Abo, owner of a home appliances shop, told Al-Monitor, “The commercial activity resumed after the market was renovated; however, the demand isn't high. The residents of the rural areas in the southern part of al-Bab and Aleppo’s eastern countryside can't reach [al-Bab] as they are under regime control. Troops ban residents from coming to the FSA-held areas in Aleppo’s countryside.”

Al-Monitor toured a large shop where space heaters and their accessories are made. A heater can be bought there for about 15,000 Syrian pounds ($29). Its owner, Mohammad Koussa, told Al-Monitor the market was built almost 150 years ago under Ottoman rule.

"My grandfather Hajj Mohammad Koussa owned this shop 100 years ago. The shop was repaired as parts of the ceiling were damaged. We tried to conduct a meticulous restoration to keep its historic design," he said.

In the western part of the market, the smell of wild herbs pervades the air.

Mohammed Issa al-Miskan sells medicinal herbs. His shop draws people from several FSA-held cities and towns in rural Aleppo. “I make mixtures of herbs to treat several diseases, such as infertility, skin diseases, degenerative disc disease and joint pain. There are people who can't afford getting treatment at hospitals, so they resort to alternative medicine," he told Al-Monitor.