An armed group affiliated with the Turkey-backed Free Syrian Army stormed a house in the city of al-Bab belonging to a police officer after one of their drug shipments was confiscated. 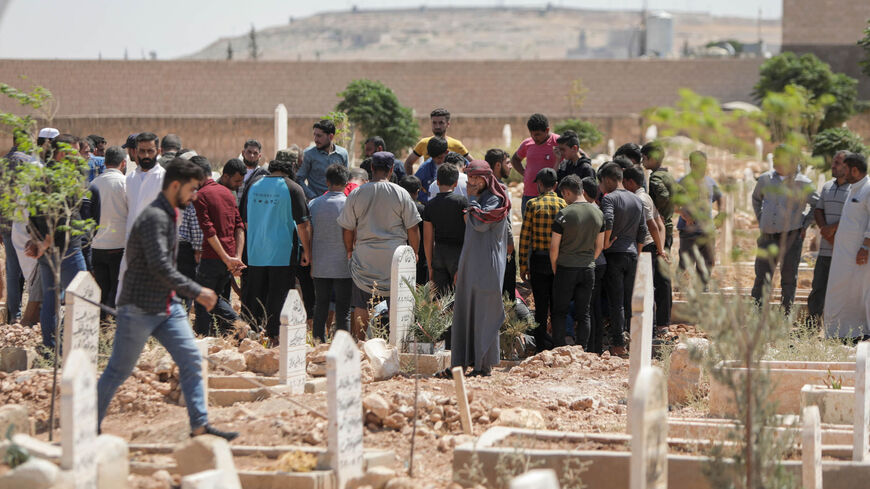 Mourners take part in a funeral of people killed in reported artillery fire by Syrian government forces, in the opposition-held city of al-Bab, on the border with Turkey in the northern Aleppo province, Syria, Aug. 19, 2022. - Bakr Alkasem/AFP via Getty Images

ALEPPO, Syria — Tension has escalated in recent days in al-Bab city in Aleppo’s eastern countryside after a group of armed men belonging to the Hamza Division, affiliated with the Turkish-backed Free Syrian Army (FSA), raided the home of an official from the narcotics division of the police forces and national general security, also backed by Turkey.

The Sept. 13 raid raised popular anger and sparked angry protests in the streets of al-Bab, with some protesters burning tires and demanding that the aggressors and the group they belong to, which is known for drug trade in the area, be held accountable.

Muhammad Ghanoum, a journalist based in al-Bab, told Al-Monitor, “An armed group led by Abu Abdo al-Qadri, a prominent leader of the FSA’s Hamza Division, stormed Sept. 13 the house of Sohaib Abu Kasha, an officer of the police’s narcotics division of al-Bab city.”

He said, “The group brutally stormed the house before searching it and breaking some furniture, terrifying children and women who were inside the house at the time of the attack. One of the aggressors confiscated the cellphone of Abu Kasha’s wife and went through it. Before they left the house, another one of the aggressors told the wife that they broke into the house in retaliation for her husband confiscating a shipment of narcotics.”

Ghanoum added, “The aggressors took advantage of the absence of Abu Kasha who was at work on the outskirts of the city of al-Bab [on the day of the attack]. All those who stormed the house were drunk, and apparently some of them do drugs.”

Speaking to Al-Monitor on condition of anonymity, one of Abu Kasha’s relatives said, “The armed gang affiliated with the Hamza Division is known locally in al-Bab for its drug trafficking operations and has a really bad reputation. Their brutal storming of the house was shocking and trespassing and violation toward its owners.”

He noted, “The armed gang wanted to take revenge on my relative, Abu Kasha, because a few weeks ago he had confiscated a shipment of narcotics and hashish belonging to this gang. Since then, Abu Kasha has received threats and they finally carried out their threat by storming his house and terrorizing his family members, his wife, children and his elderly mother.”

The news about the raid quickly circulated in al-Bab, igniting protests that called for the arrest of the aggressors. The FSA’s military police indeed arrested four members of the group, including Qadri. Photos of the detainees circulated in the media after their hair was completely shaved.

Muhammad Abu Rashid, an official in the FSA’s military police in the city of al-Bab, told Al-Monitor, “The people involved in storming the house of Abu Kasha were arrested and imprisoned before they will be transferred to the military judiciary where they will be prosecuted.”

Abu Rashid denied the reports about clashes with the Hamza Division over the arrest of those involved in the raid. “Some protesters gathered in the vicinity of the [military police] building and some of them fired in the air, while the police did not respond to the shooting. Things did not escalate into clashes or exchange of fire,” he said.

Since the beginning of 2022, the FSA factions have been leading a crackdown against drug dealers and smugglers in different parts of Aleppo’s countryside.

In June, Hayat Thaeroon for Liberation, a formation that includes several Turkish-backed FSA factions, posted a video in which two people accused of drug trafficking and of cooperating with Lebanon’s Hezbollah movement in the countryside of Aleppo confessed about their drug trafficking activities and their ties with a Hezbollah member who provides them with narcotics from Shiite-majority towns of Nubl and al-Zahraa in Aleppo’s countryside.

According to the recording, Hayat Thaeroon for Liberation also confiscated 50 kilograms (110 pounds) of narcotic pills and hashish bags that were in the possession of the detained.

Another drug bust occurred in May in the city of Marea, in the northern countryside of Aleppo, and resulted in the arrest of dozens of drug dealers, according to local media networks close to the FSA.

In November 2021, the military police raided a drug manufacturing factory in the Afrin countryside. This was the first drug factory to be raided in the FSA-held areas in Aleppo countryside.

Two leading members of the FSA were accused of running the factory, which was funded by their relatives who are based in Turkey and hold Turkish citizenship.

In mid-June, the FSA-affiliated Third Legion identified and raided a second drug manufacturing factory near Azaz.

In light of this and the recent incident, it seems a standoff is brewing between the police’s narcotics division and some groups and leaders of the FSA who are involved in the drug trade, manufacture, and promotion.

Yet still, it seems the police operations remain limited to civilians involved in the drug trade, who are not supported by the FSA factions. Meanwhile, high-level drug traders and manufacturers are protected by armed factions and are rarely arrested. Some believe that Qadri, a leader of the Hamza Division, would not have been arrested recently if his men did not attack Abu Kasha’s house.

Although he was arrested by the military police — in response to the popular anger — many expect Qadri and his gang to be released soon, with no consequences.