The Turkish-backed Free Syrian Army is reportedly cracking down on drug dealers in the Aleppo countryside. 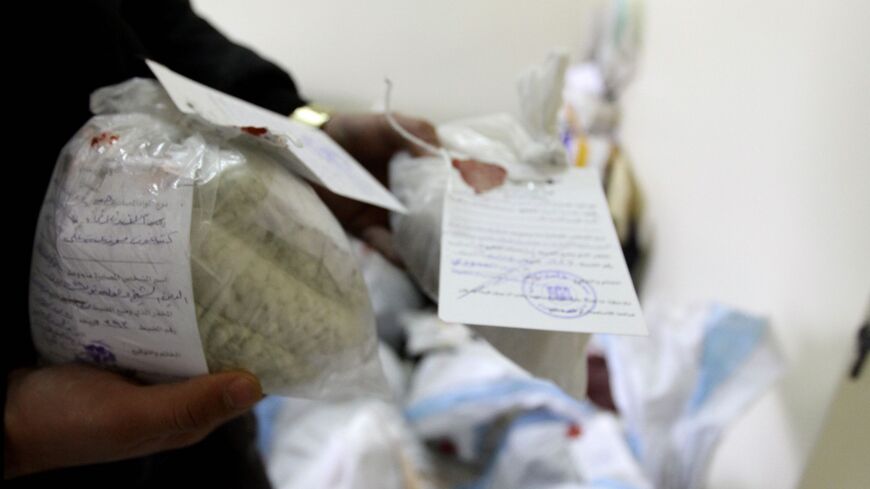 ALEPPO, Syria — The Turkish-backed Free Syrian Army factions have stepped up their security operations in the northwestern countryside of Aleppo against drug trafficking networks, arresting several dealers and seizing large quantities of narcotics.

On Oct. 12, the FSA-affiliated Syrian Liberation Front announced that it had arrested several drug dealers and seized about half a million Captagon pills. On Twitter, the front said that in coordination with the military police, its security apparatus had launched a crackdown on drug dealers in the city of al-Bab in the northwestern countryside of Aleppo and destroyed the drugs.

The Syrian Liberation Front tweeted Oct. 1, “The security apparatus, in coordination with the military police, has cracked down on drug dealers in the Jindires area in the countryside of Afrin. Mohammed Youssef and Mohammed Darmoush have been arrested in possession of 10,000 Captagon pills, a Kalashnikov rifle and ammunition.”

Despite the efforts of the opposition’s security institutions and the FSA factions to stop the drug trade in opposition-controlled areas of the Aleppo countryside, there has been a marked increase in the number of users of narcotic pills and hashish.

The security forces often arrest small drug dealers while major ones operate freely thanks to their ties with FSA leaders.

Mustafa Sejari, head of the Syrian Liberation Front’s political bureau, told Al-Monitor, “Some local parties in cooperation with foreign ones have turned Syria into an arena for drug trade and manufacturing and some gangs in northwest Syria have become partners in these networks. We are working to combat these gangs and their crimes.”

He added, “We are deploying a secret security network whose mission is to search for supply sources and sales points for narcotic substances and pursue any party that may be linked to the main factory or financier. We have deployed dozens of secret security agents in all FSA-controlled areas in the countryside of Aleppo. We have caught several drug trafficking networks and dozens of individuals involved in drug trafficking and transportation for the Bashar al-Assad regime and Iranian militias, as well as for the People's Protection Units.”

Sejari noted, “Most of the networks are working to transport drugs toward Turkey through northern Syria, and we have arrested some gangs that distribute drug pills for free for FSA members in an attempt to infiltrate the ranks of the FSA. We have tightened our grip around such criminals and we are constantly working on fighting such crimes. We will double down on efforts in this regard and will cooperate seriously with the police to uncover more drug trafficking groups and dealers.”

On Oct. 3, the FSA's military police, in coordination with the Azm Operations Room (which is made up of a number of the Turkish-backed FSA factions), discovered a drug factory in the village of Burj Abdalo in the countryside of Afrin and arrested several workers there.

On Oct. 1, the Azaz Security Directorate in the countryside of Aleppo destroyed 530,000 Captagon pills seized during an operation carried out a day earlier by the Intelligence Division.

On Sept. 20, the directorate announced that it had arrested two drug dealers in the area and seized 2,420 Captagon pills and other types of narcotic pills.

During the months of September and July, the directorate carried out several security operations, arrested many drug dealers and users and confiscated pills and other narcotics such as hashish.

Farouk Abu Bakr, a member of the leadership of the Syrian Liberation Front, told Al-Monitor, “The front is determined to fight drug trafficking in opposition areas in the countryside of Aleppo, and it coordinates with the rest of the factions and with the military and civilian police in the area to pursue drug trafficking networks. The front also helped discover the drug factory in Afrin by coordinating with the factions and the security forces.”

On Oct. 11, US lawmakers voted in favor of a resolution related to an amendment that requires a joint strategy to disrupt drug networks in Syria and stated that the US government is concerned about drug trafficking from Syria.

A study by the Center for Operational Analysis and Research published in April revealed that Syria is a global center for the production of Captagon and that production has become sophisticated and technologically advanced. It put the value of Syria’s exports of Captagon in 2020 at $3.46 billion.

According to an investigation published by the Organized Crime and Corruption Reporting Project in June, the drug trade is booming in Syria.