The internal fighting among FSA factions and the ambitions of Hayat Tahrir al-Sham to expand its control in the northwest of Syria did not prevent the Turkish-backed FSA factions from continuing their security operations to crack down on Islamic State cells in the countryside of Aleppo. 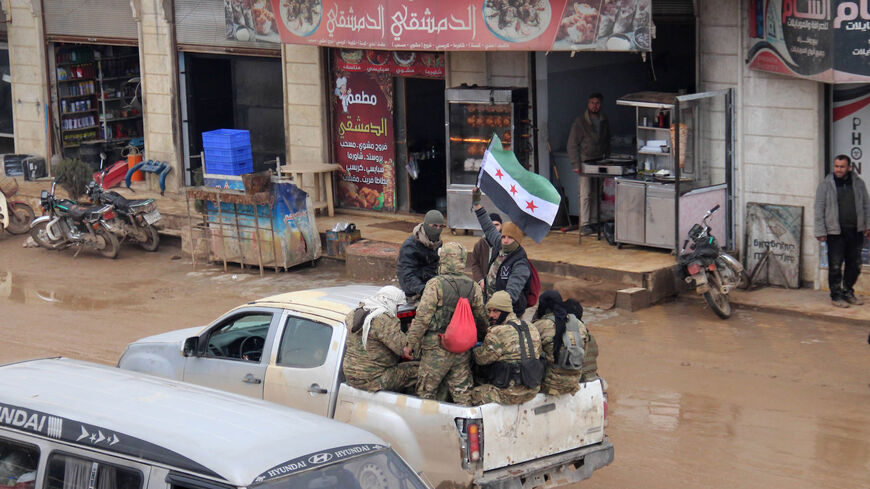 ALEPPO, Syria — The Turkish-backed Free Syrian Army (FSA) continues to crack down on Islamic State (IS) cells in Aleppo countryside in northwestern Syria, where tension and security chaos have flared in the past weeks due to the infighting between several factions and Hayat Tahror al-Sham’s (HTS) incursion into Afrin before quickly withdrawing.

HTS yields great influence in Idlib and does not hide its ambitions to expand at the expense of the FSA in Aleppo countryside.

HTS appears to have its sights set on Afrin.

On June 24, the city of al-Bab in the northeastern countryside of Aleppo saw violent clashes between the FSA-affiliated military police and IS militants, which killed one policeman and injured several others. Two IS members were arrested.

Jalal Talawi, a journalist based in the city of al-Bab, told Al-Monitor, “The FSA military police — in cooperation with the opposition’s civilian police forces — cracked down on an IS cell in the city. The clashes between the two sides extended to several neighborhoods in the city.”

He said, “The clashes dragged on for several hours before IS fighters holed up in civilian buildings. The police were able to catch one fighter who ran out of ammunition. The fate of the remaining operatives is still unknown, but they probably were able to escape."

Col. Ahmed al-Kurdia, a commander with the FSA military police, told Al-Monitor, “The security operation against IS operatives in the city of al-Bab was carried out successfully, and we were able to successfully investigate with the person who was arrested,” without disclosing further information about the detainee.

On June 20, the FSA-affiliated Third Legion arrested several operatives of an IS cell in the northern countryside of Aleppo, including Hassan Diab, Mohammed Abdel Rahman al-Faraj, Mohammad Mahmoud Fayeq Kino, and Abdel Salam al-Ali, who confessed to carrying out assassination operations and planting roadside bombs in the area.

Siraj al-Din Omar, head of the media office of the Third Legion, told Al-Monitor, “Over the past week we carried out extensive campaigns against IS cells in the countryside of Aleppo. These fighters pose a threat to the lives and properties of residents. We have worked so hard to dismantle the cells and pursue their members.”

He said, “IS operatives detonated three explosive devices in the city of Jarablus, as well as a bicycle bomb in front of the Kabso restaurant in the city of Afrin, and a car bomb in the city of al-Bab. They also assassinated several people, one of whom was an arms dealer and another who works in the opposition police forces."

Omar noted, “On Oct. 3, 2021, the Third Legion published confessions of one of the most dangerous cells affiliated with IS, whose members confessed to carrying out more than 30 bombing and assassination operations in the northern countryside of Aleppo.”

On May 30, in the countryside of Aleppo, the FSA-affiliated Hayat Thaeroon for Liberation arrested Qassim Muhammad al-Hassan, aka Abu Awad al-Tadmiri, who is the former commander of the IS inghimasiyoun unit (“forlorn hope” or suicide attack shock troops), and responsible for the financial guarantees for IS women.

Despite the FSA’s security campaigns and crackdown on IS cells in the countryside of Aleppo, the group is still active and continues to carry out sporadic terrorist operations.

A security commander at the FSA told Al-Monitor on condition of anonymity, “IS is taking advantage of poverty and unemployment among young people in the liberated areas to recruit them to carry out bombings and assassinations in exchange for sums of money, sometimes amounting to $200 for each operation.”

He noted, “IS operatives also enter the liberated areas through smuggling corridors that are widely spread along the contact lines with the Syrian regime and the Syrian Democratic Forces in Aleppo countryside."

Amid security and military tensions flaring in the FSA-controlled areas, HTS sent June 20 military reinforcements to several villages in the countryside of Afrin, including military vehicles, medium and light weapons, as well as tens of fighters stationed in the villages of Basoufan, Faftertin, Burj Haidar and Kabashin, southwest of Afrin.

HTS also took control of several military checkpoints in the area after the FSA-affiliated Sham Legion fighters withdrew from them.

HTS tried to take advantage of the infighting between the FSA’s Third Legion and the Eastern Sector of Ahrar al-Sham movement, in a bid to set foot in the area under the pretext of preventing clashes, trying to portray its intervention as a popular demand, according to a statement issued June 22 by the Third Legion.

HTS’ military convoys, accompanied by groups affiliated with Ahrar al-Sham, have indeed arrived in Afrin from Idlib on the evening of June 18 — a move that was described by the opposition’s Syrian Islamic Council as an HTS aggression on the area.

On June 21, Afrin witnessed a demonstration against HTS’ arrival into the area.

On the same day, the Third Legion reached an agreement with HTS whereby the latter would pull out from the area.

On June 22, there was another deal to stop the fighting with Ahrar al-Sham and to restore the previous map of control between the two sides.

“HTS withdrew all its military convoys from the Afrin area, north of Aleppo, and from the villages of Kabashin, Basoufan and Burj Haidar, returning to the previous status quo with the same map of control,” an HTS military official told Al-Monitor on condition of anonymity.