Infighting continues among the Turkish-backed Free Syrian Army factions in light of a power and influence struggle, conflict over crossings and smuggling corridors, and the lack of a unified military institution. 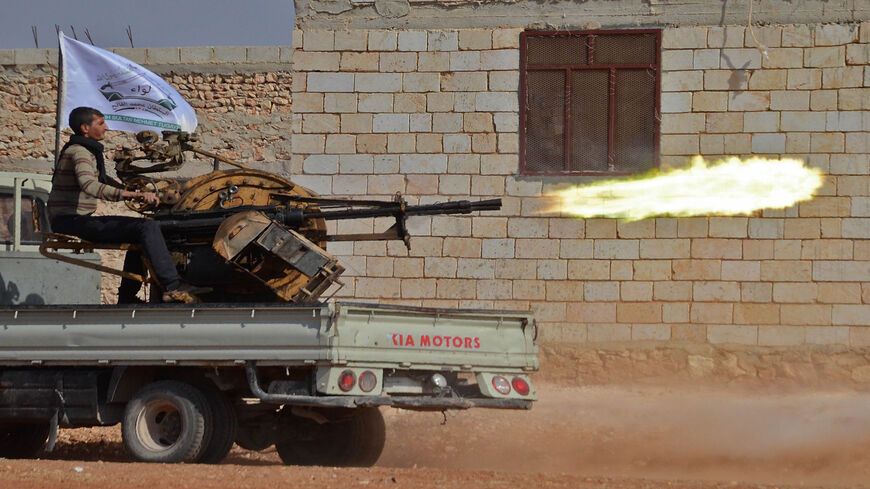 A fighter from the Free Syrian Army fires an anti-aircraft machine gun mounted on a vehicle deployed during fighting against the Islamic State near the northern village of Beraan, north of the embattled city of Aleppo, Syria, Oct. 24, 2016. - Nazeer al-Khatib/AFP via Getty Images

ALEPPO, Syria — Clashes and confrontations are taking place almost daily between the armed factions in the areas controlled by the Turkish-backed Free Syrian Army (FSA) in northern Syria. The instability ensuing from the infighting often take place inside cities and towns and between their residential neighborhoods, mainly in the cities of Jarablus, al-Bab, Afrin, Ras al-Ain, Azaz and others, has made their residents fearful.

On April 5, similar confrontations flared up between members of Faylaq al-Sham in the town of Maidanki, in the countryside of Afrin.

Meanwhile, various weapons, medium and heavy machine guns and mortars are being used in these confrontations.

Obeida Hayyan, a journalist who resides in the city of Afrin, told Al-Monitor, “The clashes between FSA factions occur almost daily in the city of Afrin and its countryside for various reasons, such as individual disputes between members of different factions in case of a traffic accident for instance. Any friction can quickly turn into an armed clash engaging several faction members.”

He said, “Many confrontations and clashes start out with a dispute between two individuals from different factions. This dispute culminates into a fight and a wide-scale armed clash. The problem is that these clashes are erupting in residential neighborhoods and civilians are getting injured. There is a chaotic proliferation of arms amid the absence of any deterrent punishment to prevent faction members from using their weapons inside residential neighborhoods.”

However, it seems that the causes of the infighting between the FSA factions are more complex. Some of the confrontations are due to the struggle over power, influence and crossings.

On April 1, violent clashes erupted in the village of Awlan, near the city of al-Bab in the eastern countryside of Aleppo, between armed groups affiliated with the Third Corps of the FSA, after one of the groups tried to defect from the military formation. The clashes resulted in the death of one member and the injury of a number of others. Also, main roads were blocked and a fire erupted at a gas station. The teams of the Syrian Civil Defense, known as the White Helmets, had difficulty entering the area to put out the fire.

Tensions persisted in Awlan for several days, and the other FSA factions were under a state of alert and tried to intervene to reach a truce, such as the newly established Hayat Thaeroon for Liberation (Uprising for the Liberation) and Jaish as-Sharqiyah, both affiliated with the FSA.

Meanwhile, a protest was staged in the city of al-Bab calling for an end of the infighting to spare bloodshed and in observance of the sanctity of the Muslim holy month of Ramadan. Protesters raised banners bearing slogans that read “internal fighting is a betrayal of the revolution,” and others calling on faction leaders to stop the clashes. A third banner read, “The blood of the revolution’s youth is too precious to be shed in infighting.”

Journalist Adnan Faisal was in the Awlan area near al-Bab when the clashes broke out between the members of the Third Corps. He told Al-Monitor, “This is so sad. This phenomenon has emerged since the establishment of the FSA in 2012, and is still ongoing. Instead of firing bullets at the Assad regime forces, FSA members are killing each other.”

Faisal explained that these clashes are attributed to several factors, most notably “the absence of an effective role for the unified military command of the FSA represented by the Ministry of Defense of the [Syrian opposition’s so-called] interim government. This ministry has only a proforma and the minister and ministry officers have no power to impose penalties to prevent the infighting.”

He noted that these clashes do not last long, since the dignitaries of the factions rush to put an end to them and resolve the dispute.

Writer and political activist Basil Maarawi, who lives in the countryside of Aleppo, told Al-Monitor, “The Syrian National Army [SNA] of the FSA does not have the components of a real army; rather it is a group of several factions that are not merged into one entity with a military hierarchy, institutions and ideology. These factions were supposed to be united under one umbrella [when the SNA was formed in 2017], unfortunately this is not the case.”

He explained that the low salaries offered to the faction members and the lack of funding for the factions by the Turkish government pushed these factions to compete and fight each other to secure other sources of funding. “For instance FSA factions compete over smuggling crossings that are widely spread along the lines of contact between the areas controlled by the Syrian regime and those controlled by the Syrian Democratic Forces. Such crossings generate huge funds that enable the faction that controls them to cover the expenses of its members. I believe this is the main reason for the infighting,” Maarawi said.

It may also be argued that these factions are fighting over power and expansion of influence, as they are attempting to control sources of funding such as crossings and smuggling corridors. Other reasons can be traced back to the weakness of the official military institution affiliated with the interim government. The latter’s Ministry of Defense has been unable to bring under its command the FSA components. Moreover, the ministry does not control the payment of the salaries of FSA fighters, and does not have the budget to do so.

An FSA commander in Aleppo countryside told Al-Monitor on condition of anonymity, “The countries that support the Syrian revolution and the FSA want to sustain the infighting and competition between the factions. They want the state of instability to continue. They do not want to see a unified and organized opposition army under the umbrella of the Ministry of Defense. Such a military institution will hinder any vision of a solution that these countries want to formulate.”