Islamic State cells in the areas under the Turkey-backed Free Syrian Army in the countryside of Aleppo have escalated operations following the killing of a senior IS official and his colleague during a raid on their hideout in the city of al-Bab. 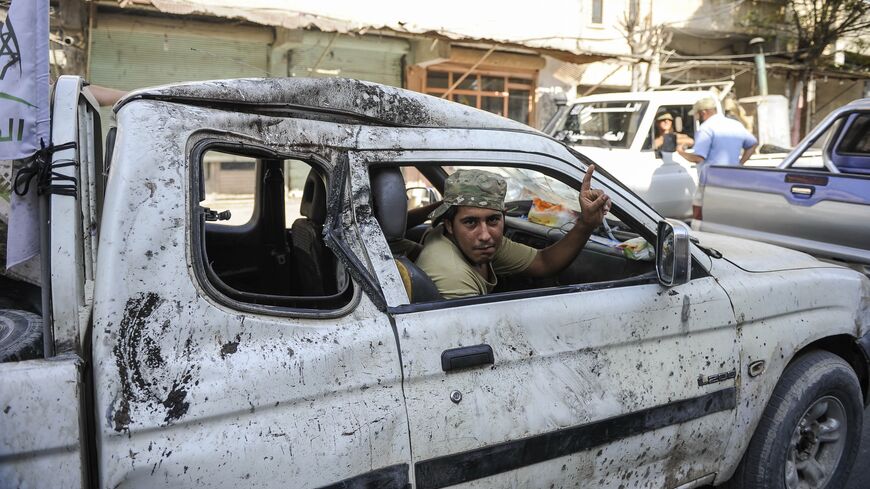 A member of the Turkish-backed Free Syrian Army (FSA) patrols in the border town of Jarablus, Syria, on Aug. 31, 2016, after the town was taken from the Islamic State. - Defne Karadeniz/Getty Images

ALEPPO, Syria — Areas are controlled by the Turkish-backed Free Syrian Army (FSA) factions in the countryside of Aleppo in northwest Syria are suffering from security chaos due to an escalation of violence, assassination attempts and bombings, mostly at the hands of groups affiliated with the Islamic State (IS).

On June 5, four explosive devices exploded in the city of Jarablus, near the Turkish border, northeast of Aleppo. The Syrian Civil Defense (White Helmets) said in a Facebook post, “Four IEDs [improvised explosive devices] exploded in the evening of Saturday, June 5, in the city of Jarablus in the eastern countryside of Aleppo, two of which were detonated in a car, and two others in two cars, causing one of the vehicles to burn down. Our teams secured the premises immediately. Only material damages were recorded.”

“Since the beginning of the year, the Syrian Civil Defense has responded to more than 106 incidents of car bombs and IED explosions in northwestern Syria, in which 51 people were killed, including eight children and four women, and 177 people were wounded,” the statement added.

On June 2, a car bomb exploded in Jarablus, wounding three people, including two children. On May 30, Talal Abou, a judge in the city of al-Bab in the northeastern countryside of Aleppo, survived an assassination attempt in the city center, when an IED was detonated in his vehicle.

On May 30, two members of the opposition-affiliated police were killed and one wounded in al-Bab in a gunbattle with masked individuals.

“The perpetrators of the attack on the police were two men on a motorbike. When they opened fire, they shouted slogans in support of IS and said they would take revenge on infidels and renegades,” a man from the city of al-Bab told Al-Monitor on condition of anonymity.

Commenting on the May 30 shooting incident, Khaled Abu al-Majd, a journalist in al-Bab, told Al-Monitor, “The two gunmen were riding a motorbike and opened fire at three policemen on Zamzam Street in the city center, killing two of them, Mohammad Matar and Abdel Qader al-Zein, while a third one, Mohammad Qasham, was wounded. The gunmen then fled the scene.”

“On the same day, judge Talal Abou survived an assassination attempt by car bomb. Luckily, he was not in his vehicle when it detonated,” Majd added.

Attacks against police have been recurrent in al-Bab during the months of April and May.

The shooting followed a joint military campaign launched by FSA and police forces in al-Bab in cooperation with the police of the city of Azaz, in the countryside of Aleppo.

As part of this campaign, the police forces raided a house serving as an IS cell in al-Bab on May 28. The FSA announced the death of a senior IS leader in charge of killing operations in the city and the deaths of three FSA members and other members of the police during clashes with IS members.

The FSA said in a statement, “After observation and reconnaissance on the part of the National Security Forces and the police in the city of Azaz and in coordination with the al-Bab police and the [FSA-affiliated] Syrian National Army, two IS members were arrested. Then the security forces raided one of the terrorist dens in al-Bab. In the clashes that lasted for over an hour, two people were martyred, one from the Syrian National Army and the other from the police. Seven others were wounded.”

The statement said the raid that targeted an IS “den” resulted in the death of the group’s man in charge of operations to kill people in al-Bab. Another IS member blew himself up with an explosive belt.

Abu al-Majd said, “The police forces and the Syrian National Army in al-Bab carried out a security operation targeting two terrorist members holed up in a house on al-Raheb Street in the city center.”

“Both IS members were killed, in addition to two people from the security forces, i.e., the FSA and the police, including Hamoud al-Sheikh and Abdel Jaber Hakim. Others were wounded. The security forces destroyed the explosives remnants that were seized in the hideout,” he added.

On May 31, the Military Information Unit of the FSA announced the downing of a booby-trapped drone in the city of Azaz.

“The military police in Azaz downed a booby-trapped drone that was targeting the house of Hisham Darballah, the military police’s head in the city of Azaz, in northern Aleppo,” the Military Information Unit said in a statement.

Abdel Qader Haj Othman, the director of the Azaz Media Office, told Al-Monitor, “This was the first time that a booby-trapped drone was used in an assassination attempt against opposition figures in the Aleppo countryside. This reflects a development in the terrorist cells’ methods and bombing techniques.”

“It was not determined which party specifically carried out this attempt, but the incident coincided with a crackdown on IS operatives in al-Bab and comes in light of an uptick in car bombs and explosions in the area, which are usually carried out by IS operatives,” Othman added.

Raafat Junaid, head of the FSA’s Military Information Unit, told Al-Monitor, “The engineering battalion in the Syrian National Army, which is specialized in dismantling explosive devices planted by terrorist cells, in working relentlessly to try to limit the damage of IEDs, as many operations have been preempted so far.”