The local council in Azaz has prohibited civilians and armed forces from wearing masks and other face coverings in an attempt to make it harder to evade identification when committing a crime. 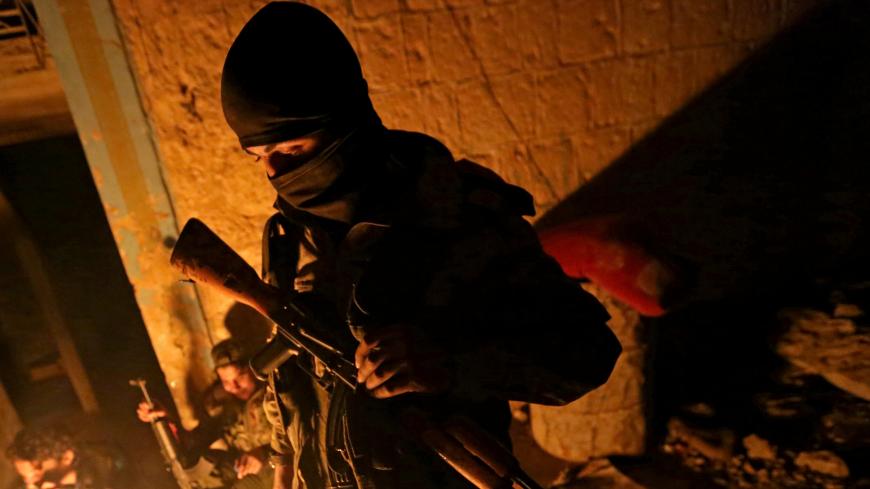 ALEPPO, Syria — Officials in Azaz, Aleppo province, recently announced a new policy designed to counter rising crime. Said Akach, media director of Azaz's local council, told Al-Monitor, “We made the decision to ban wearing masks for security reasons, because of the increasing security incidents, assassinations, crimes and thefts, not to mention car explosions, bombings and motorcycle explosions, that are targeting residential neighborhoods, crowded markets in Azaz and villages in the countryside.”

Akach further explained that the rule applies to military personnel, civilians, civil and military police, and customs and security forces in the city. The council also ordered surveillance cameras installed in official districts and on most main streets.

People covering their face with a piece of cloth or a kaffiyeh took root in Syria in the early days of the Syrian revolution in 2011, when peaceful protesters sought to hide their identity from government security forces. From there, the practice spread to the ranks of the opposition Free Syrian Army (FSA) when the rebellion entered its armed phase. Members of extremist groups, such as those who joined the Islamic State, also adopted the practice of hiding their faces.

Mohammad Kinno, an Azaz resident, told Al-Monitor, “It's a huge mistake for FSA members to wear masks because they're giving criminals the chance to hide. A masked person can do anything without fear of being identified. Criminals, agents, government-affiliated security cell members and the Kurdish People’s Protection Units are increasingly adopting this method in [the province] to hide their identity.”

FSA-affiliated security forces, in particular the Northern Storm Brigade, and police began enforcing the ban Aug. 1, deploying joint security patrols. “[They] roam the streets to make sure the decision is being implemented and to arrest violators, even if they are FSA members,” Akach said.

Yusuf Hamoud, a spokesman in the province for the FSA-affiliated National Army (Al-Jaish al-Watani), told Al-Monitor, “Face masks are dangerous, and criminals and terrorists wear them when carrying out bombings. We refuse to allow a masked presence among civilians, and we forbid military men affiliated with the FSA to wear masks. Whoever disobeys orders will be punished. The National Army command, the military police and the civil police forces are coordinating to curb this phenomenon … to reduce crime and expose the terrorists and culprits easily.”

On June 2, a car exploded in the Azaz market, killing 14 civilians, including four children, and wounding dozens of others. Someone also attempted to bomb the car of the local council head in Akhtarin on June 25, and a motorcycle exploded June 22 in al-Bab. Police and security forces in Aleppo province with close ties to Turkey accuse regime agents, IS sleeper cells and Kurds of carrying out such attacks.

Although the opposition’s National Police and Public Security Forces are deployed in all areas of northern and eastern Aleppo province, they have been unable to make a dent in crime or bombings. More often than not, the perpetrators escape because they remain unknown, even with surveillance cameras, thanks to their masks.

The local council in Jarablus began banning face coverings in March, after assassinations by masked men with silenced weapons. The council’s legal committee stated at the time, “Wearing masks is forbidden, and nobody has the right to hide his face for any reason in Jarablus and its countryside.”