The local councils in the Euphrates Shield area in Aleppo’s countryside issued successive decisions banning citizens from traveling to areas under the regime’s control, for fear that the regime might infiltrate into FSA-controlled areas. 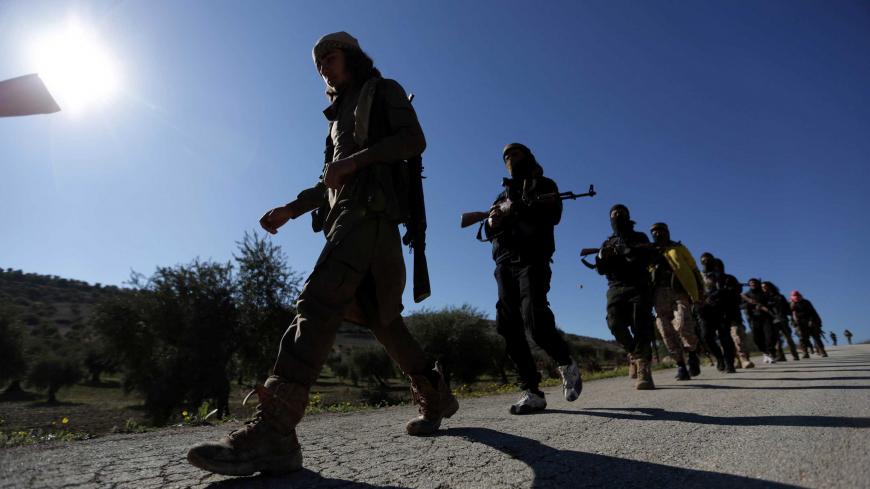 ALEPPO, Syria — A number of local councils in the Euphrates Shield area in Aleppo’s northern countryside issued decisions between Sept. 15 and Sept. 18 prohibiting residents there who are affiliated with the Free Syrian Army (FSA) from traveling to regime-held areas. Patients and the elderly would only be allowed to go to these areas in extreme humanitarian cases, with travel permits granted by local councils.

The local councils justified these decisions by saying that a travel ban is a necessary step to maintain security in the Euphrates Shield area, to stop the regime’s attempts to destabilize the FSA-controlled areas through pro-regime residents promoting reconciliation.

The councils’ decisions failed to include detailed information on the procedures to obtain a travel permit or the course of action to punish violators. So far, no permits have been issued.

Marea’s local council issued its decision Sept. 15, noting, “Given the current security situation and in order to control security in the liberated areas, travel to regime-controlled areas is prohibited except in extreme humanitarian cases and with a permit.”

Before the decisions were made, over 100 people from Marea alone traveled to regime-held areas on a weekly basis, but none went there after the travel ban. Even for humanitarian cases, residents are still waiting for further clarification on the decision and the process to receive travel permits.

Other local councils in the area issued similar decisions: Akhtarin on Sept. 16; Suran, Dabiq and Kufra on Sept. 17; and Ihtaimlat on Sept. 18.

Head of Dabiq’s local council Mohammad Jamal Hamidi told Al-Monitor, “This decision aims to control security and stability in the Euphrates Shield area. The humanitarian cases — such as patients and the elderly — are exempt from the ban, but they have to obtain a travel permit from the local council to reach regime-held areas.”

Hamidi added, “We believe this is a necessary measure in order to put an end to bombings and assassinations in the area that some individuals might be carrying out to serve the regime. The travel ban will prevent such individuals from meeting with the regime’s security forces and coordinate with them to create chaos in FSA-affiliated areas. We want to prevent any activity aiming at promoting reconciliation with the regime in our FSA-held areas.”

On Sept. 16, a motorcycle exploded in Jarablus in the Euphrates Shield area, injuring eight civilians. A car bomb had exploded near the local council of Azaz on Sept. 1, killing and injuring a number of civilians. FSA factions accuse the regime and its informants in the area of being behind such attacks.

Media activist Abdel Fattah al-Hussein told Al-Monitor, “The local council’s decision to ban travel came after the Baath Party’s branch in Aleppo asked its members residing in FSA-controlled areas to carry out activities in favor of the regime. These instructions were given on Aug. 22 and were followed by secret activities of party members and individuals working for the regime.”

He said, “The party’s secret statement read, 'Party comrades in Aleppo and its countryside, we urge you to send lists of party members in areas controlled by terrorists and work on activating them and keeping us informed of all developments.'”

Hussein explained that retired employees from FSA-controlled areas heading to the banks in regime-held areas to receive their pensions are asked to get a prior approval from the Baath Party’s security division, as per the regime’s instructions. As a condition to receive their pension, “the security division asks those retirees to write periodic reports about developments in FSA-controlled areas and specify military spots. In addition they are instructed to promote reconciliation there. The banks are not allowed to hand over pensions without a written approval from the Baath Party’s security division,” he added.

Head of Akhtarin’s local council Khaled Deebo told Al-Monitor, “The travel ban is necessary at this critical stage. Strict measures must be taken against people living in FSA-controlled areas who promote surrendering to the regime. The travel ban is a successful step in the right direction. Other actions might follow during the coming period.”

Hassan Mari, the head of Kufra’s local council, told Al-Monitor that the travel ban will prevent the regime from taking advantage of people who go to the areas it controls to receive their pension. According to him, it gives them an ultimatum: They either work for the regime and receive pensions or are arrested for refusing to cooperate with security forces.

The regime issued a decree in March 2017 requiring retired employees in opposition-held areas to go to the institution they used to work for in regime-held areas in order to receive their monthly pensions, or they would not receive the money.

Mari noted that this is the reason why they do not want residents of the Euphrates Shield area to fall in this trap, explaining that they do not want them to be treated this way nor be forced to work for the regime.

In a separate development, Akhtarin’s military council launched a crackdown against pro-regime residents. After meeting with revolutionary forces in the area, the military council issued Sept. 13 a decision to start deporting all those working for the regime's forces to regime-held areas. However, the decision has yet to be implemented.

FSA factions in Idlib and Aleppo’s countryside had cracked down on pro-regime residents and reconciliation promoters, arresting dozens between mid-August and mid-September.

Mohammad Khalaf, 60, told Al-Monitor, “I am a retired employee and I need to pick up my pension from regime-controlled areas every month. The travel ban prevents me from getting my money, which is the only source I have to cover the cost of living. Local councils have to find us an alternative. I need this money so my family and I can survive.”