Syrian regime says it's time for the displaced to return

Hundreds of people displaced from al-Waer neighborhood in Homs, Syria, have now left the Zoghra camp outside of Aleppo and returned to the regime-controlled Homs. 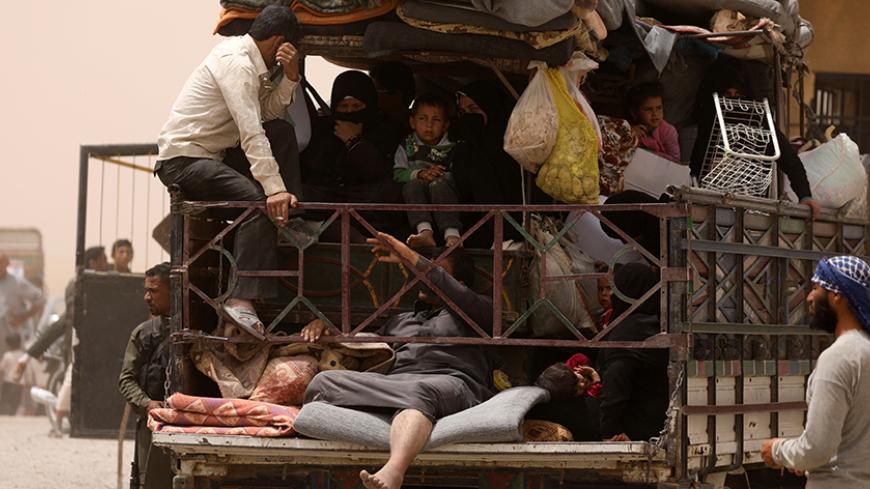 Internally displaced people who fled Raqqa ride a vehicle with their belongings in a camp near Ain Issa, Syria, May 19, 2017. - REUTERS/Rodi Said

NORTHERN ALEPPO COUNTRYSIDE, Syria — The Syrian government is working to lure displaced residents back to regime-controlled areas, even as the opposition hopes to keep that from happening.

Among those originally displaced from Homs' al-Waer neighborhood, 574 people, or nearly a hundred families, came back July 10 to the regime-held city. They had left the Zoghra camp, which is near Jarablus in the Operation Euphrates Shield area in the northeastern Aleppo countryside — namely the areas the operation liberated from the Islamic State. A few hours after their arrival in Homs, the regime allowed the displaced to return to their houses once they were searched and their names checked on the list of returnees.

Darar al-Homsi, who was displaced from al-Waer, accompanied the returnees from the camp to the military crossing between the Free Syrian Army (FSA) and the regime forces south of al-Bab, before he returned to the camp. He told Al-Monitor that the convoy consisted of 1,000 people protected by a Turkish military force to the entrance of the regime-held areas. Homsi added, “574 people reached their destination, while the rest of the families changed their minds before arriving at the crossing between the regime and FSA. This is after the FSA militants managed to convince them to stay and promised to provide better services at the camp.”

Homsi said, “Those willing to return [to Homs] have had their names registered at the Zoghra camp since early June, more than a month before the convoy departed. From the beginning, the whole process took place with the knowledge of the Turkish officials in the Euphrates Shield area, which is a Turkish area of influence.”

The deteriorating situation at the Zoghra camp, where more than 7,500 displaced al-Waer residents live, drove some families back to Homs only a few months after they had reached the FSA-controlled Euphrates Shield area. They returned in groups from March 18 until May 22.

Since the Turkish government's Disaster and Emergency Management Authority (AFAD) established the camp in March, the site has lacked sufficient accommodations — even the most basic services such as health care, water, electricity and food. Also, the high temperatures in the tents, which lack thermal insulation fabric, were unbearable for many.

The FSA militants, along with their families, originally moved from al-Waer to northern Aleppo during the regime’s ongoing siege and the increased shelling that preceded the Russian-brokered settlement reached March 13 between both sides.

The regime is trying to take advantage of the families’ return to al-Waer and other areas they fled to show that everything is normal in areas under its control, as the economy and security deteriorates in opposition-held areas, particularly in the Operation Euphrates Shield's camps in rural Aleppo province.

Judy Arsh, a media activist displaced from al-Waer to the Euphrates Shield area, said the government has established rules for those who return.

“The regime stated clearly that if a family wishes to return home, all its members, as registered in the family register, must return together. The regime also said it will not be responsible for moving the families' belongings [and refuses] to send the necessary trucks and pickups for transferring luggage and belongings. In other words, the families will have to pay all the related expenses," Arsh told Al-Monitor.

However, the pro-regime figures who negotiated the citizens' return to al-Waer promised that the regime will facilitate the arrival of defectors and those who had avoided militarily service. She said that is the regime's attempt to exploit the return of al-Waer's people in the media and for the regime to be viewed as the strong ruler that cares for the people.

Once people heard that the regime was not arresting families who returned to al-Waer, more of them felt encouraged to make the trip. "More have registered their names and decided to return," Arsh said. "Another batch of more than 1,000 displaced, nearly 200 families in the same camp, has been preparing to return to al-Waer," but the FSA and Turkish forces have delayed it.

In parallel, the AFAD, along with the FSA factions in the Euphrates Shield area, have been trying since early July to provide additional services to improve living conditions in the Zoghra camp to convince people to stay, no matter how tempting the regime’s offers are.

Arsh confirmed that services are improving at Zoghra.

"Medical clinics were started in the camp, water is regularly supplied, there were repairs in the sewerage network and … AFAD distributed food parcels to the displaced. The camp, however, needs permanent care and additional services, and torn tents need to be replaced with new ones. The situation has improved in general in the camp, which has become favorable for the people," Arsh said.

In cooperation with Turkish governmental and nongovernmental organizations, the Jarablus local council has been trying to provide more services in the Zoghra camp so the displaced will settle in the area. The local council launched a primary school July 25 and promised to open complementary and secondary schools.