After a deal was struck between the Syrian regime and opposition forces in the al-Waer neighborhood of Homs, waves of newly displaced are headed for Jarablus, al-Bab and Idlib. 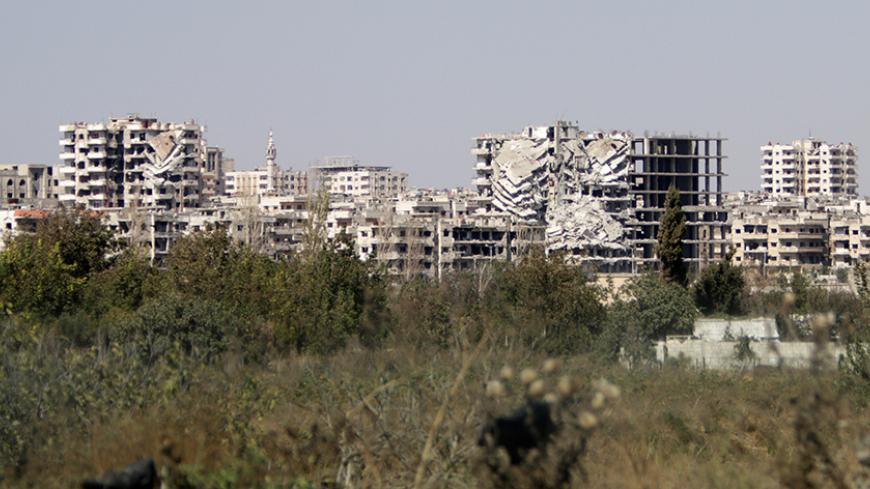 A general view shows damaged buildings in the al-Waer district in the central city of Homs, Syria, Sept. 19, 2016. - REUTERS/Omar Sanadiki

ISTANBUL — On April 9, the fourth batch of evacuees left the besieged al-Waer neighborhood in Homs, northern Syria. The group headed for the city of Jarablus, which has been controlled by opposition factions since its liberation from the Islamic State (IS).

Batches of civilians and fighters continue to evacuate al-Waer under the Russian-brokered deal between the neighborhood committee and the regime on March 13. The “reconciliation deal,” as the Syrian regime calls it, calls for a halt in military hostilities against the neighborhood and the evacuation of opposition fighters to other opposition-held areas. Homs was the epicenter of the revolution during the first year of the rebellion and saw numerous uprisings since the outbreak of the rebellion.

On March 18, scores of opposition fighters and their families left the neighborhood for the city of Jarablus, which is controlled by the Turkish-backed Free Syrian Army factions fighting IS under the banner of Operation Euphrates Shield.

On March 27, the second batch of evacuees reached the city of al-Bab, which is also controlled by opposition factions affiliated with the Turkish-backed Euphrates Shield.

Al-Waer resident Ousama Abou Zaid spoke to Al-Monitor via Skype about the exodus from the last opposition-held enclave in Homs. He said, “The Russian threat to al-Waer's negotiating committee, composed of civilians and military personnel, forced opposition fighters to leave. The neighborhood’s residents feared they would face a fate similar to that of the eastern neighborhoods of Aleppo if the neighborhood committee rejected the agreement offered by the Russians. They had no other choice but to accept the settlement whereby opposition fighters and their families and any resident who wanted to leave would vacate the neighborhood. We expect 15,000 people to leave, and this means that only the elderly and children will remain, as others fear they will be arrested when the regime breaks into the neighborhood.”

The regime warned that young fighters who stayed in the neighborhood would risk conscription or arrest by the Syrian army and security services.

Around 1,500 evacuees arrived in al-Bab on March 19, but found no camp ready to host them. Many Syrian opposition figures were angered by what they believe was a failure by humanitarian organizations to properly appreciate the suffering of the displaced from al-Waer who had held their land for six years.

Some activists reported that residents of al-Bab and Jarablus were renting tents to the displaced for high fees of up to $300 a month and requiring six months' payment in advance.

Issa Al-Ahmad told Al-Monitor from Jarablus over the phone, “There may have been similar complaints from individuals. They exploited the critical situation of the evacuees and the lack of preparation and offered tents or houses with some equipment for rent in order to reap profits. But the next morning humanitarian associations were on the field preparing a camp for the evacuees.”

He added, “Yes, there was clear negligence and failure in terms of preparations for the arrival of the convoy of displaced persons. This is due to several reasons, including the absence of international organizations and the limited number of organizations operating in the region, which are limited to organizations working in coordination with the Turks, such as the Turkish Humanitarian Relief Foundation and the Turkish Red Crescent.”

The residents of the city have been cut off from moving to Syria's northern areas near the Turkish border and have been besieged for years by the regime.

Khaled Al-Omar, a father of three who left the neighborhood with his family during the fourth round of evacuations on April 9, told Al-Monitor over the phone, “We did not expect this treatment. The committee overseeing the evacuation of al-Waer told us that we would be staying in ready-made homes and that everything would be safe from the moment we arrived. But to our surprise, we found nothing. We spent our first night out in the open and some of us slept on the buses. The next day, we received tents and started setting them up ourselves. I asked the supervisors to bring me back with my family to al-Waer, but they refused, saying that it was not possible. I would rather stay in my house and face the shelling and bombardment instead of seeing my children stranded like this. We were baffled by this careless treatment, as the cities of Jarablus and al-Bab are safe and close to the Turkish border, which should have made it easy to bring in all the equipment necessary for the preparation of camps or prefabricated houses.”

The third batch of 1,500 evacuees, including 400 fighters, left al-Waer for Idlib.

The fourth batch of 1,424 people headed toward Jarablus under similar circumstances. They also complained of a lack of preparations for their arrival.

Hassan al-Asmar, an activist from Homs who left the neighborhood in the fourth group, told Al-Monitor, “Turkish organizations are trying to improve the situation in Zogora refugee camp in Jarablus by replacing small tents with caravans, but the camp is still far below the standards of safety or human dignity. However, civilians still prefer heading to Jarablus instead of Idlib, where a chemical attack was carried out on April 4, fearing the bombing and the battles there.

“Those who rented houses outside the camps in Jarablus are comfortable,” he added.

Thousands of al-Waer residents are still expected to leave for destinations that have yet to be determined. Then the city of Homs will be under the full control of the Syrian regime.