How sports became means of defiance in Syria's besieged al-Waer

Al-Waer district, one of the last rebel-held areas of Homs, has suffered under a regime siege for years, pushing its residents to demonstrate their determination to endure. 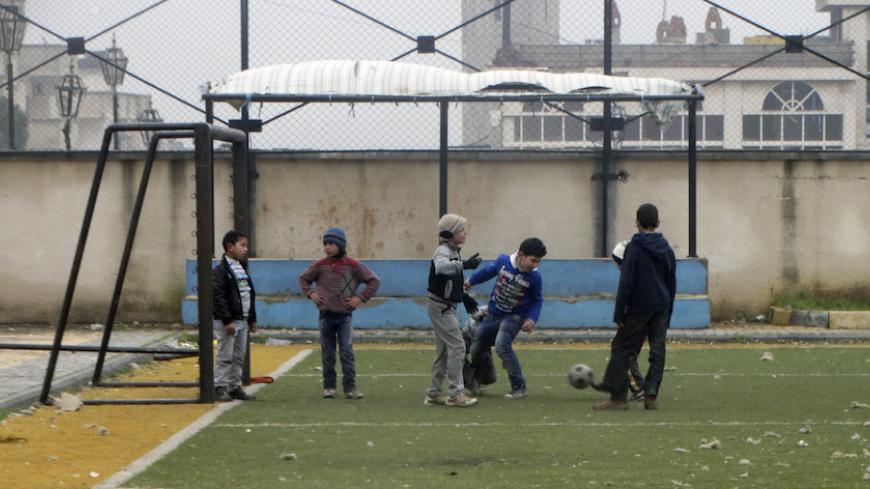 Children play soccer at a playground in the northwestern Homs district of al-Waer, Jan. 17, 2015. - REUTERS

The Assi River and orchards surrounding the river separate al-Waer district, a northwestern suburb of Homs, from the city. Despite its proximity to strategic sites such as the military academy, the military hospital and Homs’ refinery, the district was considered a paradise and a summer destination.

But when the Syrian revolution began in 2011, the repression and brutality of the Syrian regime forced many residents from other Homs neighborhoods to flee to al-Waer, at one point bringing together nearly 300,000 displaced people, in addition to the district's 50,000 original residents. Al-Waer became the last opposition-held area of the city.

The regime began tightening the noose around al-Waer, even using missiles and explosive cylinders. Regime snipers shot civilians, and the regime ultimately besieged al-Waer in mid-2015, preventing people from moving in and out. The regime also blocked supplies of medicine and baby formula. Only small amounts of supplies enter, infrequently, through the United Nations — barely enough for 5% of the district's needs.

Al-Monitor met some of the residents in al-Waer recently to ask about the educational and civil situations. Najwa Um Ziad, an al-Waer schoolteacher, said, “The number of students in the district of al-Waer is declining significantly, as more students are dropping out for long periods due to the military regime campaigns.”

Those students who do attend class feel the war's psychological repercussions. "Students dread bombing, missiles and aircraft, and this affects their concentration during classes,” she added.

Maher Abu Muhannad, who moved to al-Waer with his family from the Bab al-Sebaa district in Homs, told Al-Monitor, “The blockade has caused major physical and psychological problems for my family. Almost none of their needs can be met because of the blockade, and all I can give them is the aid provided by the UN from time to time.”

Muhannad said the war sometimes makes him feel like a failure as a parent. “When I see my children dream of a chocolate bar — in such moments, I wish I was not their father. How can I be their father if I cannot even buy them a chocolate bar?” he asked.

In such times of oppression, people seek out vestiges of normalcy. In al-Waer, some have turned to sports, despite their lack of nourishment. Athletes in the district managed to form a sports committee in July 2015 affiliated with the General Authority for Youth and Sports in Syria, a civic anti-regime sports organization.

These people, including soccer referee Abdul Aziz Dalati, have organized two al-Waer Sports Festivals under the auspices of the general authority, which was founded in 2014. The second festival ran from late May to early June. A large number of residents and children participated in a variety of sports including basketball, volleyball, martial arts, gymnastics, track and others.

Dalati told Al-Monitor, “My dream was very simple: to become an international Syrian referee and receive an international badge in arbitration from the international [soccer] federation [FIFA]. The blockade is the greatest obstacle to this dream. Syrians within the besieged regions are denied all the necessities of life.”

He added, “It is true that this blockade prevented us from achieving our sports dream, but it made us help the children and rookie athletes to pursue their training and move forward to be able to complete the journey and make it to the podium."

The festivals are symbols of defiance.

“The ​​festivals came about for two reasons," Dalati said. "The first is to breathe new life into the Syrian revolution through revolutionary festivals, and the second is to give athletes the opportunity to test their abilities and join strong competitions and tournaments in various sports that can be practiced under the siege. These festivals are a way to challenge the regime and prove that, despite the worst humanitarian conditions and the bombardment, we can manage to organize festivals and tournaments.”

The al-Waer district is still considered one of the most important strongholds of the Syrian revolution in Homs. The district is now witnessing a cease-fire in Syria, declared by the international community on Dec. 30. Meanwhile, its residents still dream of better conditions and the entry of aid agreed upon with the UN to maintain their right to life and a decent living. The last aid convoy entered al-Waer in September, and the population of the district currently amounts to 100,000 amid the ongoing blockade.