Syrian war has reshaped Ramadan for many

Since the Syrian regime lost control of Idlib in 2015, the city has become a melting pot of Ramadan traditions, as residents and refugees adapt to new lives. 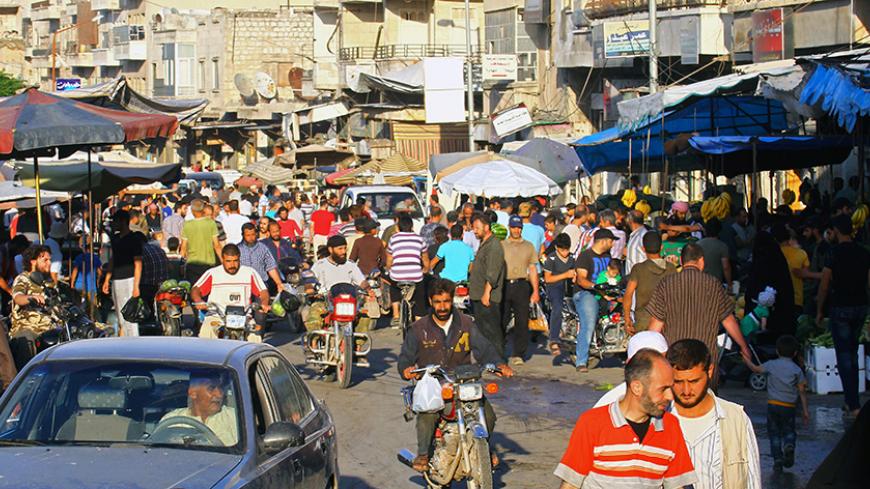 Syria is living through its seventh Ramadan since the 2011 revolution. This year, however, many aspects are different, as a major part of the country has been destroyed and major demographic changes have been brought about by large waves of displaced people and the emigration of millions of Syrians. In many families, at least one of their members has been killed, arrested or abducted, and this affects the daily Ramadan rituals.

The northwest Syrian city of Idlib, which serves as a refuge for many civilians and opposition fighters, is now inhabited by Syrians who have been gradually displaced from Rif Dimashq, Homs and Aleppo and who came to live with the city’s native residents.

The regime lost control of Idlib in March 2015, and moderate and extremist opposition factions now control the city. The city no longer receives water or electrical services previously provided by the regime, and though a truce has been reached, Idlib bears the scars of repeated shelling. Now that several years have passed since the regime lost control there, people have learned to cope with the new lifestyle. New customs, including new Ramadan rituals, have emerged.

During Ramadan, Muslims pray more than they usually do. They visit each other much more often and do more charity work. And while people have maintained their religious rituals, there are social habits that changed because of the war. The lack of government-provided utilities and cleaning services has affected evening Ramadan feasts, as well as suhoor, an early meal Muslim families eat before fasting begins.

Mohammed Ahmad, a journalist from Homs’ al-Waer neighborhood, is currently based in Idlib. He told Al-Monitor that the displaced newcomers brought along their own customs and traditions. “Now that we live in Idlib, we miss Homs’ Ramadan spirit, the decorations, the festivities and the busy markets. And since Homs’ residents take their ideas and customs wherever they go, they are now rolling out the Homs folk culture in Idlib, as they sing folkloric songs from Homs on the streets and spread the Homs culinary delights across the Idlib markets amid high demand. Also, some of those who came from Homs opened their own shops in Idlib.”

Ramadan feasts offer a variety of dishes, some of which are specifically for Ramadan, such as certain sweets and licorice syrup. These feasts bring the family together.

Abdel Karim al-Bayoosh, a photographer in Idlib city, told Al-Monitor, “There isn't one family in Idlib that has not lost at least one of its members. Some of those were either killed by the shelling or in battles waged over the past six years. Others are still detained in regime or opposition prisons, while others left the city to fight elsewhere and cannot return now that borders have changed and some areas have been besieged."

He noted that the city is calm now because of the truce, reached May 4 in Astana, Kazakhstan, "which breathed new life into the streets of a city that was on its deathbed.”

The economic situation in Idlib differs among social classes. Some families are well off, with an income generated by business projects or from foreign relief organizations. Other families have a middle income and live by trading or have jobs that pay low salaries in Syrian pounds.

The humanitarian situation in the city is stable because of the truce, which involves four different areas in Syria: Idlib, Damascus’ Ghouta, the northern countryside of Homs and part of Daraa province. The pact is scheduled to remain in force for six months.

"The commodity prices in Idlib are relatively acceptable, and while there are well-off families, there are other families living with the bare minimum," Bayoosh said. However, "The families living below the poverty line are very few. During Ramadan, humanitarian [groups] organize a great many charitable activities, and rich people distribute food to the poor. Goods are widely available on the market, and most of them are imported from Turkey, with prices constantly changing depending on the import and transportation fees, as well as oil prices. Vegetables and meat, however, are from local farms.”

Although the majority of Idlib is Muslim, dozens of Christian families lived there, and hundreds of families lived in the countryside. There are also several Druze villages in rural Idlib. They all took part in Ramadan with Muslims as a social ritual.

However, a Christian resident of Idlib who fled the city after the opposition took control of it in March 2015 told Al-Monitor on condition of anonymity that the battles and the spread of extremists in the city made life impossible there. “We stayed in the city up until it was liberated from the Syrian regime forces. However, the chaos that ensued, the spread of Sharia courts and the presence of foreign extremists made life impossible there. A Christian father and his son were executed on March 30, 2015, in Idlib for owning a liquor store, and this prompted several minorities to feel the heat.”

As a result of the cultural differences, Ramadan can differ from one city to another in Syria. Ramadan is celebrated in opposition areas differently from regime areas, where a kind of censorship is imposed by the regime intelligence force on mosques, as the Syrian revolution started in mosques. Religious slogans are also restricted, especially in Damascus.

Neveen al-Dalati, a presenter at Radio al-Kull, told Al-Monitor, “The regime has imposed tightened security measures at mosques in Damascus, and there are a lot of cases where people visiting mosques were arrested for no apparent reason. Such measures were less strict before 2011, but Damascus has turned into an army barracks in the past few years.”