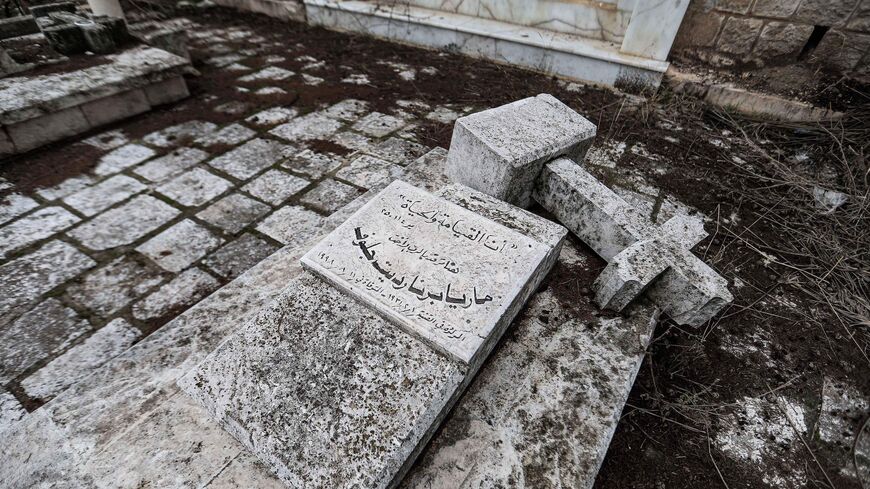 This picture taken on Dec. 27, 2021, shows a view of a broken tombstone at the Roman Catholic monastery area in the town of Qunaya, in the western countryside of Syria's rebel-held northwestern Idlib province. - AAREF WATAD/AFP via Getty Images

Hayat Tahrir al-Sham (HTS) leader Abu Mohammed al-Golani continues his public appearances to promote his image as a leader who cares about the inhabitants of Syria’s northwestern province of Idlib, more recently meeting up with a Christian community.

On July 19, the HTS-affiliated Amjad Media Foundation published a photo of a meeting between Golani and a group of Christians from the Christian villages of Qunaya, Yacubiyeh and al-Jadida in the Jisr al-Shughur countryside in northwestern Idlib.

Media sources in Idlib told Al-Monitor that the people of those villages demanded Golani give them back the many Christian-owned properties that Jabhat al-Nusra (HTS's precursor) seized in 2015.

The sources noted that Golani agreed to form a committee to review such requests and give Christians back their lands, orchards and shops.

Hana Yacoub, a Christian currently living in the Netherlands who used an alias to protect his family back in Qunaya, told Al-Monitor, “Christians were subjected to pressure from jihadist groups when they took control of Idlib in 2015 as well as in 2014. Their properties were seized and used as war money or so-called ‘Nasara’ money. The word 'Nasara' (which refers to Christians) is considered an insult to Christians.”

He added, “Many jihadists, foreigners and even Syrians have taken over many homes belonging to Christians who fled the area. They have lived in these homes with their families without asking for anyone’s approval. Sometimes, jihadis would take over homes even with their owners still living in them, knowing they could not do anything to stop them.”

He continued, “Christians are also not allowed to ring church bells or hold religious ceremonies, and many cases of kidnapping, extortion and threats against Christians have been recorded, which prompted most young men and women and even middle-aged people to leave those villages out of fear for their lives.”

Yacoub noted, “Recently, there has been a slight improvement in the treatment of Christians. This meeting (with Golani) is a sign of improvement since the Christian figures who met Golani asked for their properties back and he promised them to do so. The coming days will show whether or not Golani is serious about changing HTS's policy toward Christians.”

The opposition-affiliated Syria TV website reported back in February 2021 that about 10,000 Christians lived in Idlib province before 2012, according to unofficial local statistics. They were distributed in the villages of Yacubiyeh, Qunaya, al-Jadida, al-Ghassaniyah and Halouz in the western countryside of Idlib, as well as in the cities of Jisr al-Shughur and Idlib. However, their numbers began to decline in the Idlib countryside at the end of 2012, and most of the Christian residents of Idlib city left in 2015 after the jihadi-led Jaish al-Fatah took control of the city.

Syria TV’s report stated, “The harassment operations are ongoing against Christians in Idlib, as HTS forces them to perform their religious rites only inside the church hall and without ringing bells or raising crosses,” noting that several Christians have also been kidnapped for ransom and sometimes tortured, raped and killed.

Meanwhile, a journalist close to HTS told Al-Monitor on condition of anonymity, “There has recently been a clear improvement in HTS’ policy toward Christians. They are now allowed to practice their religious rituals, and there is a just judiciary within HTS that does justice to all. When problems arise between Christians and Muslims, the judiciary treats all parties fairly, regardless of their religion.”

He added, “Golani’s meeting with the Christian residents is proof that he cares about them and their problems, and he promised to find solutions to any problem according to the judiciary to make sure the Christians in Idlib will not be wronged.”

Orwa Ajoub, a researcher specializing in jihadi groups who currently resides in Sweden, told Al-Monitor, “Golani met with the Christians for propaganda purposes. However, this does not necessarily mean there is no improvement in HTS’s policy toward minorities in Idlib. Golani wants to convey that Idlib is not a jihadist, sectarian area, but rather a semi-moderate Islamic state that is not hostile toward minorities. HTS has neutralized the hard-liners who refuse to deal with minorities fairly. It began forming committees to reconsider the rights of minorities that were previously violated. There is an improvement in HTS’s treatment of Christians, especially since 2018, but Christians still suffer from a lot of harassment.”

Abu al-Majd al-Hamawi, a researcher at the Istanbul-based Jusoor Center for Studies, told Al-Monitor, “Golani is working on a project to have HTS transition from a mere faction to a state-like entity, so he communicates with minorities, be it Druze or Christians, in Idlib to help support his project. Some HTS leaders are calling on Christians to return to Idlib, promising to restore their rights. However, Christians are still reluctant to believe such promises, as they fear some hard-liners within HTS would be vengeful.”

Hamawi added, “I do not believe Golani differentiates between minorities when it comes to their civil rights. Golani’s government controls all public and some private properties. This control over property is not linked to the person's religious origin. Rather, he (Golani) mostly checks if the person has ties to the Syrian regime or to the Islamic State. Golani tries to reassure others that his Sunni project does not conflict with the interests of other religions. In any case, it is still an ideological project that has nothing to do with the civil state.”