The leader of Hayat Tahrir al-Sham, Abu Mohammed al-Golani, continues to market himself as a moderate leader. 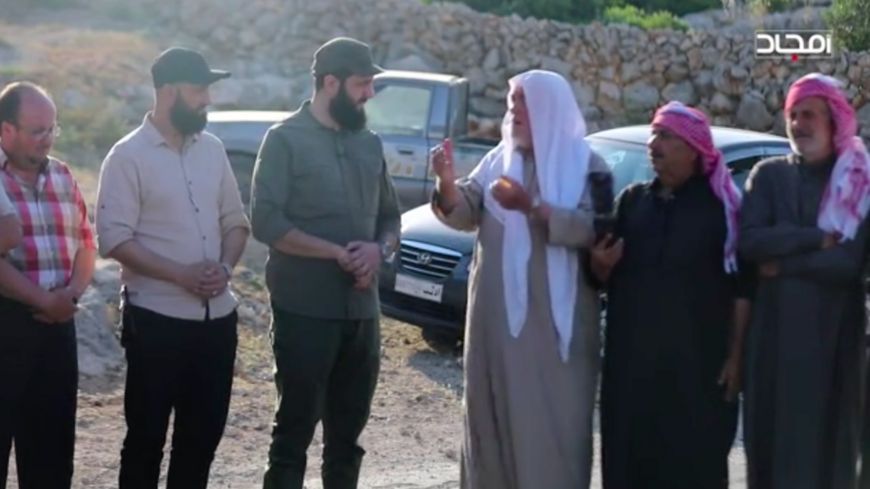 The leader of Hayar Tahrir al-Sham (HTS) in Syria’s northwestern province of Idlib, Abu Mohammed al-Golani, continues to promote his image as moderate and close to the public through a series of propaganda efforts. On June 9, he inaugurated a well project to supply water to several villages of the Druze-majority Jabal al-Summaq area of the northern Idlib countryside.

The HTS-affiliated Amjad Media Foundation published a video of Golani meeting with the notables in Jabal al-Summaq. He promised to improve conditions there while highlighting the services already provided by HTS and its affiliated Salvation Government.

Golani also stressed that his visit did not contain any political messages and was entirely focused on providing services to several areas of northwestern Syria.

However, Golani’s remarks during his visit to Jabal al-Summaq were widely seen as religious and as shifting the blame for the abuses against the inhabitants away from HTS. There have also been several questions about the water well project, the details of which have yet to be made public.

During his visit, Golani absolved himself and his group of any responsibility for previous attacks and harassment suffered by the area’s population, in reference to the massacre that took place at the hands of Jabhat al-Nusra (formerly HTS) members in the Qalb Loze village of Jabal al-Summaq on June 10, 2015, when 20 Druze were killed.

A few days after the massacre, Jabhat al-Nusra said that some of its members took part in the incident without orders to do so, in a clear violation of the leadership’s directives. It sent a delegation to the village to reassure the inhabitants and underscore that what happened was unjust and without the leadership’s knowledge.

Speaking to Al-Monitor on condition of anonymity, an Idlib-based media activist said, “Golani’s visit to Jabal al-Summaq is a notorious ploy designed to make him seem very popular among the inhabitants in areas under his control. But only the fools would believe that. Everyone knows that his empty visits, which are similar to [Syrian President] Bashar al-Assad’s public appearances, cannot cover up the dire economic and security conditions prevailing in these areas.”

Golani has made several public appearances in the past few years to promote his reputation as a moderate leader and boost HTS’ popularity as prices have soared and living conditions deteriorated.

In May, videos circulated of Golani touring the market in Idlib city on Eid al-Fitr surrounded by hundreds of heavily armed security forces, including some in civilian clothes, amid a large crowd of civilians.

In March, Amjad Agency published photos of a meeting between Golani and a number of figures and dignitaries in northern Syria. The agency claimed the visit came at the invitation of the Jabal al-Zawiya area's residents.

Golani was also seen in public on Jan. 31, when he accompanied ministers and officials of the HTS-affiliated Syrian Salvation Government to the Deir Hassan displacement camp. Amjad Agency reported that the visit came as part of a campaign to support the displaced during the winter months.

On Jan. 7, Golani attended the inauguration of the Aleppo-Bab al-Hawa road alongside the prime minister of the Syrian Salvation Government, Ali Keda. The road, which is the first major project carried out in areas outside the control of the Syrian regime, cost about $2 million, and is about three kilometers (two miles) long.

In November 2021, Golani met with representatives of the Salvation Government’s Ministry of Economy, sponsored by HTS’ Shura Council, to discuss the economic situation in northern Syria and the bread crisis.

In August 2020, Golani appeared at a restaurant in the city of Idlib. HTS-affiliated activists posted videos and photos of Golani talking to civilians and helping prepare meals. In May 2020, Golani visited a camp in northern Syria and held an audience for the displaced residents.

Wael Alwan, a researcher at the Jusoor Center for Studies and Development residing in Turkey, told Al-Monitor, “Through these projects, Golani seeks to promote his image as being close to civilians and to the camps’ residents. This time, he wants to be seen as close to the Druze community in Idlib countryside to show that he is keen to protect the various sects in HTS-held areas, just as he promotes his image as someone who protects Christians. Golani intends to send to the Western countries who are interested in the Syrian file the message that he is a moderate leader close to all social components and who has a wide popularity in the area.”

In January, The Washington Post reported that HTS seeks recognition as a moderate Islamist movement and is working to win the local population’s support and be recognized by the United States and other countries as a political organization unmarked by extremism and oppression. HTS also seeks to show the world that it has successfully established a state in its areas of control in northern Syria and is capable of running public services as wells as economic and educational affairs.

Fadel Abdul Ghani, head of the Syrian Network for Human Rights, told Al-Monitor, “HTS continues to harass religious minorities and to prevent them from practicing their rituals freely. These religious faiths are not represented in the official bodies governing the area, as HTS solely controls the government."

He concluded, "These visits cannot erase the accusations that HTS is a [terrorist] group.”