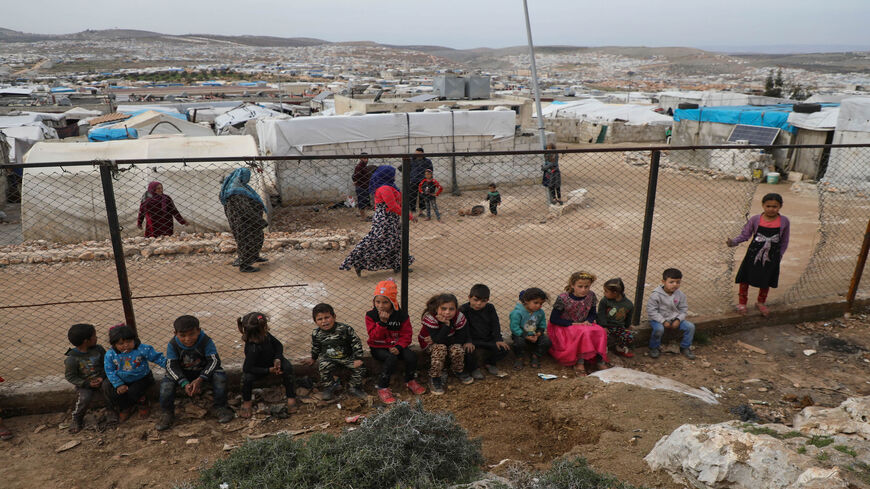 Children sit along a fence at a camp for displaced Syrians in Deir Hassan village, in Idlib's northern countryside near the Turkish border, March 5, 2020. - Aaref Watad/AFP via Getty Images

On Jan. 31, Golani visited Deir Hassan camp, north of Idlib, to launch a campaign called “#Your Warmth_Is_Our Duty” in support of the displaced during the winter months.

Golani offered an estimated $1 million to provide heating to the families affected by the winter weather. The financial aid will be granted to the concerned authorities in the Ministry of Development of the HTS-affiliated Salvation Government, which will then distribute it to the roughly 50,000 affected families.

In a speech during his visit to Deir Hassan camp, Golani said that signs of growth and construction were starting to emerge in the area amid efforts to solve problems through emergency solutions. He also promised a project to replace tents with decent homes, while striving to solve the suffering of the people without relying on relief.

Golani had also vowed to launch economic projects when he appeared at the inauguration of the Aleppo-Bab al-Hawa road on Jan. 7. These projects include preserving human resources, establishing educational institutions and maintaining competencies in society.

On Nov. 23, 2021, Golani took part in a meeting sponsored by HTS’ Shura Council with the Ministry of Economy in the Salvation Government to discuss the economic situation, especially the bread crisis, in northern Syria. He tackled the problem of food security in the Idlib region and proposed solutions, while promising economic improvement, gradual recovery and the urgent subsidy of bread.

Golani’s moves sparked widespread controversy and criticism on social media, with activists mocking him for trying to appear as a humanitarian activist instead of a military leader.

Most social media activists mocked Golani’s $1 million donation to the displaced in Deir Hassan camp. Golani had appeared in civilian clothes and met with a number of residents of Deir Hassan camp in the northern countryside of Idlib. Pictures circulated of him listening to the complaints of civilians about the difficulties they face, especially in the winter season.

Many activists described Golani’s donation as part of the propaganda that HTS promotes for itself and its leader.

Meanwhile, HTS supporters viewed the move as proof that Golani follows up on civilian affairs and seeks solutions to their problems, and that this is one of the characteristics of a leader concerned with the conditions of his community.

Orwa Ajjoub, a researcher on jihadist groups, told Al-Monitor, “It is difficult to tell where Golani got the money from that he donated, but he seems to be moving toward institutional work and the [money] is legal because it comes from the Salvation Government. Golani wants to show that HTS is a state and not a militia, and that he is seeking solutions for the civilians who fall under his control.”

He said, “At the same time, Golani wants to convey messages to the community that Idlib is a state, with the aim of improving his image to both the international and local community while delivering a message to relief organizations that he is a partner.”

Ajjoub added, “The criticisms that Golani faced will play out in his favor, as they show that there is freedom of expression in Idlib, and this criticism is acceptable [for HTS] as long as it does not cross the red lines set by HTS.”

Mohammed al-Omar, an Idlib-based media figure close to HTS, told Al-Monitor, “Golani’s image does not need to be improved in Idlib, as the social media websites and cross-border defamation faced by HTS do not reflect the Idlib community. Also, what can improve HTS’ image are good security conditions and checkpoints that treat civilians with respect and do not accept any bribe from any driver, as is the case in the areas under the control of the Syrian Democratic Forces, among others. Security can also be improved so that women can run their errands alone in the middle of the night and media delegations and visitors are kindly received and well treated.”

He noted, “Golani is not seeking any external benefits as he is working for the benefit of civilians, and the donation he announced is government money and not his personal money as some are saying. Those who attack every step that Golani takes do so because they hate him. They are a bunch of theoreticians. Golani is working hard on the ground.”

Omar al-Hamwi, a humanitarian activist who resides in the northern countryside of Aleppo, told Al-Monitor, “The amount that Golani donated is part of the money that HTS collects as humanitarian aid meant for the people of Idlib and the displaced. HTS and its leader are looking to improve their image in the media, which explains the donation. I do not think that the image of Golani, or that of HTS, will ever improve, as the amount will reportedly be distributed to 50,000 families, meaning that each family’s share will be $20, which covers the cost of heating for only three days, especially in light of the exorbitant heating cost in Idlib.”

Khaled al-Terkawi, a researcher residing in Turkey, told Al-Monitor, “The money that Golani announced is from the Salvation Government, which collects it from investments, taxes, arms trade and services. Golani started to engage himself in the economic aspect in order to attract investments that would ultimately benefit HTS. There is no doubt that when HTS offers civilians something that alleviates their suffering, this contributes to improving its image.”