Abu Mohammed al-Golani, the leader of Hayat Tahrir al-Sham, continues to appear in public as he promotes his image as a leader who cares about the inhabitants of northwest Syria. 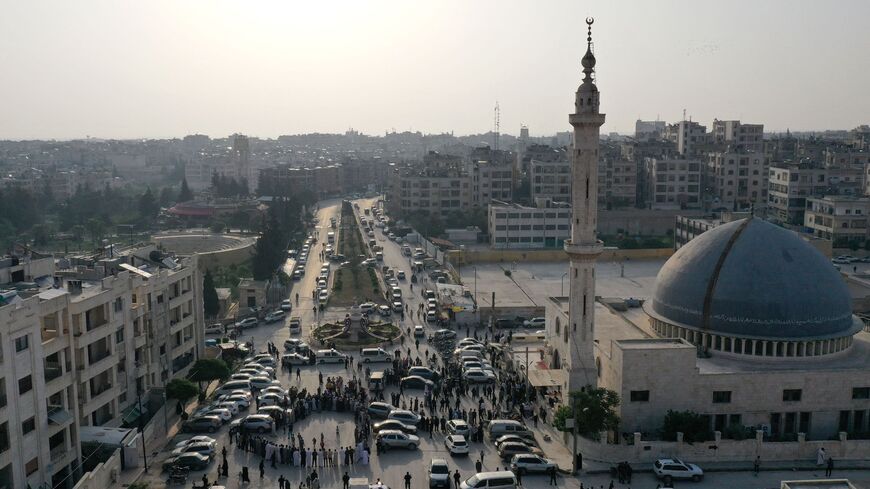 A picture taken on May 2, 2022, shows traffic outside Al-Shueib Mosque in Syria's rebel-held northwestern city of Idlib during prayers on the first day of Eid al-Fitr. - OMAR HAJ KADOUR/AFP via Getty Images

The leader of Hayat Tahrir al-Sham (HTS), Abu Mohammed al-Golani, has made another public appearance. He took part in the Eid al-Fitr festivities in the marketplace of the city of Idlib, northern Syria, on the night of May 1.

Videos are circulating of Golani surrounded by dozens of heavily armed men, some in civilian clothes, as he walked in the city’s main souk as a crowd of residents took photos with him.

The crowds chanted welcoming messages for Golani such as “Long live our emir.”

A media activist in Idlib told Al-Monitor on condition of anonymity, “Golani’s visit to Idlib city is an outrageous and common ploy designed to show that he is very popular and supported by the residents in the HTS-controlled areas." Only fools would fall for it, he said. "Everyone knows that much the crowd in the souk was his own security staff. His public appearances cannot distract from the dire economic and security situation in HTS’ stronghold. The way he showed up in the souk is similar to how Syrian regime President Bashar al-Assad does in areas under his control.”

Since early 2022, HTS has been trying to promote Golani's image as a popular leader working to protect civilians from the HTS-affiliated institutions in Idlib.

In late March, HTS’ official media outlet the Amjad Agency published photos of a meeting between Golani and a number of figures and dignitaries in northern Syria. The agency claimed the visit came at the invitation of the area's residents.

During the meeting, Golani outlined the services offered in HTS-held areas and indicated that they are the least HTS could do for the loyal population of Jabal al-Zawiya, caught near the fighting with the Syrian regime forces. He stressed that the Jabal al-Zawiya area is no longer threatened by offensives by the Syrian regime. Golani also praised the fighters stationed in the area and expressed confidence in their abilities.

Golani was seen in public twice in January. On Jan. 31, he accompanied ministers and officials of the HTS-affiliated Syrian Salvation Government to the Deir Hassan displacement camp. Amjad Agency reported that the visit came as part of a campaign to support the displaced during the winter months.

On Jan. 8, Golani and the Salvation Government’s prime minister, along with a substantial security detail, inaugurated the Aleppo-Bab al-Hawa Road and promised the area's residents more economic projects and vowed that living conditions there would improve. The three-kilometer highway took five months to be completed at a cost of nearly $2 million. Meanwhile, the living and security conditions in the HTS-controlled areas have worsened.

On Nov. 21, 2021, Golani met with representatives of the Economy Ministry in the Salvation Government to discuss the bread crisis in northern Syria amid the depreciation of the Turkish lira.

In August 2020, Golani appeared at a restaurant in the city of Idlib. HTS-affiliated activists posted videos and photos of Golani talking to civilians and helping prepare meals. In May 2020, Golani visited a camp in northern Syria and held an audience for the displaced residents.

Ahmed Mazhar Saado, a freelance writer and journalist based in Turkey, told Al-Monitor, “Golani has been trying over the past two years to present himself as a state and community leader who is close to the people and who cares about the interests of the residents. His public appearances suggest that the international community no longer rejects HTS’ presence, but rather accepts HTS’ executive dominance over Idlib.”

He added, “It seems Golani has convinced the West that HTS is a moderate Islamist military organization that completely cut ties with al-Qaeda and that it no longer poses a threat to US interests in the region." The change is evidenced by "HTS’ fight against extremist organizations and its persecution of their members.”

In January, The Washington Post reported that HTS seeks recognition as a moderate Islamist movement, working to win the local population’s support and be recognized by the United States and other countries as a political organization unmarked by extremism and oppression. HTS also seeks to show the world that it has successfully established a state and is capable of running it.