In a new attempt to improve the image of Hayat Tahrir al-Sham, the group’s leader appeared in public in modern clothing to inaugurate a new road linking Aleppo to Bab al-Hawa. 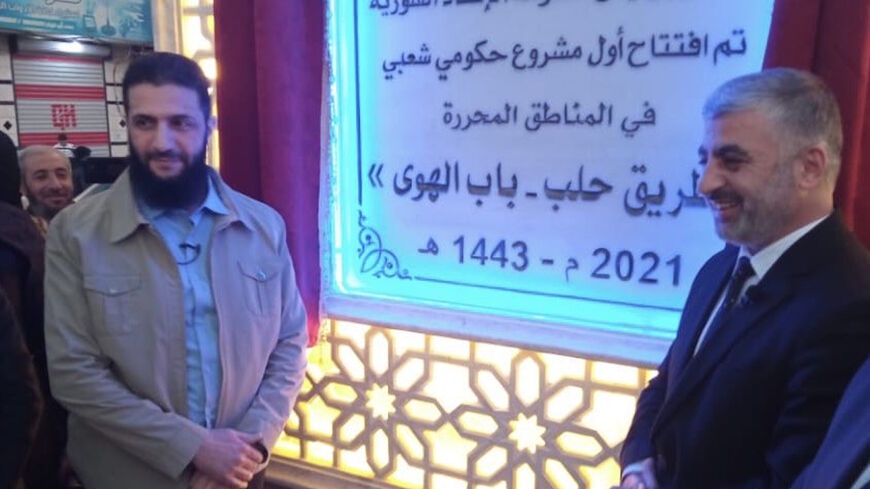 Unlike all other leaders of extremist organizations, Hayat Tahrir al-Sham (HTS) leader Abu Mohammed al-Golani attended a public event in Idlib, displaying zero concerns about being targeted by the international coalition warplanes that pursue extremist leaders in northern Syria.

On Jan. 7, Golani participated in the opening of the Aleppo-Bab al-Hawa road alongside the prime minister of the HTS-affiliated Syrian Salvation Government, Ali Keda. The project is the government’s first major project carried out in areas outside the control of the Syrian government.

Golani appeared in public wearing modern clothes, which raised questions on social media. Many believed his outfit was an attempt to come across as “moderate,” although HTS was previously known as al-Qaeda-affiliated Jabhat al-Nusra. The group is designated a terrorist organization by the United States and the UN Security Council.

This isn't Golani's first attempt at a makeover. In June last year, he did a television interview with American journalist Martin Smith of PBS in a blue suit rather than his usual robes.

Photos from the road opening went viral, showing Golani standing next to Keda in the city of Sarmada, 30 kilometers (19 miles) north of Idlib. The roads leading to Sarmada were secured by the HTS security services that prevented some media outlets from covering the event.

The Syrian Salvation Government said this road was the first project it implemented in the liberated areas. The construction of the road, which cost about $2 million, lasted about five months. The road is about 3 kilometers (2 miles) long and 30 meters (98 feet) wide, according to unofficial sources. It is fully lit by about 70 lighting poles, according to sources close to HTS.

The opening ceremony was attended by several members of HTS’ General Security Service operating in Idlib, which provided security for the event.

In a speech at the ceremony, Golani described the opening of the road as a “revolutionary achievement,” saying that it was “a comprehensive effort from every liberated individual in the area, including traders and workers.”

He had previously made a public appearance in August 2020, when he visited a restaurant in the city of Idlib. Activists affiliated with HTS published videos and photos of him talking to civilians and helping prepare the food. This helped increase his popularity at the time.

In May 2020, Golani also visited a camp in northern Syria. He was seen carrying a notebook and pen, writing down the residents' demands.

The newly paved Aleppo-Bab al-Hawa road is located near a camp where hundreds of displaced families live under difficult conditions and can barely afford to put food on the table. The camp’s residents were extremely angered by the project and criticized the Salvation Government for it.

Meanwhile, the government forces and Russia have escalated their attacks against the areas of northwestern Syria over the past few days.

The recent escalation hit the countryside of Idlib, killing civilians and damaging vital local facilities. Idlib’s sole water station was out of service after a Russian airstrike targeted it Jan. 2.

Golani also attended a meeting with representatives of the Salvation Government’s Ministry of Economy on Nov. 23, 2021, sponsored by HTS’ Shura Council, to discuss the economic situation, namely the bread crisis in northern Syria, in light of the depreciation of the Turkish lira.

In February 2021, the US State Department’s Rewards for Justice Twitter page posted Golani’s picture with a sarcastic comment saying, “Hey, handsome Golani, what a sweet suit. You can change your outfit, but you will always be a terrorist. Don't forget the $10 million reward.”

Under Golani’s rule, HTS had sought to get closer to the West, as it changed its name from Jabhat al-Nusra to Fatah al-Sham, declaring that it was no longer associated with Jabhat al-Nusra and al-Qaeda.