The fallout continues over the PBS documentary on Abu Mohammed al-Golani, leader of Hayat Tahrir al-Sham, which controls Syria’s northwestern province of Idlib. 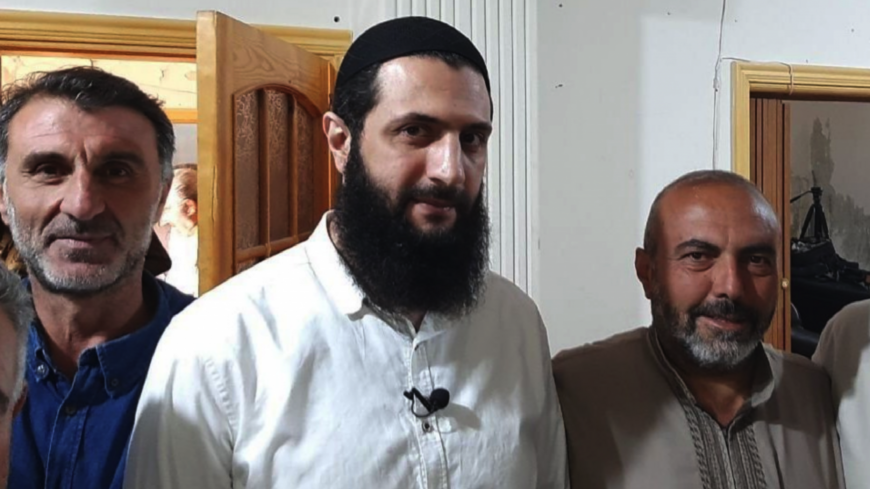 An undated image of Abu Mohammed al-Golani (center) posted to Twitter on May 30, 2020. - TWITTER/SyriaDirect

The documentary sheds light on a part of Golani’s character that many in the Syrian opposition had known nothing about since he founded Jabhat al-Nusra in 2012.

Meanwhile, HTS revealed full details on its leader in an infographic posted on its Telegram account on June 6, dubbed “Who is Abu Mohammed al-Golani?”

HTS' media coordinator, Taqi al-Din Omar, told Al-Monitor the infographic is designed to provide additional personal information on Golani so as to complement the info provided in Smith’s interview.

The interview, in which Golani appeared with a fashionable haircut and in a snappy blue suit rather than his usual robes, has been widely perceived as part of a makeover campaign to coincide with HTS's public relations effort to portray Golani and HTS as a mainstream, nationalist opposition group fighting the government of Syrian President Bashar Al-Assad.

HTS is an offshoot of al-Qaeda and is designated a terrorist organization by the United States and the UN Security Council.

According to the infographic, Golani’s real name is Ahmed Hussein al-Shara. He was born in Riyadh in 1982 and remained there until the age of 7 before he moved to Damascus where he grew up. Golani entered the Faculty of Media at the University of Damascus. A life-changing event occurred for Golani when he was advised to go to the mosque and attend prayer. He was accompanied by a sheikh who taught him the interpretation of the Quran, the stories of the prophets and the teachings of the true religion.

Golani dropped out of school and traveled to Iraq in 2003 where he spent eight years before moving back to Syria following the 2011 revolution and joining his fellow countrymen in the squares.

At the military level, the infographic continues, Golani joined a small group of jihadists in Mosul who were fighting against US forces after their invasion of Iraq in 2003. Later, he joined jihadist groups affiliated with al-Qaeda led by Abu Musab al-Zarqawi, who was killed in mid-2006.

Golani was then arrested by the US military in Mosul in 2006 and held at the Abu Ghraib, Bucca and Cropper prisons in Iraq. Although it is not clear when, he was then handed over to Iraqi forces who locked him up for five years at the Camp Taji prison before releasing him in 2011. In prison, he taught the interpretation of the Quran and Arabic language and sought to correct many misconceptions among prisoners. He also voiced his expectations about the future of the region.

Golani left Camp Taji prison in March 2011. He returned to Syria a few months after the revolution accompanied by a few people to establish Jabhat al-Nusra. In July 2016, he founded Jabhat Fatah al-Sham, which — in addition to a number of factions — formed HTS in 2017, according to the HTS infographic.

In this context, Abbas Sharifa, a researcher at Jusoor for Studies in Istanbul, told Al-Monitor the information recently released about Golani was not targeted at Syrians. The information featured in the infographic had already been revealed by Golani during his interview with Smith, and so, Sharifa wondered, why Golani refused over the past years to share with the Syrian people his personal information while he agreed to disclose it only to the American journalist.

He added, “I personally, and some private sources, had the bulk of this information about Golani, but it was only as part of circulated rumors. Now, this information was confirmed by Golani himself (in the interview with Smith), which makes it official.”

Smith’s documentary, titled “The Jihadist,” raised criticism in Salafi jihadist circles opposed to HTS in Idlib. They accused Golani of breaking away from the jihadists’ traditional approach and opening channels with the West so as to promote himself and have HTS’s name removed from the global classification of terrorism. On the other hand, prominent members of HTS’s Shura Council exchanged accusations with the critics and denounced them as haters driven by their personal detest of Golani no matter what he says or does.

Smith also spoke with residents of HTS-controlled areas who decried attempts to whitewash the group’s actions. “There is torture, and it’s brutal torture, and there are barbaric methods being used by these terrorists,” said Mohamed Al Salloum, a Syrian whose brother was executed after criticizing HTS on social media.

Abu Maria al-Qahtani, an Iraqi and a member of HTS’s Shura Council, defended Golani on Telegram. He said that “every time Golani appears in an interview, the snakes come out of their holes to forge history through Telegram and Twitter.” While HTS makes moves on the ground, all they do is criticize Golani on social media, he said.